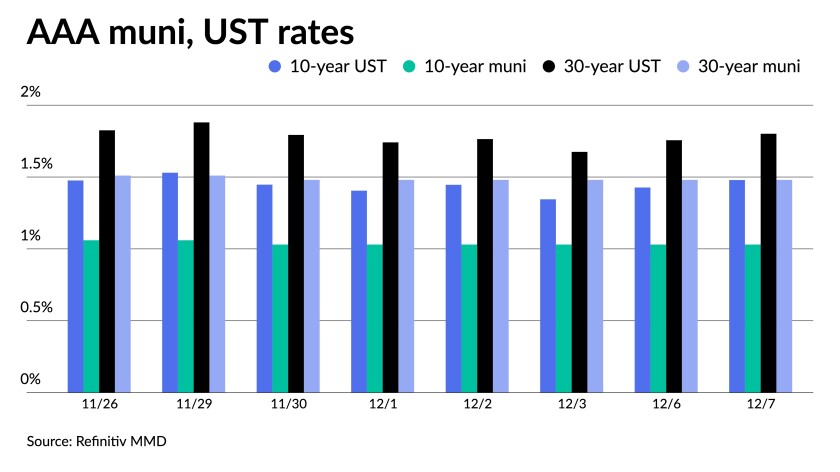 Trading was down 18% from Monday, which was already a light day at $5.6 billion par traded, as new issues were the focus and provided some direction.

The 30-day visible supply dropped to $13.54 billion with still a large chunk of new issues to be priced Wednesday and Thursday. The bulk of the month’s new issues are likely front-loaded and most analysts expect the primary to quiet down closer to the holidays.

Treasuries were weaker and equities rallied.

All eyes on inflation, Fed
With the Federal Open Market Committee meeting next week, the market remains focused on inflation and what the Federal Reserve will do about it.

Fed Chair Jerome Powell told Congress the panel will discuss accelerating the taper of asset purchases and with a new Summary of Economic projections, the market will get a clearer picture of what the decision makers expect in terms of rate hikes.

“The scale and longevity of the global inflation shock has taken most forecasters and central banks by surprise and is bringing forward the start of global monetary policy normalization,” according to an outlook published by Fitch Ratings.

Inflation forecasts have been revised higher, Fitch said, “and the increasing prospect of inflation pressures broadening is making central banks nervous.” Core consumer price index “inflation is expected to settle at around 3% in late 2022 and 2023, significantly higher than pre-pandemic rates.”

As a result, Fitch sees the Fed raising rates in September 2022. “The Omicron COVID-19 variant of concern represents a downside risk to growth but could adversely affect supply leading to further price increases, implying risks if central banks delay normalization.”

Fiscal stimulus and Fed intervention “provided a much-needed bridge” early in the COVID era. But one side effect has been rising inflation and wages, according to Grant Thornton Chief Economist Diane Swonk.

“The question for the Federal Reserve is whether what we are enduring will morph into a more entrenched, wage-price spiral, in which wage hikes start to feed into inflation,” she said. “That would require an aggressive jump in rates.”

The firm expects an announcement of an accelerated taper, with a March conclusion of purchases, which will allow the first rate hike in June, followed by two others in 2022.

In recent Congressional testimony, Powell “underscored his concern inflation is becoming broad-based,” Swonk said. “He is not alone. Fed officials as a group have grown far more concerned about the persistence of inflation, even as commodity prices have cooled. This could prompt them to act much more aggressively than currently forecast.”

And inflation, at the highest rates in a generation “shows few if any signs of slowing in the near term,” said Wells Fargo Securities Chief Economist Jay Bryson, Senior Economist Sarah House and Economist Michael Pugliese. “Along with the rapidly tightening labor market, the persistence of inflation pressures has committee members rethinking where policy needs to be positioned to balance the current risks to the outlook.”

They see the FOMC speeding up taper and asset “purchases wrapping up in April 2022 instead of June 2022.”

And the dot plot, to be released after the Dec. 14-15 FOMC meeting may show “a more hawkish tilt,” possibly projecting “at least two 25 basis point rate hikes in 2022, followed by an additional three hikes in both 2023 and 2024,” they said. “That would put the median estimate for the fed funds target range at the end of 2024 at 2.00%-2.25%. Although below the FOMC’s longer-term estimated rate of 2.50%, that is above current market pricing and could feel to some at the party that the punchbowl is being removed.”

In data released Tuesday, the international trade deficit narrowed to $67.1 billion in October from $81.4 billion in September. This was the second largest gain on record (which began in the early 1990s), and was driven by rising exports.

“Our best read is that today’s narrowing in the trade deficit is likely more a story of monthly volatility rather than the start of a sustained narrowing in the deficit,” said Wells Fargo Securities Senior Economist Tim Quinlan and Economist Shannon Seery.

Separately, third quarter productivity was revised to a 5.2% drop from the 5.0% decline initially reported. Productivity rose 2.4% in the second quarter.

Unit labor costs were 9.6% higher in the quarter, up from the 8.3% gain seen in the initial report, after a 5.9% gain in the second quarter. This suggests price pressures will linger.

The Dormitory Authority of the State of New York will sell $2.469 billion of personal income tax revenue bonds consisting of $2.141 billion of tax-exempts and $328.08 million of taxables on Thursday.

Can Drones Save Ambarella?
How Long Should You Spend on Analyzing a Stock Chart
Can J.C. Penney survive?
Why is Protagonist Therapeutics (PTGX) Soaring 90% Today?
How To Trade False Breakouts: Beginner Guide