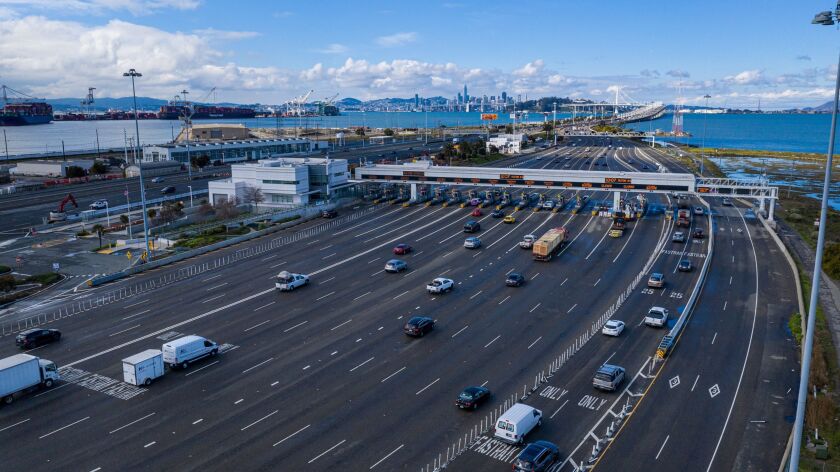 The Bay Area Toll Authority’s plans to price $1.3 billion in toll bridge revenue bonds next week are expected to see robust demand, even as the seven-bridge system sees a softer pandemic recovery than other tollway credits in the U.S.

The pricing will stretch over three days from Monday through Wednesday. Pre-pricing for the index and term bonds begins Monday with pricing Tuesday, and taxable and tax-exempt fixed rate bonds price Wednesday. The deal is comprised of four sets of senior-lien bonds and $264.9 million in subordinate fixed-rate bonds.

Moody’s Investors Service ticked off several strengths, including a near monopoly on bridge crossings and the affluence of the area, in affirming its Aa3 rating on BATA’s senior-lien bonds ahead of the deal.

But Moody’s also noted that BATA’s leverage is among the highest for Moody’s-rated toll credits, and its debt structure has a heightened floating rate and market access risk relative to peers.

BATA, like all toll systems, was impacted by the COVID-19 pandemic, but the “San Francisco Bay Area vehicle travel and commute patterns were particularly affected owing to a combination of more stringent lockdowns and a higher percentage of jobs eligible for remote work than in comparable metropolitan regions,” Moody’s wrote in its rating report.

“California’s economy is generally lagging the rest of the nation,” Mayhew said. “We are at 7% unemployment, while unemployment nationally is 5%.”

The Bay Area is also affected by being home to Silicon Valley tech firms, where workers have more flexibility to work remotely. That high concentration of tech employment begs the question of whether those workers will ever return fully to the office.

“We are already seeing the effects that work-from-home has had on the bridges that cross to the Silicon Valley,” Mayhew said. “Those bridges are down double compared to the other bridges. It is starting to give us a picture of what the future will be like.”

BATA is also adjusting to a decision to fully automate payments on its bridges, eliminating cash collections, Mayhew said. BATA was developing long-range plans to do so, but halted cash collections suddenly when the pandemic struck.

“The combination of the change to work from home, or a hybrid model of working in the office and at home, and the fact there are people who won’t cross the bridge, because they can’t pay cash… I don’t know how long it takes to fully recover from both of those,” Mayhew said.

Beyond those caveats, BATA actually came into the pandemic in good shape, because it had robust reserves, though it has had to draw on those reserves.

“We had 18 months of reserves on hand, in case of a regional disaster, we obviously never anticipated the pandemic,” he said.

CreditSights in a Friday report described BATA as a strong credit due to its large, seven-bridge system in the affluent San Francisco Bay Area.

“BATA recently completed a large capital plan, which renovated its facilities, including seismic retrofitting,” CreditSights analysts wrote. “Tolls are affordable and demand is generally inelastic due to a lack of competing options. We expect strong demand.”

Moody’s maintained a positive outlook on the US toll road sector Thursday, saying in its report that it expects “median tolled traffic and revenue growth will continue to exceed 2% and 4%, respectively, through 2022.”

“The positive outlook incorporates the continued delinking of general mobility from the local COVID-19 case count as we learn to live with the virus,” Moody’s analysts wrote.