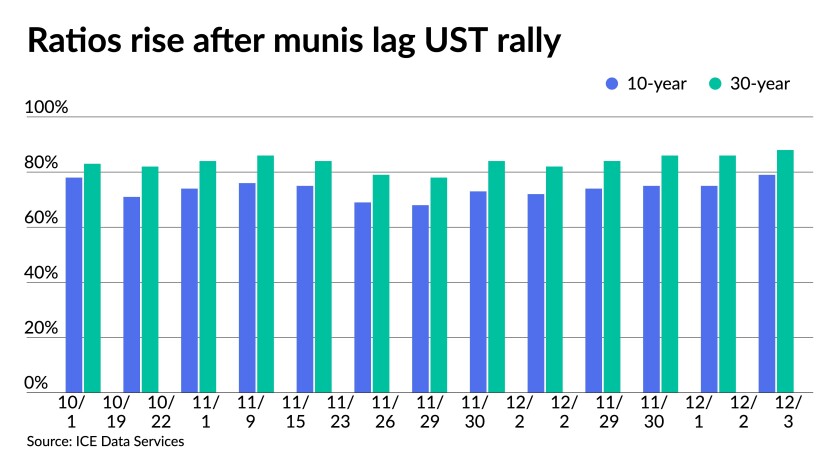 After a full seven trading sessions of volatility in U.S. Treasuries and equities, municipals ended Friday quiet, little changed, and again ignored the moves in other markets.

Treasuries saw yields fall and equities sold off on lower-than-expected employment figures while triple-A municipal benchmark yields were steady to firmer by a basis point in spots.

Investors will be greeted by a $15 billion-plus new-issue calendar on Monday, with $13.748 billion of negotiated sales and a drop in competitive deals to $1.395 billion.

What’s to come in 2022
While the year is not over yet, 2021 seems to be turning out largely as expected for municipals, according to Barclays PLC.

Barclays strategists Mikhail Foux, Clare Pickering and Mayur Patel said munis are having a very robust year — at least when compared to other fixed-income asset classes — as the U.S. economy recovers.

The market has performed well, but its total return performance has been hindered by higher rates, they said. Given this, even 1% to -1.5% total returns for high-grade munis “does not look too bad” and are in line with Barclays’ year-end projections.

“In the first half, the market was overly optimistic about much higher corporate and individual tax rates, driving MMD-UST ratios to their all-time lows, but once it came to the realization that such rates might not come to fruition, muni valuations relative to Treasuries eased up a bit,” they said.

While their high-grade outlook was slow at the start of the year, they were more optimistic about municipal high yields. The high-yield sector has outperformed forecasts this year, making it the top-performing fixed-income asset class in the U.S., the report said.

“We think, however, that it will be very difficult to match this year’s performance in 2022, and all signs point to a much harder year ahead for munis and most other fixed-income asset classes,” they said.

On one hand, the market will be confronted with rising inflation, tapering and possibly even rate hikes in the second half of the year. But on the other, the U.S. economy will continue to recover, with gross domestic product nearing 4% and inflation slowing in the second half of the year, while Treasury yields are unlikely to fall much further from present levels, the report said. More rate volatility is forecast, particularly in the first half of 2022, although the market will likely settle as the year proceeds, according to strategists.

“Even though market technicals should remain largely supportive, and municipal credit, at least for now, is in very good shape, we do not see much potential upside. Munis are still rich to Treasuries, and we expect ratios and credit spreads to move somewhat higher next year,” they said.

As a result, they anticipate lower municipal returns next year. At present values, the asset class will have a tougher time cushioning any rate volatility, thus portfolio positioning will be crucial.

Treasuries rallied and equities sold off.

The four-week moving average remained positive at $1.013 billion, after being in the green at $1.155 billion in the previous week.

Mixed views of a mixed employment report
There’s not total agreement about Friday’s employment report or what it will mean to the Federal Open Market Committee when they meet on December 14 and 15.

While most have called the report weak based on the addition of 210,000 nonfarm payrolls jobs in November (economists polled by IFR Markets expected 653,000), others point to the drop in the unemployment rate to 4.2% and the rise in the participation rate as factors that offset the lower-than-expected headline number.

“Payroll gains in November were disappointing, missing expectations by a significant margin,” said Veneta Dimitrova, senior U.S. economist at NDR. “Even adjusting for the upward revisions in the previous two months, the employment report was a miss.”

The report “should be taken with a grain of salt,” said Grant Thornton Chief Economist Diane Swonk. “The establishment data has not only consistently been revised up in recent months as more data became available, but it is increasingly hard to seasonally adjust the data given the distortions created by the pandemic. The number swings are too large to capture with the old rules of thumb used to make those adjustments.”

Scott Ruesterholz, a portfolio manager at Insight Investment, agreed. “The deeper one digs into today’s report, the stronger it looks.” He pointed to household employment and the participation rate. “Without seasonal adjustments, jobs growth was nearly 800k with adjustments weighing heavily on sectors like retail,” he said. “Given the unique nature of an economic reopening amid a pandemic, past seasonal trends could be somewhat distorted.”

So how will the Fed see it?

“The Fed may view this as a positive employment report as minority unemployment improved significantly and the participation rate is now only 1.5 percentage points lower than in February 2020,” said Edward Moya, senior market analyst at OANDA. “Fed rate hike expectations are settling around two rate hikes next year.”

And while labor participation increased in November, it remains below pre-pandemic levels. The “report showed some improvement in prime-age participation, but not enough to ease tight labor market conditions,” said NDR’s Dimitrova. While Omicron poses “a near-term downside risk,” she expects taper to be accelerated, with liftoff possible next summer.”

The report will likely give the Fed confidence in a strong labor market recovery, Insight’s Ruesterholz said. “Over this past week, there has been building consensus from Fed officials that tapering should be accelerated in December. We do not expect this jobs report to derail that.”

Without a major COVID issue from Omicron “or a surprisingly poor CPI report next week, a doubling of the taper pace to $30 billion in December is our base case,” Ruesterholz said. “This would mean taper ends in March 2022, which would position the Fed to lift off in the summer of 2022, though the exact timing of liftoff will depend on how employment and inflation develop over the next six months.”

ING’s Knightley also noted the Fed’s “clear appetite to normalize policy more quickly.” Inflation figures could “push close to 7% next week,” he said, so expect the Fed to taper $30 billion a month starting in “January and the realistic prospect of three rate hikes in 2022 — Omicron permitting.”

The acceleration of taper will be approved by the FOMC this month, Grant Thornton’s Swonk predicted, with taper complete by May. “That will leave the door open for a liftoff in rates in June.”

While Fed Chair Jerome Powell made it clear the Fed will discuss accelerating taper at its coming meeting, the employment numbers “gives the Committee an out to perhaps punt to its January meeting,” said Wells Fargo Securities Senior Economist Sarah House and Economist Michael Pugliese. The report, they said, “leaves the FOMC in a bit of a gray zone,” since several Fed leaders have talked about speeding up the taper and this “was a clear disappointment in that nonfarm payrolls were well-below consensus expectations.”

Further, they note, slower wage growth could “slightly ease some concerns about a wage-price inflation spiral,” House and Pugliese said. “That said, Fed officials have stressed the importance of labor supply growth, and labor force growth finally showed some signs of a pickup in November.”

The pandemic may have changed the structure of the labor market, said J.P. Morgan’s Kelly, and “pre-pandemic levels of employment may be inappropriate when thinking about the Fed’s full employment objective.”

Looking past the headline, he said, “the pace of recovery remains very rapid and today’s report may well strengthen the Fed’s resolve to consider a faster tapering of bond purchases when they meet on December 14 and 15.”

Besides the headline, State Street’s Loh said, “especially disappointing was the loss of retail jobs and significantly slower hiring from leisure categories, sending signals that structural employment changes are starting to emerge in retailers, while the resurgent virus continues to impact mobility.”

Those trends may continue depending on the severity of Omicron, he added. But there were positives to the report too. “The gain in wages also takes a bit of pressure off the Fed, with average hourly earnings rising a smaller than expected 0.3%, at least temporarily relieving some of the concern that strong wage gains would contribute to the inflation discussion,” Loh said.

Of course, the caveat that this is only one read “that may yet be reversed,” he said, “the Fed’s concern over inflation has likely not worsened.”

Expect an accelerated taper, ending in spring, Loh said, but “the rate hike discussion will remain in flux however, particularly if future jobs reports continue to send mixed signals.”

It remains unclear how COVID “has structurally altered the employment landscape, and Omicron may further obfuscate that understanding,” he said. “Rate hikes are still firmly priced to begin by mid-year 2022, with a flattening of the curve the prevalent response from the rate market, which hints at policy mistake concerns that inflation is forcing their hand at a time when jobs and demand may be challenged.”

“With record tightness in labor markets — 0.7 unemployed persons for every job opening — labor force growth is important,” he said. “While the discrepancy between jobs growth in the payroll survey and the household survey raises some questions, positive movement in labor force growth is especially encouraging.”

Despite fewer workers GDP has surpassed February 2020 levels, Skancke said. “This gap in payroll employment is important to the Fed in achieving full employment, but the new 4.2% unemployment rate is very close to the Fed’s 3.8% ‘natural rate of unemployment’ as a goal of full employment. So, it will be easy for the FOMC in accelerate its taper of bond-buying at its December 2021 meeting.”

The Florida Board of Education (Aaa/AAA/AAA) is set to sell $124.155 million of forward delivery public education capital outlay refunding bonds 2022 Series A at 1 p.m. eastern Monday.

Jessica Lerner contributed to this report.

Can J.C. Penney survive?
How To Trade False Breakouts: Beginner Guide
Can Drones Save Ambarella?
How Long Should You Spend on Analyzing a Stock Chart
Which Big Tech Stock to Buy on the Dip