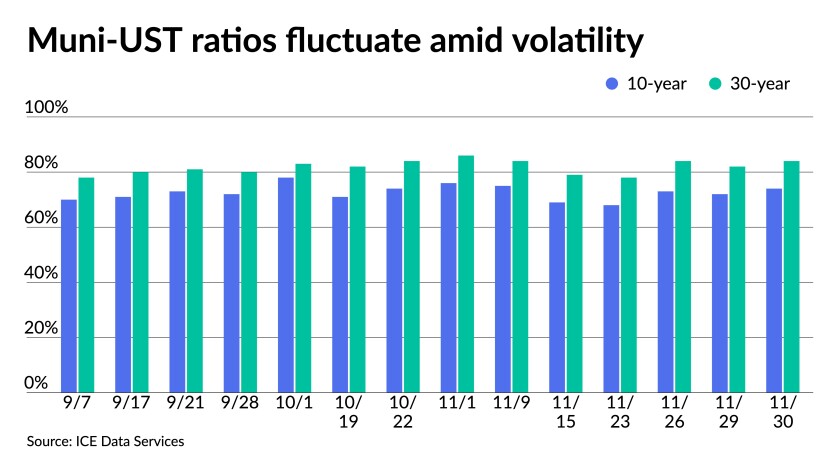 It is appropriate to “consider ramping up tapering” and it will be discussed at the next FOMC meeting, when more information about the Omicron variant and its impacts are known, he said at a Senate hearing.

“More importantly for municipals, the potential for new, pandemic-related risk episodes will only encourage state and local governments to remain defensive with respect to budget management, suppressing or delaying the recovery in issuance of new-money bonds for fresh infrastructure projects while encouraging new rounds of scoop and toss refinancings to free up cash flow,” said Matt Fabian, partner at MMA.

While November volume rose year-over-year, supply still hasn’t kept up with demand, and participants are mixed on how much supply will rise in the coming months as factors outside the municipal space create more uncertainty for issuers. The net-negative supply — currently at $9.83 billion per Bloomberg data — is a key reason to why municipals have outperformed UST.

“It remains difficult, amid persistently negative net supply conditions for tax-exempts, for most municipals, to show much in the way of a negative evaluation/price trend,” according to MMA’s Weekly Outlook. “Rather, negative movements will reflect primary market caution where underwriters set levels as appropriate across other markets, but not secondary weakness produced by selling pressure.”

MMA noted that while fund flows did slow a bit, and “reasonably with the Thanksgiving holiday, but if 2021 flows are to stay ahead of their 2019 record (which showed about $2 billion weekly inflows during December, this year will need a boost of demand momentum.”

Such will be difficult if USTs adopt a negative price trend and muni fund and exchange-traded fund NAVs lack a compelling momentum argument vis-à-vis alternatives.

“But even if 2021 flows fall short of 2019’s record pace, performance does not appear to be at material risk; rather, the next few weeks are more likely to show continuity than the opposite,” the report said.

Treasuries rallied and equities sold off.

“This does sound like a significant change of tone from Powell,” said Brian Coulton, Fitch Ratings chief economist. “It looks like the Fed wants to create some space to give them the option to raise rates well before the end of next year if they feel they need to.”

“Today will go down as the day Fed Chair Powell shed his dovish wings and showed signs of becoming a hawk,” said Edward Moya, senior market analyst for the Americas at OANDA. “An abrupt shift is conveniently timed as less than a week ago he was nominated by President Biden to serve a second term as Fed chair.”

Economists agree it is too soon to determine how Omicron will impact the economy as it has yet to be determined how transmissible it is, how severe an illness it causes, and how the vaccines available hold up against it.

“It is too early to assess if we will need to update all of the COVID vaccines and treatments, but some of the early reports across Europe are that the Omicron cases are mostly mild or asymptomatic,” Moya said. “Financial markets appear to be mostly optimistic that the growth outlook across the US will not be terribly disrupted by the Omicron variant,” he said.

“Until more is learned about the Omicron variant, our base case view remains that the Fed will lift rates later than what is currently priced in the market,” said BCA Research in a note. “We think a September or December 2022 liftoff date is reasonable.”

Panic has lessened from concerns over the weekend after Moderna CEO Stéphane Bancel’s warning that vaccines will be far less effective against Omicron riled the markets.

“From our perch, we remain steadfast in our belief that, despite the uncertainty surrounding Omicron, the virus’ ability to severely impact economy and markets will continue to decline,” said Steve Chiavarone, portfolio manager and head of multi-asset solutions at Federated Hermes. “Vaccines, therapeutics, a more flexible economy and a better understanding of the risks surrounding COVID have all created an environment that allows the economy to coexist alongside COVID.”

On other topics in the Powell testimony, responding to a question about the amount of time inflation can run high and the Fed would still consider it transitory, Powell said it might be time to stop using that word, since inflation is high enough to meet the goal of 2% average inflation.

The economy and labor market continue improving, but “there’s still ground to cover to reach maximum employment,” Powell said, while “inflation is well above our 2% goal” and the issues causing inflationary pressures will “linger well into next year.”

As for Omicron, it raises uncertainty and downside risks, Powell said.

Consumer confidence declined to a nine-month low as inflation weighed on buyers’ minds, while the Chicago Business Barometer tumble and home prices continued to rise.

Consumer confidence fell to 109.5 in November from 111.6 in October, with the present situation index dropping to 142.5 from 145.5 and the expectations index slipping to 87.6 from 89.0, The Conference Board reported.

“Concerns about rising prices — and, to a lesser degree, the Delta variant — were the primary drivers of the slight decline in confidence,” said Lynn Franco, Senior Director of Economic Indicators at The Conference Board. “Confidence and spending will likely face headwinds from rising prices and a potential resurgence of COVID-19 in the coming months.”

Fewer respondents said they plan to buy a car, home or major appliance in the next half year.

“It is too early for this slip to be attributable to the Omicron variant, though rising COVID case counts in November may well have been a factor,” said Wells Fargo Securities Senior Economist Tim Quinlan and Economic Analyst Sara Cotsakis.

But the decline can be attributed to multiple reasons, they said. “Inflation is as high as it has been in a generation, financial markets remain choppy and the usual stress that comes with the holiday season is complicated by an ever-changing virus and evolving guidance about how to best contain it.”

Separately, the Chicago Business Barometer plunged to 61.8 in November from 68.4 in October, while economists expected it to hold at 68.4

Inventories and production rose while the other indexes fell. Prices paid dipped to a near record 93.8 and employment fell.

Also released Tuesday, home prices rose 19.5% across the nation in the 12 months ended in September, according to the S&P CoreLogic Case-Shiller Indices. In August prices were up 19.8% year-over-year. The 20 city composite grew by 19.1% in the year and the 10-city index grew 17.8%, both lower than August’s gains.

How Long Should You Spend on Analyzing a Stock Chart
Can J.C. Penney survive?
Can Drones Save Ambarella?
Why is Protagonist Therapeutics (PTGX) Soaring 90% Today?
Which Big Tech Stock to Buy on the Dip