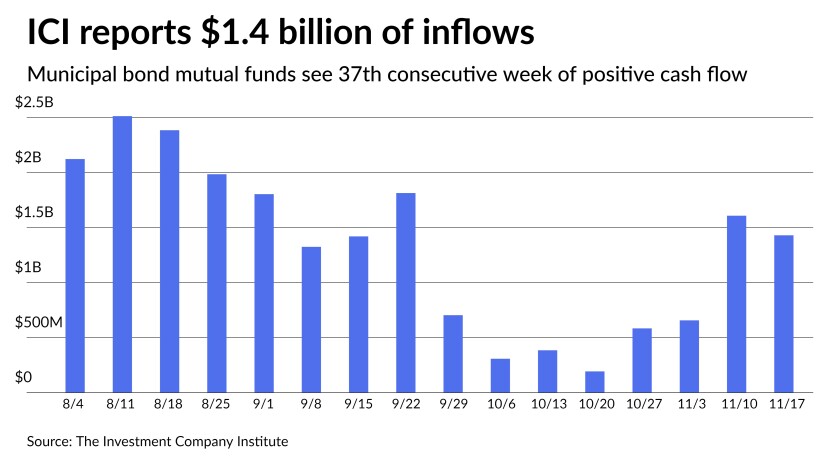 Municipals ended Wednesday where they began the week — unchanged — as traders’ minds were on a meal rather than munis.

While the market reopens on Friday, shops will only have a skeleton staff on duty during the abbreviated post-Thanksgiving trading session with the next real test of benchmark levels taking place on Monday.

IHS Ipreo estimates supply for the upcoming week at $6.5 billion, up sharply from the holiday-shortened week’s slate of under $1 billion. The week’s calendar is composed of $4.5 billion of negotiated deals and $2 billion of competitive sales.

On Wednesday, the Investment Company Institute reported $1.430 billion of inflows into municipal bond mutual funds in the week ending Nov. 17, down from $1.608 billion in the previous week.

It marked the 37th straight week of positive flows into the long-term funds and brought the total inflows for this year past $80 billion.

In an abrupt reversal, exchange-traded funds saw $22 million of outflows in contrast to the $751 million of inflows seen in the prior week.

The average seven-day simple yield for the 150 tax-free and municipal money-market funds remained at 0.01% from the previous week.

Taxable money-fund assets rose $22.83 billion, bringing total net assets to $4.456 trillion in the week ended Nov. 23. The average seven-day simple yield for the 782 taxable reporting funds was unchanged from the prior week at 0.02%.

FOMC minutes
Federal Open Market Committee members expressed increased uncertainty about the path of inflation and whether it would be persistent, and as a result, suggested flexibility.

“Participants stressed that maintaining flexibility to implement appropriate policy adjustments on the basis of risk-management considerations should be a guiding principle in conducting policy in the current highly uncertain environment,” the minutes said.

Some members wanted to taper faster “so that the Committee would be in a better position to make adjustments to the target range for the federal funds rate, particularly in light of inflation pressures.”

Some said the panel “should be prepared to adjust the pace of asset purchases and raise the target range for the federal funds rate sooner than participants currently anticipated if inflation continued to run higher than levels consistent with the Committee’s objectives.”

Indeed, inflation remains an issue. While most of the economic data released Wednesday were positive, the inflation numbers from the personal income and spending report, the Fed’s favorite read, showed price pressures continuing to rise in October.

The core personal consumption expenditures index, the Fed’s preferred inflation indicator, rose 0.4% in the month after a 0.2% gain in September, and for the year, the index was up 4.1%, more than the 3.7% climb pasted in the year ending in September, the highest increase since November 1990.

Economists polled by IFR Markets expected the 0.4% month-over-month gain but expected the year-over-year rise to settle at 4.1%.

The advance GDP read for the third quarter ticked up to 2.1% from the initial 2.0% growth read, as expected, “but remained less than a third of the pace we saw in the second quarter,” Grant Thornton Chief Economist Diane Swonk and Economist Yelena Maleyev noted.

Economists expected 264,000 claims in the week.

“That was most likely impacted by the volatility around the holidays,” said Edward Moya, senior market analyst for the Americas at OANDA. “Optimism is growing that the Fed will have to acknowledge mission accomplished in the labor market a lot sooner than they expected.”

That could, of course, mean faster taper and earlier price hikes.

But Berenberg’s Levy sees it more as a factor of inflation. “November’s CPI print may prompt the Fed to announce an acceleration of the pace of asset purchases at its December or January meeting,” he said.

Consumer sentiment rebounded from decade lows to 67.4 in the final read after 66.8 mid-month and 71.7 in October. Current conditions ended the month at 73.6 and the expectations index was at 63.5.

A taxing problem for year end
Completing municipal bond swaps at the appropriate time for effective portfolio management is extremely important, according to Oppenheimer & Co. Inc.

“Municipal bond tax loss swapping is certainly not a new concept, but it never hurts to remind those investors who have not yet taken advantage of this useful strategy that swaps need to be done by year-end,” Jeffrey Lipton, managing director at Oppenheimer, said in report released Tuesday.

A muni bond swap is done by selling some bonds and reinvesting the proceeds in similar — but not identical — munis. This is done for a variety of reasons, such as reducing tax liability, enhancing returns, adjusting to interest rate changes, credit quality, maturity or duration or call protection, and portfolio diversification.

“We also think that today’s specific market factors, such as the Fed’s move to a gradual tightening sequence that has lifted interest rates and created portfolio losses as well as volatility in the equity markets, make for ample and compelling portfolio opportunity to transact a tax loss swap,” he said.

Lipton noted one of the most often used types of swap transactions is the tax loss swap but cautioned investors should consult with a tax advisor before entering into such a deal.

He said a tax loss swap strategy lets investors partially or fully offset present or future capital gains in other areas of their investment portfolio. The goal is to lower overall tax liability.

“The process begins by identifying a bond that is presently worth less than the purchase price (below adjusted cost basis) perhaps due to higher interest rates or declining credit quality,” he said. “Sell that bond and simultaneously buy a bond having similar, but not identical, characteristics at approximately the same price.”

“However, tax loss swaps can be used to enhance yield and/or reallocate among sectors,” he said. “It is generally recommended that investors consider tax loss swaps before liquidity tightens at year-end as transactional costs tend to be somewhat heavier given liquidity constraints.”

In late trading, Treasuries and equities were mixed.