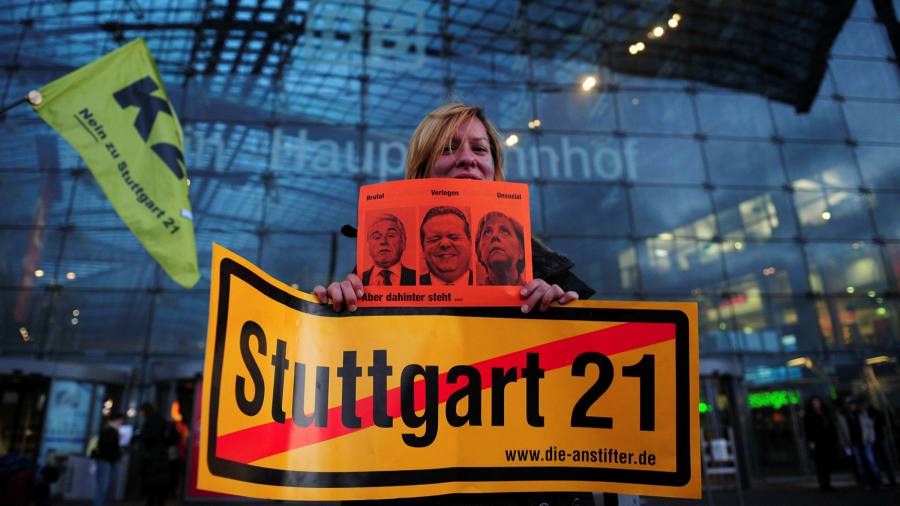 Two Deutsche Bahn employees alleged that some senior staff at the state-owned railway company misused corporate funds as part of widespread fraud at one of Europe’s largest infrastructure projects.

While an investigation into the allegations was under way, one of the employees was fired. Fearing retaliation, the second whistleblower abruptly broke off contact with compliance staff.

The allegations and their aftermath — which a Financial Times investigation uncovered through documents and interviews with people familiar with the case — will add to the controversy over Germany’s most expensive and contentious infrastructure project, a new underground railway station in Stuttgart.

The complex scheme — known as Stuttgart 21 — is funded by the German government, the EU, the state of Baden-Württemberg and the city of Stuttgart. It has been overseen since 2017 by Angela Merkel’s former chief of staff Ronald Pofalla, now a Deutsche Bahn executive.

Stuttgart 21 has become notorious for delays and budget overruns, placing it on an infamous list alongside Berlin’s airport and Hamburg’s Elbe Philharmonic Hall.

The initial €2.5bn price tag has ballooned to €8.2bn. In 2016, Germany’s Bundesrechnungshof, the country’s highest government audit authority, warned costs may rise to €10bn and chided Merkel’s government for “serious shortcomings” in its oversight.

The FT can now reveal that in 2016 Deutsche Bahn’s compliance department received repeated warnings from inside the company that a significant part of the cost inflation was caused by glaring mismanagement and suspected corruption.

One whistleblower estimated that the alleged misconduct resulted in €600m in unnecessary costs to Deutsche Bahn. Both whistleblowers claimed that some senior managers had commissioned superfluous work and suspected they might be receiving kickbacks.

“Group audit needs to act quickly and decisively! Compliance needs to evaluate who is receiving personal gains from this behaviour,” one whistleblower warned in July 2016 in a note seen by the FT.

Deutsche Bahn is a state-owned giant with €40bn in annual revenues that also owns UK-based bus operator Arriva. The unlisted group is persistently under fire in Germany for poor service, frequent delays and cancelled trains. In 2020, it reported a net loss of €5.7bn and €37bn of net debt.

Stuttgart, the capital of Baden-Württemberg, is Germany’s sixth-largest city and home to carmakers Daimler and Porsche. Located in a narrow valley and surrounded by hills, its terminus station has become a bottleneck. Once finished in 2025, the underground through-station, 28 tunnels and 117km of new high-speed tracks will halve the travel time between the cities of Stuttgart and Ulm.

But the project — first proposed in 1994 — has faced fierce protests. Locals have opposed the partial demolition of the listed station building, the logging of trees in a downtown park, high costs and years of construction work. In 2010, police used water cannon against protesters, one of whom was left partially blind.

The two whistleblowers were engineers working on the project. One was a highly experienced team leader and specialist in cost allocation who joined Deutsche Bahn in 1997. The other, who was fired during the probe, joined in 2013.

One example of unnecessary work cited in the complaint was an electrical substation that was not part of the original master plan. One of the engineers was pressured by superiors to award a €2.5m contract for its construction, even though an alternative solution was available for just €30,000. On this occasion, the engineer stood their ground and the expensive option was dropped, according to a person familiar with the matter.

The whistleblowers alleged that some senior executives at Deutsche Bahn ignored their legal obligation to recover costs that other partners were required to cover under German law: for instance, the relocation of an adjacent subway station, whose costs would typically have been shared with the local municipality. The whistleblowers suspected that this behaviour was an attempt to prevent partners from detecting unnecessary spending.

The employees first flagged their concerns internally. When senior executives dismissed them despite what both regarded as proof of unnecessary tenders and violations of cost allocation laws, they started to suspect that managers might be deliberately ignoring misconduct.

Two decades ago, a fraud scheme linked to the renovation of Leipzig’s station was uncovered after a company that was asked for a bribe reported the demand to Deutsche Bahn. A corrupt manager, who was internally dubbed “Mr Three Percent” as he insisted on a kickback of 3 per cent of invoices, was later jailed.

Deutsche Bahn said that an internal investigation into the Stuttgart whistleblowers’ complaint was launched in early 2016 and closed after more than a year without finding anything untoward.

“All alleged irregularities were investigated by the unit for internal investigations and evaluated by group security and did not prove to be true,” the company said. It declined to disclose details about the probe’s scope and methods, saying only that it was conducted “in line with internal and legal standards”.

The cost allocation specialist summarised their concerns in a four-page note dated July 11 2016 — the date of a joint meeting between the two whistleblowers and compliance staff in Stuttgart. The memo stated that “illegal and improper conduct” including “illicit financing commitments, opaque arrangements [and] organisational chaos” meant the company “has been unnecessarily deprived of €600m”.

According to people familiar with the matter, this estimate was the result of a detailed calculation by the cost allocation expert, based on an internal master list of all the construction work affecting other public entities, and the payments that Deutsche Bahn could legally claim from them but did not.

The whistleblower’s memo also stated that its author felt repeatedly bullied and was shouted at by superiors who demanded that improper decisions were approved retrospectively.

It is unclear how widely this memo was distributed within Deutsche Bahn. Three people familiar with the matter confirmed its authenticity, two of them adding that compliance staff were walked through the arguments in detail by its author.

The company told the FT that it did not possess such a document but declined to answer if it was aware of the whistleblower’s €600m estimate. The note’s author took “a rather passive role” in the July meeting, the company said, adding that this person “had not reached out to compliance before July 2016”.

Other people familiar with the case told the FT that both whistleblowers had frequently been in touch with compliance since December 2015, and before July had scheduled two joint meetings with compliance and internal investigators, which for various reasons did not happen as planned. Deutsche Bahn told the FT it found this depiction of events “incomprehensible”, adding that “we reject it out of hand”.

Weeks after an initial meeting with compliance in January 2016, one of the whistleblowers received a series of written warnings for alleged minor misconduct such as the late filing of sick notes. In December 2016 the whistleblower was fired.

The employee successfully sued for wrongful dismissal in 2017. After returning to work one year later, the person was again fired over different alleged misconduct. In the following multi-year legal tussle, judges repeatedly ruled that the second sacking was also unlawful. However, a Stuttgart judge upheld Deutsche Bahn’s request to dissolve the contract, arguing that mutual trust had been destroyed.

Deutsche Bahn said its actions towards the employee were totally unrelated to the whistleblower complaint, arguing that they referred to employment-related misconduct. A Stuttgart court in July upheld this view.

Deutsche Bahn confirmed that the second whistleblower broke off contact with compliance after the July meeting. People familiar with the matter said that the whistleblower feared retaliation and believed there was no appetite to investigate the allegations thoroughly. Deutsche Bahn declined to comment on the reasons for the whistleblower’s change of heart but pointed out that this person was still an employee.

The company told the FT that “the protection of whistleblowers who act in good faith is of high importance”, adding that its compliance management system was “state of the art, fully effective and matches the highest expectations”.

By contrast, both employees suspected that their identities were disclosed to the project’s senior management early on against their will, documents show. Deutsche Bahn firmly denied that it exposed the whistleblowers internally.

The two whistleblowers, whose identities are known to the FT, declined to comment.

How Long Should You Spend on Analyzing a Stock Chart
Which Big Tech Stock to Buy on the Dip
How To Trade False Breakouts: Beginner Guide
Can J.C. Penney survive?
Why is Protagonist Therapeutics (PTGX) Soaring 90% Today?