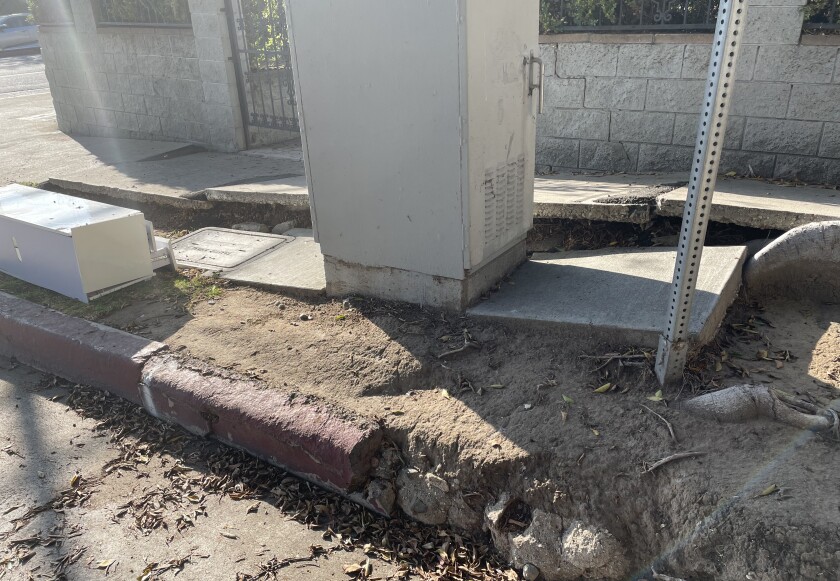 A legal settlement finalized in 2016 requires the city to spend $1.37 billion over 30 years to address broken sidewalks, inaccessible curb ramps and other access barriers in the pedestrian public right of way.

“The sidewalks are not getting repaired quickly, nor efficiently enough,” Galperin said. “If we continue at the current pace, it will take more than 500 years to repair the city’s sidewalks.”

Over the past five fiscal years, the city received more than 1,700 claims and 1,020 lawsuits for sidewalk injuries paying out more than $35 million in settlements, including $12 million in fiscal year 2020, according to Galperin’s audit.

“It’s safe to say that much like our sidewalks, the program needs to be repaired, because it’s broken,” Galperin said during a press conference at City Hall.

The city primarily administers sidewalk repairs through its compliance with the Willits settlement, an agreement that ended a class action lawsuit initiative by disability rights advocates alleging poor sidewalk conditions across Los Angeles, according to the audit.

The City Council adopted a “fix and release” policy the year it reached the settlement with the stated goal of repairing all the sidewalks in Los Angeles, making the city officially responsible for initial required sidewalk repairs.

Under the policy, the city completes repair work and then issues a sidewalk certificate of compliance, along with a limited warranty to the adjacent property owner for the repair. After that, the city can begin to enforce the property owner’s duty to maintain the sidewalk on their private property.

The fix-and-release policy does not alter the city’s liability for sidewalk injuries under state law, “underscoring the importance of having a more balanced, ongoing sidewalk repair and maintenance program in Los Angeles,” Galperin wrote in a letter to Mayor Eric Garcetti, City Attorney Michael Feuer and the City Council that was attached to the audit.

Galperin also emphasized in his letter that less than 1% of the city’s sidewalks have been certified since the program was implemented.

The Public Works Department’s Bureau of Engineering leads the city’s sidewalk repair efforts, including its compliance with the Willits settlement. While the department is actively repairing and rebuilding sidewalks, “the scale of the problem, combined with the city’s inefficient strategy, means hazardous sidewalks are not getting repaired fast enough,” Galperin wrote.

The city has not issued judgment obligation bonds for sidewalk repairs, according to Ha To, the city’s debt manager.

Though the city contemplated issuing a $60 million judgment bond in 2017 to cover millions in legal settlements for sidewalks and other issues, it ultimately decided not to.

The city controller wrote a letter to the mayor at the time arguing against issuing debt and saying that “debt financing of liability claims should only be used in extraordinary circumstances in times of great need.”

Galperin urged city leaders to make major changes to the sidewalk repair program by responding to repair requests quicker, prioritizing fixes in residential neighborhoods and completing a citywide assessment to understand the true scope of the city’s sidewalk problems.

Miguel Santana, the city administrative officer at the time the settlement was reached, had recommended in a report that the city establish a program to survey the sidewalks in order to prioritize repairs.

“We have never done an assessment of the city’s 9000 miles of sidewalks,” Galperin said.

“Other cities like Seattle have done that. There are ways to do it more quickly than boots on the ground using AI technology or cameras,” he said.

“I am not suggesting we scrap the city’s repair project, but I am suggesting we overhaul it,” Galperin said. “There is money coming from the federal government. Let’s make sure we get our fair share of it.”

City Councilman Bob Blumenfeld, D-Woodland Hills, who joined Galperin at the press conference, pledged to work with the relevant departments to tackle the issues raised in the report.

“The issue with the sidewalks is decades in the making,” Blumenfeld said. “It’s not something new, but it’s fundamental that we do something to improve our sidewalks. We need to position ourselves to take down as much federal money as possible.”