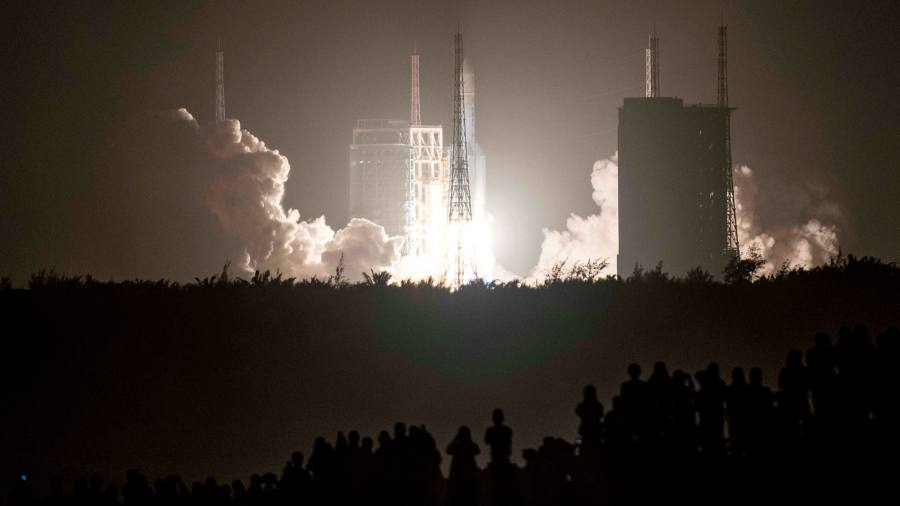 China’s hypersonic weapon test in July included a technological advance that enabled it to fire a missile as it approached its target travelling at least five times the speed of sound — a capability no country has previously demonstrated.

Pentagon scientists were caught off guard by the advance, which allowed the hypersonic glide vehicle, a manoeuvrable spacecraft that can carry a nuclear warhead, to fire a separate missile mid-flight over the South China Sea, according to people familiar with the intelligence.

Experts at Darpa, the Pentagon’s advanced research agency, remain unsure how China overcame the constraints of physics by firing countermeasures from a vehicle travelling at hypersonic speeds, said the people familiar with details of the demonstration.

Military experts have been poring over data related to the test to understand how China mastered the technology. They are also debating the purpose of the projectile, which was fired by the hypersonic vehicle with no obvious target of its own, before plunging into the water.

Some Pentagon experts believe the projectile was an air-to-air missile. Others think it was a countermeasure to destroy missile defence systems so that they could not shoot down the hypersonic weapon during wartime.

Russia and the US have also pursued hypersonic weapons for years, but experts say the firing of countermeasures is the latest evidence that China’s efforts are significantly more advanced than either the Kremlin or the Pentagon.

The White House declined to comment on the countermeasure, but said it remained concerned about the July 27 test, which was first reported by the Financial Times last month.

“This development is concerning to us as it should be to all who seek peace and stability in the region and beyond,” said a spokesperson for the National Security Council. “This also builds on our concern about many military capabilities that the People’s Republic of China continues to pursue.”

The NSC added that the US would “continue to maintain the capabilities to defend and deter against a range of threats” from China.

Pentagon officials have been increasingly public with their concerns about the July test. The hypersonic glide vehicle was propelled into space on an “orbital bombardment system” rocket that can fly over the South Pole, putting the weapon out of reach of US missile defence systems, which are focused on ballistic missile threats coming over the North Pole.

US officials are well aware that China is ahead of the Pentagon in hypersonic weapons. But the July 27 test showed that the People’s Liberation Army Rocket Force was making even faster progress than many had projected. That has been reinforced by Beijing successfully combining an orbital system with a hypersonic weapon that can shoot a missile.

The hypersonic test comes as China rapidly expands its nuclear forces, in a way that suggests it is abandoning the “minimum deterrence” posture it has maintained for decades. The US recently said it would quadruple its nuclear warheads at least 1,000 weapons this decade.

The Chinese embassy said it was “not aware” of the missile test.

“We are not at all interested in having an arms race with other countries,” said Liu Pengyu, the embassy spokesperson. “The US has in recent years been fabricating excuses like ‘the China threat’ to justify its arms expansion and development of hypersonic weapons.”

General David Thompson, vice-chief of space operations at the US Space Force, said the US was “not as advanced” as China or Russia in hypersonic weapons.

“We have catching up to do very quickly. The Chinese have had an incredibly aggressive hypersonic programme for several years,” Thompson told the Halifax International Security Forum on Saturday.

General Mark Milley, chair of the US joint chiefs of staff, recently called the weapons test close to a “Sputnik moment”, a reference to the Soviet Union becoming the first to put a satellite in space in 1957.

Lloyd Austin, defence secretary, this week said he would not use the same language. But earlier this week as he prepared to retire as vice-chair of the joint chiefs, General John Hyten voiced significant concern.

Can Drones Save Ambarella?
Why is Protagonist Therapeutics (PTGX) Soaring 90% Today?
Can J.C. Penney survive?
How Long Should You Spend on Analyzing a Stock Chart
How To Trade False Breakouts: Beginner Guide