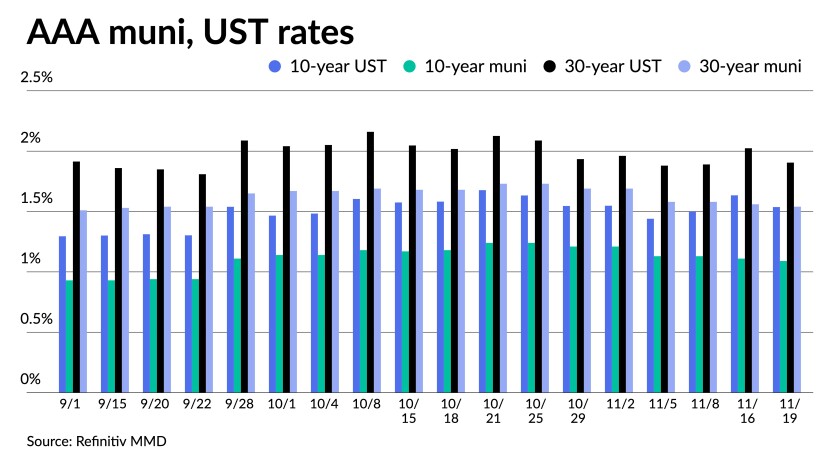 Municipals were stronger Friday on the back of the U.S. Treasury rally amid concerns of rising COVID-19 outbreaks in Europe.

Triple-A benchmarks were bumped by one to three basis points beginning around the five-year mark with the larger moves out longer, but the asset class underperformed the five- to six-basis point moves in UST.

Municipal primary volume for the Thanksgiving week is estimated at $496.8 million, down from total sales of $10.994 billion priced this week.

There are $402.9 million of municipal bond sales scheduled for negotiated sale and $93.9 million on the competitive calendar.

The market is likely to see an influx of taxable refundings in the last few weeks of the year as issuers who have been sidelined awaiting tax-exempt advance refundings are likely to jump into the market to refund debt now that it is nearly impossible the reinstatement of tax-exempt refundings will make it into the Build Back Better plan. Already issuers are lining up various taxable refunding deals posted on MuniOS for December.

The story lately has been how muni technicals have outweighed UST volatility.

“Tax-exempts have continued outperforming, which is hardly a surprise in late Q4,” said Barclays strategists in a weekly report. “Muni market technicals are supportive: fund flows are well over $1 billion on a weekly basis; supply likely has just a couple of active weeks left this year the 30-day visible pipeline is rather subdued, especially for tax-exempts; investors will get more than $30 billion in redemptions in January; it seems that on the policy front muni investors should not expect too many negative surprises; and, finally, in December dealers might become more aggressive getting set up for next year.”

“Tax-exempts are far from being cheap at current levels, but they might have still some room to marginally improve, in our view,” Barclays strategists Mikhail Foux, Clare Pickering and Mayur Patel said in the report.

On the policy front, Treasury Secretary Janet Yellen told congress that the government will run out of money on Dec. 15, and two days after that Senate Majority Leader Chuck Schumer and Minority Leader Mitch McConnell met to discuss the need to boost the nation’s debt ceiling in an orderly manner, they said in the report.

Moody’s said it is planning to keep the U.S. credit rating under review until the debt ceiling situation is resolved, they noted, adding that the ratings agency’s stable outlook for the U.S. Aaa rating reflects a view that the debt limit will ultimately be raised or suspended with all interest payments made on time and in full.

Turning the municipal credit, Barclays said the current municipal credit backdrop is “quite strong, as most sectors continue to develop healthy fundamental cushions that have resulted in elevated credit ratings and outlooks, evidenced by the strongest upgrade/downgrade trend in almost 15 years.”

“In general, we expect continued budget outperformance in 2022 albeit at a slower pace,” they said. “Unsubsidized operating results will begin to emerge, potentially obscuring the stimulus effect in our view, leaving issuers to manage structural deficiencies and nascent exogenous factors.”

Treasuries rallied with bigger moves out longer and equities were mixed.