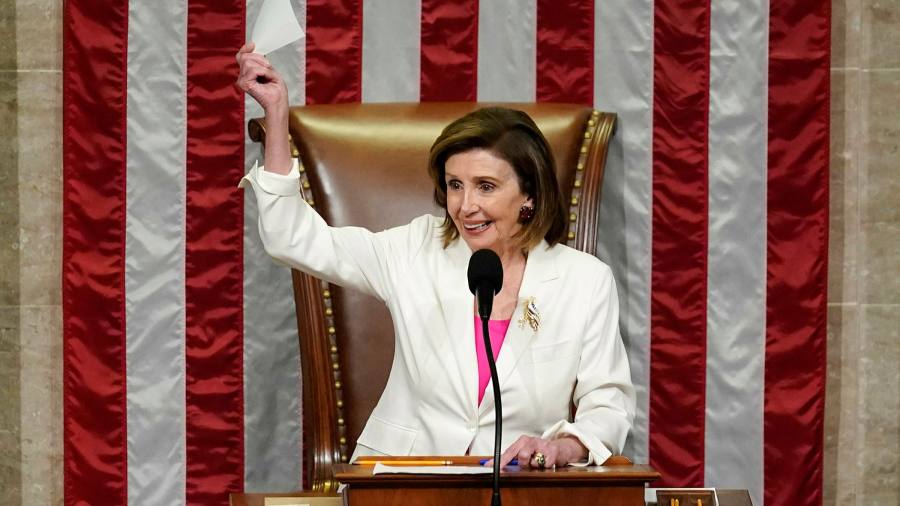 The US House of Representatives passed the $1.75tn Build Back Better bill on Friday morning, sending Joe Biden’s ambitious social spending package to the Senate, where it faces an uncertain fate.

The final vote was 220-213, with all but one Democrat voting in favour and every Republican opposing it.

The Democrat-controlled House had aimed to pass the bill — which would make sweeping investments in early childhood education, public healthcare for senior citizens and measures intended to combat climate change — on Thursday evening.

But Kevin McCarthy, the House’s top Republican, invoked his privilege as House minority leader and launched into an hours-long speech that held up the vote. The entire Republican caucus had been expected to vote against the social spending bill, arguing the legislation would compound inflation at a time when more Americans are concerned about rising consumer prices.

McCarthy ultimately ended his record-breaking speech shortly after 5am on Friday. Three hours later, the lower chamber of Congress reconvened to approve the bill, largely along party lines.

The vote on Build Back Better comes one week after the House passed Biden’s $1.2tn bipartisan infrastructure plan, with support from 13 House Republicans. Biden signed the bill into law on Monday.

The White House had aimed to move the infrastructure bill and the social spending bill through Congress at the same time. But the Build Back Better legislation was held up for months amid Democratic party infighting that exposed fissures between progressives and moderates.

A handful of moderates withheld their support until the independent, non-partisan Congressional Budget Office produced an analysis of the costs of the package.

The CBO’s estimates, released on Thursday afternoon, said Build Back Better would “result in a net increase in the deficit totalling $367bn over the 2022-31 period”. The CBO projected that separate White House proposals to beef up tax enforcement by the Internal Revenue Service would reduce the deficit by $127bn over the same period.

The White House, nevertheless, insisted the bill was “more than fully paid for”, producing its own more aggressive projections suggesting that it would actually reduce the deficit by $112.5bn.

The projections appeared to assuage the concerns of House moderates, including Josh Gottheimer of New Jersey and Stephanie Murphy of Florida, who said they would vote for the bill. Jared Golden of Maine was the only Democrat to vote against the bill, in protest of its tax cut provisions for wealthy Americans. The House version of Build Back Better reverses a Trump-era tax change that resulted in higher income taxes for homeowners in high-tax states such as New York, New Jersey and California.

The Build Back Better bill now goes to the Senate, where lawmakers are expected to continue wrangling over the details of the package in an effort to secure the support of all 50 Senate Democrats, including Joe Manchin of West Virginia and Kyrsten Sinema of Arizona. Chuck Schumer, the Senate’s top Democrat, has targeted a final vote on the bill in the upper chamber of Congress before Christmas.

Can J.C. Penney survive?
How Long Should You Spend on Analyzing a Stock Chart
How To Trade False Breakouts: Beginner Guide
Why is Protagonist Therapeutics (PTGX) Soaring 90% Today?
Which Big Tech Stock to Buy on the Dip