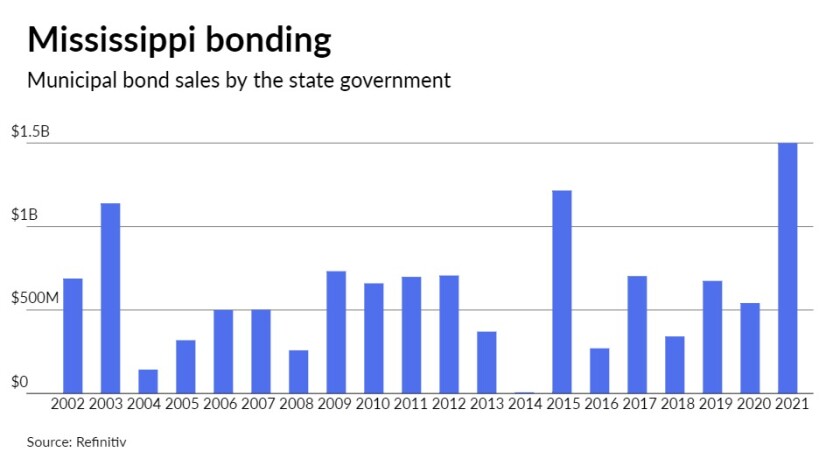 Mississippi’s $1.2 billion general obligation bond commands the stage this week, but a much smaller deal that came to market last month from Vicksburg highlights an innovative way the Magnolia State’s cities and counties are meeting their infrastructure needs.

Raymond James is the co-manager with HilltopSecurities as municipal advisor and Butler Snow serving as bond counsel.

Proceeds from the Series 2021C bonds will finance various capital improvements in areas such as higher education and provide funding to state agencies and county courthouses and school buildings, roadways and other infrastructure projects.

Fitch said its rating incorporates “the state’s strong control over spending and revenues and generally conservative financial practices, providing significant financial resilience. Fitch anticipates liability levels will be moderate, albeit above average for a U.S. state, while economic growth is likely to be below average.”

Moody’s added that the stable outlook “reflects an expectation of continued conservative fiscal management, which will enable the state to weather economic uncertainties related to the pandemic. The rating also incorporates an expectation of stable revenue and economic trends.”

At the local level
On a much smaller scale, recent state legislation has been helping to buttress funding for local communities’ infrastructure needs.

Passed by the legislature in 2018, the “Mississippi Infrastructure Modernization Act,” allows a share of use tax revenue — the tax on sales from out of state, such as Amazon purchases — to be diverted to cities and counties for repair, maintenance, and reconstruction of roads, bridges and water and sewer infrastructure. These revenues can then be used to back or provide a revenue stream for bond issues for infrastructure upgrades.

Under a 2019 opinion from the state attorney general, municipalities and counties may use funds to repay principal amounts on a bond sale where the proceeds were used for infrastructure purposes. Paying debt service on these type bonds was also seen as a viable use of funds.

On Oct. 18, the city of Vicksburg, population 22,000, sold $11 million of GOs in a competitive sale. These bonds were general obligations of the city and used a revenue stream from taxes on online sales to back up debt service payments. The sale was done quickly on a limited basis and the issuer didn’t ask for a rating on these bonds. In a February report, Moody’s said that Vicksburg had a sound credit position, with an A2 GO rating.

It was the latest of several municipal bond deals by Mississippi cities and counties that have used a revenue stream from residents’ online spending based on the three-year-old law.

Vicksburg Mayor George Flaggs and the Board of Alderman approved a resolution approving the sale of the GOs to Regions Capital Advantage with a net interest cost of 1.60%, according to bond counsel Tray Hairston of Butler Snow. Trustmark Bank was the other bidder on the bonds, which came in with a bid of 1.875804%.

Before this latest sale, the last time the city was in the market was in 2018 when it issued bonds through the Mississippi Development Bank.

Vicksburg gets internet sales tax disbursements from the state twice a year and the mayor and aldermen felt it was a better use of the money to issue a larger amount of bonds to take on capital improvements all at once rather than to go and use smaller amounts each year in a pay-go piecemeal fashion.

Proceeds will go toward upgrades of water and sewer systems and road and bridge improvements, which are consistent with the legislation.

“Thanks to Tray Hairston and Butler Snow who made us aware of this opportunity,” Flaggs told The Bond Buyer. “Money won’t be any cheaper than it is now, so it’s a great savings to us.

While online sales tax revenues are not directly pledged to back such bonds, Hairston told The Bond Buyer, the deals are sized and structured so that the use tax revenues cover debt service, while the credit is still the general obligation of the cities and counties.

Former Gov. Phil Bryant shepherded the infrastructure bill through the legislative process in 2018.

“We believed it was time to move and we called a special session to do that in August 2018 when we called the Legislature back to Jackson and said, ‘Let’s pass some funding for infrastructure,’” Bryant told The Bond Buyer. “And we had a couple of different opportunities to do that — to include a state lottery and a use tax — there was no real use tax in Mississippi and of course we all know how much is now being purchased online so while some guys going into the locals shops had to pay the sales tax, you could buy online for nothing, so we put the use tax in place. And there was some additional monies in gaming counties that we redirected for the modernization of infrastructure.

“It went well. We passed the state lottery, sports betting and redirecting gaming sinking funds all in about two days. So it was a very historic special session,” he said.

He noted that some had wanted to raise fuel taxes, but that Mississippi’s elected officials didn’t want to do that.

“And looking back, that was the right decision,” he said, “With gasoline at $3 a gallon now and if you added another 10 to 15 cent per gallon on a state fuel tax you would make things even worse than they currently are.”

He said the law has pulled in hundreds of millions of dollars and now — with help from the attorney general’s opinion — lets cities like Vicksburg take advantage of low interest rates and use this funding stream to issue bonds for infrastructure.

“I think this is what municipalities and governments have to do for the benefit of the taxpayers — they have to find ways of using creative financing and implement them so they can get the best for their dollar. It is incumbent upon us to save the taxpayers money at any opportunity we get,” Flaggs said.

In July, Flaggs was elected to a third term as Vickburg’s mayor. Previously, he was in the state House of Representatives from 1988 until 2013. In 2019, he was the only elected official to be named one of the state’s “Most Influential African Americans.”

Hairston’s legal practice focuses on public finance, economic development and government relations. He has served as bond counsel for various cities and counties throughout the state. Before joining Butler Snow, he was counsel and economic development advisor to Gov. Bryant. In 2018, he was recognized in 2018 as one of The Bond Buyer’s Rising Stars.