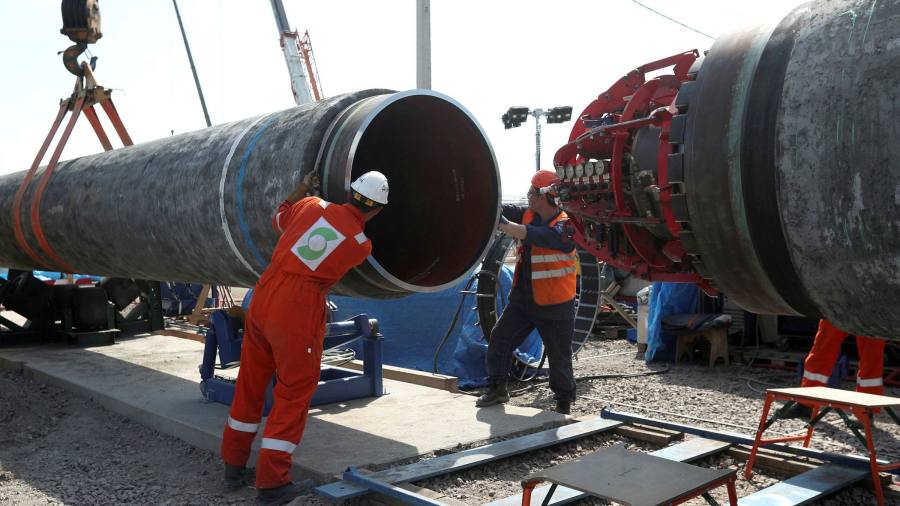 Germany’s energy regulator said it had “temporarily suspended” certification of the Nord Stream 2 pipeline, dealing a setback to the Kremlin-backed gas project and sparking a rise in UK and continental European gas prices.

The regulator said it could not yet approve the project, led by Russia’s Gazprom, because its owners had not yet properly set up an operating subsidiary according to German law.

The suspension comes at a critical time for European gas supply, with prices surging across the continent. Gazprom has been accused by some countries of restricting exports to western Europe in order to increase pressure on Germany and accelerate the approval of the project.

UK gas contracts for delivery in December rose almost 10 per cent to £2.24 a therm on the news while the European benchmark gained 8 per cent to €87.80 per megawatt hour, with both contracts trading near their highest level for the past month.

The Swiss-based Nord Stream 2 project created a German subsidiary to own and operate the German section of the pipeline. That unit “must then meet the requirements of the Energy Industry Act for an independent transport network operator”, the regulator said on Tuesday.

“The certification process remains suspended,” the regulator said. It said Nord Stream 2 would be able to continue certification within the four-month period set by the law.

Nord Stream 2 would send 55bn cubic metres of gas per year under the Baltic Sea, allowing Kremlin-controlled gas exporter Gazprom to reach customers in Germany and elsewhere in Europe without using pipelines running through Ukraine.

Gas traders have been looking for signs that Russia will increase exports to western Europe but have seen only piecemeal increases in recent weeks, with flows well below the level of a year ago.

Russian president Vladimir Putin has consistently linked higher exports to the approval of the Nord Stream 2 pipeline. Any delay is likely to increase fears that Russian flows will remain at relatively low levels this winter.

“Any remaining hopes that this pipeline would be available for the winter are completely dashed now,” said James Waddell at Energy Aspects, a consultancy. “Increasingly it’s looking like it may not start up until the second half of next year.”

“The lack of gas in storage and the lack of Russian supplies mean we essentially have to cut into industrial demand in order to preserve crucial gas supplies for the power and heat networks. Europe is having to heavily reduce industrial gas demand in a way we haven’t seen in decades.”

Waddell said Russia could boost supplies to western Europe through the Ukrainian pipeline system that Russia has relied on since Soviet times, but he said this was unlikely given Moscow’s insistence that Nord Stream 2 is the key to boosting exports.

Ukrainian officials have warned they believe Russia is in effect blackmailing Europe by restricting gas supplies, and that reducing its reliance on Ukraine could make it easier for Moscow to launch an invasion.

UK prime minister Boris Johnson warned on Monday that the EU faces “a choice” between “sticking up for Ukraine” and approving the Nord Stream 2 gas pipeline.

Can J.C. Penney survive?
Can Drones Save Ambarella?
Which Big Tech Stock to Buy on the Dip
How Long Should You Spend on Analyzing a Stock Chart
How To Trade False Breakouts: Beginner Guide