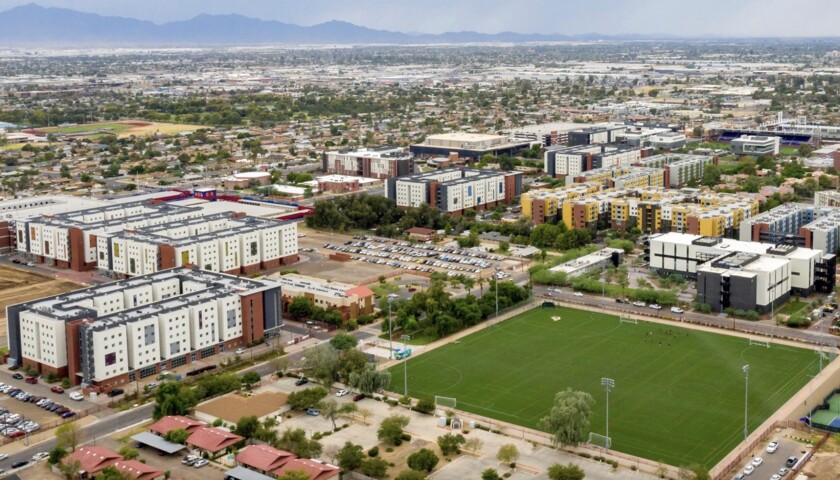 Three years after reclaiming its non-profit status in an arrangement that still leaves it tied to its former for-profit owners, Grand Canyon University in Arizona comes to market this week with $1.2 billion of taxable bonds.

With final maturity in 2029, the bonds are considered a general obligation of the university and carry a rating of Ba1 from Moody’s Investors Service, one notch below investment grade. The outlook is stable.

“The assignment of the Ba1 issuer rating acknowledges the substantial scale and record of enrollment growth at Grand Canyon University,” Moody’s analyst Dennis Gephardt said in a Nov. 8 report. “Enrollment growth in online and on campus segments will provide the university with the ability to invest in new programs, facilities and service its debt.”

Known widely today for its online courses, Grand Canyon began in 1949 as a Southern Baptist Convention-affiliated college in Prescott, Arizona, 120 miles south of the namesake canyon. Two years later the campus moved further south to Phoenix, where it remains.

After financial difficulty, GCU’s trustees authorized a sale in January 2004 to California-based Significant Education, LLC, making it the first for-profit Christian college in the nation. Significant Education changed to a corporation in 2005 and became publicly traded under the name Grand Canyon Education, Inc. in 2008.

Nondenominational since 2000, GCU invested heavily in a campus in Phoenix during its decade as a for-profit business. By 2018, it ranked as the largest Christian university in the world.

“We actually put $1.6 billion into this campus in the last eight or nine years,” GCU President Brian Mueller said in an online “roadshow” presentation for the bond sale. “When we first came here, the campus was like 900 students, and that has now grown to almost 24,000 students. We’re going to put another $500 million into this campus in the next four to five years. We’re going to grow to more than 40,000 students.”

Development of the Phoenix campus ran headlong into the COVID-19 pandemic in 2020. Despite the ongoing threat from the disease, GCU added 9,000 students in this fall’s semester, bringing enrollment to 23,500, Mueller said.

“We came here with the idea that we could come up with a new economic model that would make private, Christian education affordable to all socio-economic classes of Americans,” Mueller said. “We built the world’s largest platform to deliver online education to working adult students.”

In 2011, GCU and its for-profit board turned toward the traditional higher-education market, which consisted of 18-year-old high school graduates.

“We thought that if we created a hybrid campus and we had a large student body in both markets, we would flip the economics of higher ed, create efficiencies so that we could make it affordable to all socio-economic classes of Americans,” Mueller said.

Mueller said that the average GCU student pays $8,600 for tuition after scholarships, and $7,000 for room and board.

“The average GCU student takes out less debt than the average state university student,” he said.

Mueller sought to reassure investors that the former corporate parent, Grand Canyon Education, will function only as a service company and that the university would be autonomous. Proceeds of this bond sale will pay off the note held by GCE.

“One of the things that’s very important to know about the transaction and GCU’s conversion to a nonprofit entity is that the university has its own board, and it’s a completely independent board,” Mueller said. “Who the university is going to be in the future is totally the responsibility of the university’s management team and the university’s board.”

A 15-year agreement signed in 2018 gives Grand Canyon Education 60% of the university’s revenue in return for support services, according to the offering document for the bond sale. It allows the nonprofit to terminate the deal starting in 2025 for a lump-sum termination fee of 100% of fees paid in the previous year or after 2033 for a 50% non-renewal fee.

“We expect the revenue derived from our Master Services Agreement with GCU to account for a large percentage of our revenue for the foreseeable future,” the for-profit firm wrote in its most recent 10-K annual report filing.

“Governance considerations, including the unique structure and leadership relationship between GCU and GCE, are a key driver of the rating action,” Gephardt said.

While the Internal Revenue Service recognizes GCU as a private, nonprofit corporation, the U.S. Department of Education treats the university as for-profit based on its 2019 review of the conversion, Gephardt said.

The Department of Education cites the Master Services Agreement as the primary reason for not recognizing GCU as a nonprofit, the university says in the preliminary offering memorandum for the deal.

The continued for-profit designation has no material impact on operations or the university’s appeal to students, the offering document says.

GCU sued the DoE in February seeking recognition of its for-profit status.

Undergraduate college enrollment fell 6.5% this year compared to fall 2019, the largest two-year decline in half a century, according to an Oct. 26 report from the National Student Clearinghouse Research Center.

The smallest drop over the past year was among private, nonprofit, four-year colleges at 0.7%. Over the past two years, the decline was 1.2%.

In Arizona, universities are facing new competition from community colleges, which have been authorized to offer four-year degrees.

Maricopa Community Colleges, which operates 10 colleges in the Phoenix area, plans to launch its first baccalaureate degrees in fall 2023.

Senate Bill 1453, which was passed in the Arizona Legislature this year, requires community colleges to demonstrate workforce needs in the region and student demand before they can offer the four-year degrees.

Maricopa Community Colleges is targeting students who may need a degree to further their careers in fields such as technology and public safety.

The law also says the community college degree programs should avoid unnecessarily duplicating those at other higher education institutions in Arizona.

GCU’s nonprofit status — if it wins such recognition from the Department of Education — could prove beneficial if Democrats in Congress succeed in increasing Pell grants for that sector while withholding an increase to for-profit colleges.

The Biden Administration is also considering a number of reforms after the collapse of for-profit universities that left students with millions of dollars in debt and no degrees.

In 2019, The University of Phoenix, one of the nation’s largest for-profit college chains, agreed to a $191 million settlement with the Federal Trade Commission, which said the school had recruited students with fraudulent claims about partnerships with major companies.

The University of Phoenix admitted no wrongdoing in the settlement.