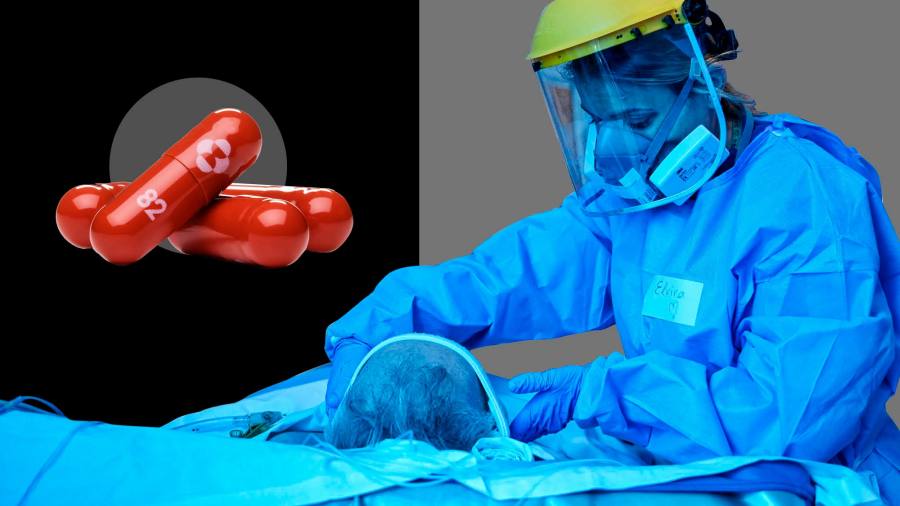 In early March 2020, Pfizer’s chief scientific officer was summoned to the White House to discuss the disease that was sweeping across the world.

Mikael Dolsten did not talk about the vaccine that would later bring the company fame and enormous wealth: instead, in those early days, he described how the drugmaker was working on a way to treat patients who had developed Covid-19.

“We have identified compounds — medicines — that we think . . . have good, high probability to be active against Covid-19,” he told President Donald Trump.

High-risk patients will soon have two new drugs that could transform their care without them even leaving home. Late stage trials have shown the Pfizer pill, called Paxlovid, cuts the risk of hospitalisation and death by almost 90 per cent and a drug developed by Merck/MSD and Ridgeback Biotherapeutics cut the risk of hospitalisation in half. Merck’s drug, called molnupiravir, has received its first approval, in the UK.

The oral antivirals will be an important tool for ailing healthcare systems eager to reduce the burden of a potential influx of Covid-19 patients this winter. Doctors have so far had to rely on the expensive and hard-to-administer antiviral remdesivir plus antibody treatments, or drugs such as steroids that quell the immune system’s overreaction later in the disease.

Daria Hazuda, ​​Merck’s vice-president of infectious disease and vaccines, believes “keeping people out of hospital is huge . . . Especially when you see surges and surges that seem to occur unpredictably, and hospitals and healthcare workers [who] are just being completely overwhelmed,” she says.

Investors also hope the antiviral could speed the recovery of the whole economy. Pfizer’s phase 3 results lifted shares in companies that have been hit hard by the pandemic, such as cruise operators and airlines.

Yet the drugs are not a panacea. Importantly, the data from the trials was only for the unvaccinated, when the majority in many countries will face lower risks because they have had the shot. With supply still limited initially, there are questions about who should be prioritised, and renewed concerns that developing countries will miss out. Some scientists are also worried about side effects for patients or whether the drugs will encourage the virus to mutate further.

Even healthcare providers excited to embrace the pills face practical problems in getting them to patients quickly enough. Carri Chan, a professor of healthcare and pharmaceutical management at Columbia Business School, says the pills are “very promising”, comparing them to taking Tamiflu after the initial symptoms of influenza.

“You can imagine, in the long run . . . someone experiences symptoms, they go to their primary care provider or urgent care and get a test. In 30 minutes they have a result and if they need a prescription, they can get that and go home,” she says. “But I think we have to acknowledge we are still a ways away from that.”

Creating an antiviral is notoriously tricky. Researchers have to try to find a way to defeat the virus that doesn’t also damage the patient. Even then, the virus can mutate to escape the drug’s grasp, so antivirals are often taken in combination. Kin-Chow Chang, a professor at Nottingham university who studies antivirals for respiratory viruses, says creating the drugs is “more challenging” than developing vaccines.

“It is preventing a fire versus trying to stop a raging fire,” he says.

So far, Gilead’s remdesivir, repurposed from a drug candidate for treating Ebola, has been the main antiviral used for Covid-19. But it is an intravenous infusion, hard to deliver at home or before people are hospitalised and there have been concerns about its efficacy.

Merck’s antiviral molnupiravir is in the same class of drug. It disrupts the virus’s ability to replicate by causing an explosion of errors in the virus, which prevent the virus from functioning and spreading when these reach a certain level.

In contrast, Pfizer’s drug is a pill that blocks an enzyme the virus needs to replicate.

For some scientists, the Merck drug’s mutation strategy could cause worrying side effects. Ronald Swanstrom, professor at University of North Carolina School of Medicine, did animal studies that showed the drug could accelerate the mutation of DNA inside cells and says there is at least a theoretical possibility that molnupiravir could negatively impact a person’s health.

“I think use of this drug should be restricted to people who would benefit the most, those who are symptomatic and have risk factors. It should never be used to treat a pregnant woman, and we should follow the first wave of treated people long term to see if there are any unwanted side effects,” says Swanstrom.

But Merck’s Hazuda dismisses the studies as a “pretty drastic experiment” that bears no relationship to the small doses given to humans over a short period of time. Merck has conducted very extensive safety workshops to understand the potential risks, she said.

Even if there aren’t risks to individual patients, we could all suffer if the mutations generated by the drug become more dangerous variants, warns virologist William Haseltine.

“This drug creates mutations in the virus but if you don’t kill the virus then some could get out,” the former Harvard professor said.

But Hazuda said the risk of creating new variants was overstated because the virus already did a perfectly good job of generating mutations when allowed to run wild.

One of the potential problems is that antivirals work better the earlier they are given to patients. In the Pfizer trials, patients took their first pills within five days of developing symptoms. But it remains unclear how quickly efficacy drops off in that period. Many scientists suspect the first 48 hours will be crucial.

Healthcare providers may struggle to rush the drugs to patients. Céline Gounder, an epidemiologist who served on the Biden administration’s Covid-19 transition team advisory panel, says the US health system is not set up for rapid diagnosis and rapid treatment.

“I do not believe these drugs are game changers — not in the way people think they will be,” she says.

Michael Mina, assistant professor of epidemiology at Harvard, says vulnerable people should be given home Covid tests, which could be authenticated remotely and enable prescriptions to be delivered by an Uber-style service. One US-based telemedicine service, eMed, is planning to send antiviral prescriptions to people who have positive rapid test results.

“If you don’t have a test sitting in your cupboard waiting to be used then how many days does the average person go from the moment they have a sniffle to actually getting off their butts and getting a test?” asks Mina.

Perhaps an even trickier task will be deciding who gets the limited supply in the short term. Merck expects to have 10m courses of treatment by the end of 2021, while Pfizer plans to make 180,000 courses by the end of the year and 50m in 2022.

While both drugs were tested in unvaccinated populations, the impact of the drug may be far less clear in vaccinated people. Another antiviral developed by Roche and Atea Pharmaceuticals failed to reduce participants’ viral load any more than a placebo when studied in a mixed group of vaccinated and unvaccinated.

Pfizer is studying the treatment in vaccinated people but has not yet published the results.

“If Paxlovid does not benefit vaccinated patients, this could question the need for large supplies of Paxlovid, which could be very expensive,” says Andrew Hill, a senior visiting research fellow in pharmacology at the University of Liverpool.

Analysts expect the companies to price their drugs at about $700 for a course of treatment. Craig Garthwaite, a professor in hospital and health services at Kellogg School of Management in Illinois, says that looks like a “pretty fair price” for reducing costly hospitalisations but not if it is to make sure the vaccinated “don’t get the sniffles”.

Healthcare providers could end up restricting the drug to the unvaccinated, even though vaccines — costing from about $4 to $25 a dose — would have been far cheaper.

Dominic Wilkinson, a professor of medical ethics at Oxford university, says this is a new front in a familiar debate about whether people who have some responsibility for their illness — such as smokers with cancer — should share the costs.

However, he said it was “relatively unlikely” that care would be changed depending on “if someone wore a mask, socially distanced or was following the rules”.

The developed countries’ rush to secure supply of the antivirals is reminiscent of the early contracts for the Covid-19 vaccines, which left the rest of the world scrambling for scraps.

The US has agreed to spend $2.2bn on about 3.1m courses of the Merck drug, and the UK signed agreements with Merck and Pfizer for almost 750,000 courses between the two. Japan, Australia and South Korea are among the countries that also have deals.

Eric Topol, director of the Scripps Research Translational Institute in California, warns that the pills are being “scoffed up by the rich countries again, just like the vaccine”.

However, the pills are easier to manufacture and distribute than the shots. Merck has already signed a voluntary licensing deal with the Medicines Patent Pool, a UN-backed public organisation, to boost low-cost generic manufacturing for developing countries. Pfizer is in talks with the MPP, according to people familiar with the discussions, who say they are “optimistic”.

Speaking at an FT conference this week, Dolsten of Pfizer said he hopes the pill will be more fairly distributed but said it was not as simple as “a company being willing”, urging the creation of a global public organisation to get the system to work for low and middle income countries.

“I keep my fingers crossed that for the oral pill . . . that we will be able to do better across the global ecosystem,” he said.

How Long Should You Spend on Analyzing a Stock Chart
Why is Protagonist Therapeutics (PTGX) Soaring 90% Today?
Can Drones Save Ambarella?
Which Big Tech Stock to Buy on the Dip
How To Trade False Breakouts: Beginner Guide