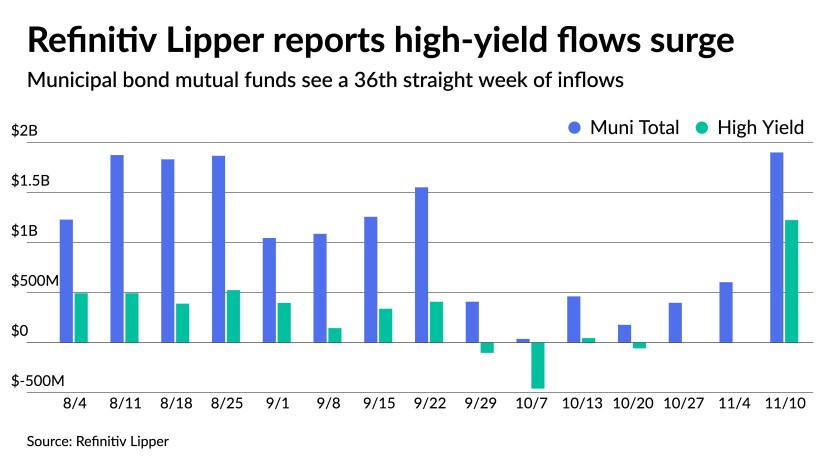 Municipal bonds were slightly weaker Friday inside 10 years, but trading was light and munis still outperformed U.S. Treasuries, which weakened further on the day from Wednesday’s large sell-off.

Investors put nearly $2 billion into municipal bond mutual funds for the most recent week with high-yield reversing a downward course to hit $1.2 billion following $1 million a week prior, according to Refinitiv Lipper data.

It was the 36th consecutive week and the largest reported inflows since July and the second-largest inflows into high-yield in 2021.

The focus this week shifted to economic releases, with the CPI topping the list, and the above-projected read led to the bear-steepening of UST. Despite the large U.S. Treasury sell-off, munis are “in much better shape technically than last month,” said Barclays strategists in a Friday report.

Ratios have “declined meaningfully as a result — we suspect municipal yields have some catching up to do to the upside in the near term,” said Mikhail Foux, Clare Pickering and Mayur Patel in a weekly report.

“Given rising investor concern that the Fed is falling behind the curve and moving too slowly despite stronger payrolls and inflation data, Treasury yields have been trending higher and yield curves have been flattening,” the Barclays strategists said.

While lagging a bit, muni curves have also been getting flatter, and the long-end has finally started performing, with the 10s30s curve flattening by about 10 basis points in November, they said.

“As investors await the start of tapering, and given that the economic data will likely remain strong as the effects of the Delta strain abate, we could see more flattening of muni curves near term, although the long end (especially the 20-year part of the curve) is far from cheap compared with shorter-dated maturities,” the report said.

But they said because municipal credit largely managed through the pandemic, and most sectors have recovered from it, largely befitting from the federal support, the market saw this well in advance.

“Credit spreads even for high-beta credits have fully recovered and are currently trading at, or close to, their all-time tights — even the IG-HY index differential is near its lows,” the report said.

In the taxable space, they said, municipals have been lagging corporates since the second half of 2020 — more so for intermediate bonds, as long-dated taxables have recovered faster — but the muni index is now trading well through the similar-maturity corporate index.

As such, “we do not see a meaningful selloff in muni credit in the current market environment, as municipalities’ fundamentals remain strong and they are flush with cash.

“However, we also do not expect much of a rally from current levels — for credit spreads, sideways trading is the most likely outcome, in our view,” they said.

The calendar is led by Mississippi (Aa2/AA/AA/) with $1.225 billion of tax-exempt and taxable general obligation bonds, the largest tranche of which is a $900 million taxable refunding.

Secondary trading
Not much to write home about for a relatively quiet Friday, trading down about 19% from Wednesday’s levels, but certain prints were clearly cheaper.

Treasuries were weaker and equities made gains.

The four-week moving average remained positive at $768.916 million, after being in the green at $409.586 million in the previous week.

Powell vs. Brainard
With Jerome Powell expected to be renominated as Federal Reserve Board chair, with an outside chance that Fed Gov. Lael Brainard may be chosen to replace him, analysts say the difference between the two in terms of monetary policy might be minimal.

The market seems to be concentrating on “the arguably unfounded assumption a Brainard Fed would result in a slower, more accommodative pathway than would a second-term Powell Fed,” said Stifel Chief Economist Lindsey Piegza.

With inflation at the level it’s at, she said, “we contend the leadership at the Fed would matter less than many anticipate, at least in the near term, with both candidates likely to maintain the asset reduction pathway previously discussed and moving on to rate hikes by the end of 2022.”

Rising inflation expectations suggests the market is “less convinced the Fed will move at an appropriate pace to quell the upward momentum.”

The odds of a Powell renomination are about 2-to-1, according to Luigi Speranza, chief global economist at BNP Paribas Markets 360 and his team, with Brainard given a vice chair role.

Among the benefits of a Powell renomination, he said, are continuity when monetary policy is at a crucial period, easier Senate confirmation, and “shields somewhat the White House against Republican attacks on inflation.”

With two open spots and possibly more depending on whether Powell and Vice Chair Richard Clarida are renominated, “the next FOMC is likely to have a more dovish inclination than the current one,” Speranza said. “But a Brainard appointment is likely to give further confidence to the markets that the Fed is in no rush to spoil the party.”

While Powell would have some support from Democrats, although Sen. Elizabeth Warren strongly opposes another term, given her belief his Fed has walked backed too much supervision, many Republicans see Brainard as too progressive, he said.

If nominated and confirmed, Brainard “would have to tone down some of [her] positions in an attempt to build consensus, in our view, but her position would still make a difference at the margin, especially in the context of an overall more dovish committee.”

With data will determine the Fed’s monetary policy path, Speranza said, “A Brainard appointment would not significantly change the Fed’s overall policy stance over the next four years. However, her dovish bias could still make the difference at the margin by making an acceleration of tapering plans less likely and delaying rate liftoff a bit longer.”

In data released Friday, the University of Michigan consumer sentiment index fell to 66.8 in November from 71.7 in October, while the current conditions index fell to 73.2 from 77.7 and the expectations index dropped to 62.8 from 67.9.

“Consumer sentiment tumbled to a ten-year low in November,” noted Wells Fargo Securities Senior Economist Tim Quinlan, Economist Shannon Seery and Economic Analyst Sara Cotsakis. “Sentiment has been shaken in recent months amid the more recent outbreak of COVID, dwindling stimulus and sharply higher consumer goods inflation. But the details of today’s pessimistic read on sentiment for November makes it clear that inflation is weighing on the minds of consumers.”