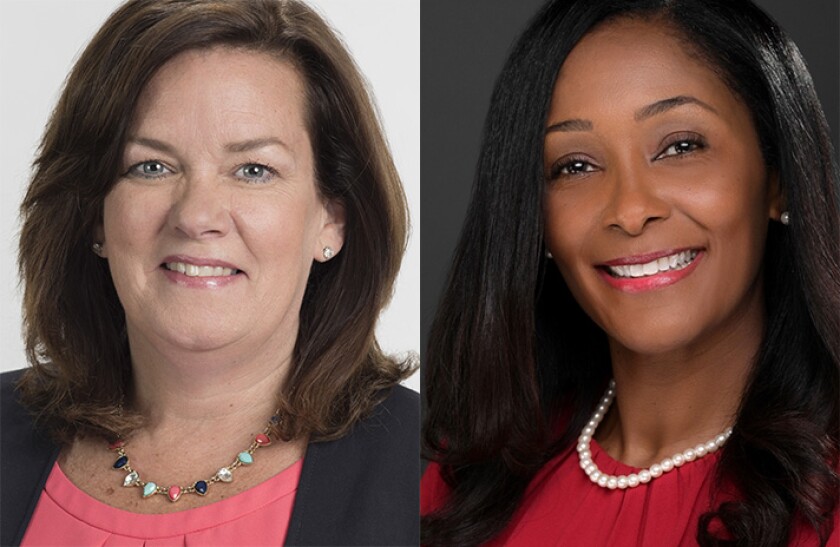 Along with Prunty and Wood, the Northeast Women in Public Finance have selected a dozen other honorees in the private and public sectors as Trailblazing women in public finance.

The Freda Johnson award is named for Johnson, a founding board member of the organization and executive vice president and public finance division head at Moody’s Investors Service for nearly two decades. It is given annually to trailblazing women — one in the private sector and one in the public sector — who exemplify the qualities the person brings to the industry.

In another year marked with the COVID-19 pandemic hanging over, Johnson and the Northeast Women in Public Finance will formally present the awards at The Bond Buyer’s Deal of the Year ceremony — in person — on Dec. 16 in New York City at Guastavino’s.

The date marks the 11th anniversary of the Freda Award and the seventh year the Northeast Women in Public Finance, along with The Bond Buyer, expanded it to cover two public finance professionals, one each from the public and private sectors.

Johnson noted the role mentorship played in deciding both this year’s private and public sector recipients, a key to why the award is so important.

“Robin has demonstrated excellence in every field in which she has been engaged: as an analyst, a manager, and a mentor. She is true role model for everyone,” Johnson said.

“[Arlesa] is a dedicated public employee, an impressive manager and a kind and generous person. Her activities as a mentor demonstrate her commitment to helping the younger generation.”

Wood said she was thankful to follow in the footsteps of Johnson, and previous award winners.

“For me, to be recognized as a respected industry leader and trailblazing woman in public finance is exhilarating and emotional, because I love what I do,” Wood said. “Having over a 29-year career with Miami-Dade County government, and 26 of those years dedicated solely to municipal bond finance, makes this award extremely personal for me.”

Prunty said she was humbled and honored to be one of 2021’s awardees.

“The existence of the Northeast Women in Public Finance and the mentoring and networking opportunities it provides underscores the unique nature of the municipal bond industry,” Prunty said. “To be recognized by Freda and all of those trailblazing women who came before, who paved the way for others to advance their careers in this market, is really special.”

And while the once white male-dominated finance industry has made strides in diversity over the past few decades, breaking those glass ceilings still takes time.

Prunty reflects that when she returned to work at S&P after her first child, she was the only working mother, while Wood said she remembers her predecessor, also a woman, telling her that she might have to be a little tougher to get the respect she deserved.

Both say they’ve seen evidence of the industry’s evolution firsthand.

Prunty said S&P has more than 40 working mothers, as the company and industry at large have embraced more flexible work options and become more accommodating. Wood also said she’s witnessed more women in the space and in leadership roles.

“I do see women making strides and gains in every aspect of public finance. We were underrepresented and we’re making headway,” Wood said. “There’s more of us coming into the field and more of us assuming top management roles in public finance.”

Despite the extra efforts needed to stand out as a woman, both find it satisfying to be where they are in the public finance industry, for many reasons. They say the work they do for state and local government finance is meaningful.

“It’s very rewarding to work on bond transactions that make a difference in people’s lives, that solve very significant public policy challenges, and that provide opportunity for economic growth and development,” Prunty said.

And for young women coming into the field or who are still relatively new to the industry, Prunty and Wood offered that this is an industry ripe for growth.

“The primary piece of advice that I would have for anyone in this industry is to come to work every day preparing to learn something new and keep that continuous learning up,” Prunty said. “There are always different and innovative things happening from a public policy or capital market standpoint that allow for growth both personally and professionally.”

Prunty said networking is also important, though she concedes that’s been rather difficult for new professionals to get to know their colleagues and other industry folks during the COVID-19 pandemic.

While there is some catch-up to do with establishing face-to-face interactions, she said as the world has started to open up, people are embracing what’s available and making up for lost time.

“I would tell women to be strong and to stand your ground. Ask questions. Don’t take no for an answer. Don’t hesitate. Don’t be afraid to take chances. Don’t be afraid of failure,” Wood said. “You learn from all of your experiences and they’re not necessarily always failures.”

The 2021 Trailblazing women in public finance are: