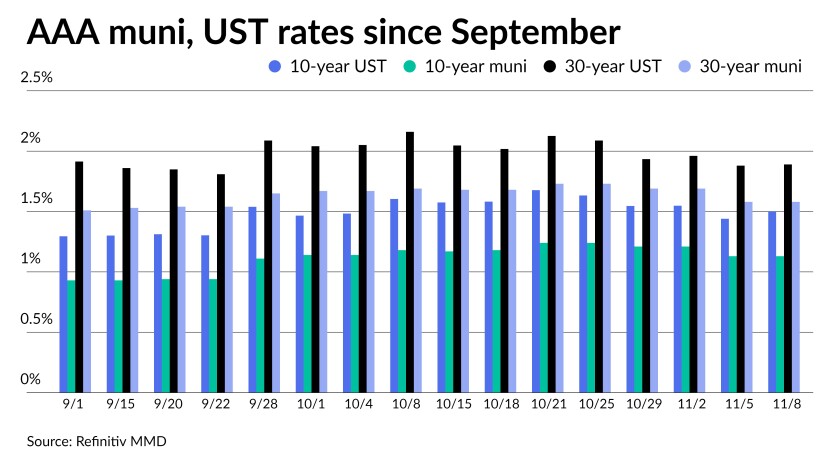 Municipals were steady on Monday as all eyes were on the more than $9 billion of supply headed to the primary in a holiday-shortened week.

“The municipal market is focused on the number of deals being priced Tuesday and Wednesday,” a New York underwriter said Monday, pointing to the Veteran’s Day market close on Thursday.

“In fact most of the calendar will be priced tomorrow, which could put pressure on the market,” he said.

Ahead of the glut of paper, there was light trading in the secondary market and the high-grade scale was steady on Monday.

Municipals were part of a wider fixed income market rally as high-grade yields were lower by as much as six basis points on the long end, buoyed by the stronger-than-expected October jobs data and upward revisions to non-farm payrolls numbers for September and August.

Friday’s rally sustained lower rates, a flat yield curve and overall strength on the long end of the market.

How the rally continues to impact the market before this week’s holiday is the question, according to the New York underwriter.

“Munis outperformed Treasuries by six basis points in 30 years and many of the deals were heavy with long bonds, so we have to see if that forces a slight sell off,” he said.

The larger calendar this week could portend heavier weekly volume between now and year-end given the arrival of holiday lulls in issuance, which effectively limits available marketing time, according to Jeff Lipton, head of municipal credit and market strategy and municipal capital markets at Oppenheimer Inc.

“With ample cash remaining on the sidelines, we see a pick-up in interest across investor types,” Lipton said Monday.

The retail crowd is displaying some renewed interest, according to Lipton, yet still remains tentative putting cash to work.

Market technicals should be supportive through year-end as Bloomberg reports $24 billion in bond calls and maturing securities over the next 30 days, he said.

“Against this backdrop, better technicals, which are framed by 34 consecutive weeks of fund inflows, may very well promote positive performance, or at the very least, limit any downward trajectory in monthly returns through year-end,” Lipton said.

Much ado about the Fed
With little in the way of economic data on Monday, the Federal Reserve headed the news, with many officials speaking and one announcing his departure, giving President Biden two open spots on the Board, with another two expiring.

The speakers tended to confirm that liftoff won’t occur before midyear, but the market is pricing in as many as three rate hikes next year.

The yield curve flattened in October “as the short end of the curve moved up in expectation of an early rate hike, while the long end moved down based on expectations of a Fed policy error,” said John Luke Tyner, a fixed income analyst at Aptus Capital Advisors. “The uncertainty of who will become the next Fed chair is likely exacerbating the yield curve issues.”

And while this doesn’t signal a recession, “there could be a premature rate hike, negatively impacting the economy, without a Powell-led Fed to control some of the Hawkish member.”

“For the Fed, once tapering ends in June 2022, we expect the discussion around the timing of liftoff to ramp up,” said Morgan Stanley Chief U.S. Economist Ellen Zentner in a note. “Labor market developments will be key and while liftoff before the end of 2022 deserves some risk premium, we do not expect the Fed to judge the labor market at maximum employment before 2023.”

While characterizing liftoff as “clearly a ways away,” Fed Vice Chair Richard H. Clarida said, if labor and inflation follow his projections, “then I believe that these three necessary conditions for raising the target range for the federal funds rate will have been met by year-end 2022.”

But, he added, inflation measured by personal consumption expenditures has suggested “much more than a ‘moderate’ overshoot of our 2 percent longer-run inflation objective, and I would not consider a repeat performance next year a policy success.”

Further, he “and 12 of my colleagues believe that the risks to the outlook for inflation are to the upside,” which could lead to earlier/more aggressive policy moves.

Liftoff, he said, “will depend on economic outcomes,” and the “many uncertainties to the outlook and changing circumstances” as a result of COVID-19 “could lead the FOMC to move up or delay rate increases.” Even so, he continued, “it looks like we are in for a low rate environment for some time to come.”

Indeed, the Federal Reserve Bank of New York’s October Survey of Consumer Expectations showed “uncertainty and disagreement about future inflation increased at both the short- and medium-term horizons to new series highs.”

Respondents still see inflation rising 4.2% over a three year-horizon, unchanged from last month, while one-year inflation expectations rose to 5.7% in October, the highest since the survey began in June 2013, from 5.3% in September.

Employment also seems to be improving. The Conference Board’s Employment Trends Index gained to 112.23 in October from 109.68 in September, suggesting “strong employment growth is in store over the next several months,” said Gad Levanon, head of the group’s Labor Markets Institute.

Federal Reserve Bank of Philadelphia President Patrick Harker said while he doesn’t foresee liftoff before taper ends, “we are monitoring inflation very closely and are prepared to take action, should circumstances warrant it.”

Also Monday, Randal Quarles said he would give up his seat on the Board at the end of December. Quarles’ post as vice chair of supervision expired in October and he was relieved of those duties when his term elapsed. Although Quarles had said he might complete his term on the Board despite losing the chairmanship — which would be an unusual turn of events — in the end he chose to leave before expiration of his Board tenure.

Fed Vice Chair Richard Clarida’s term expires in January and Fed Chair Jerome Powell’s term is up in February. Much speculation has occurred as to whether Powell will be re-nominated and Biden last week promised to act “fairly quickly” on the chair spot.

If Clarida isn’t re-nominated, it would allow Biden to name three new Board members, and four if Powell, still expected to be re-nominated, is replaced as Chair.