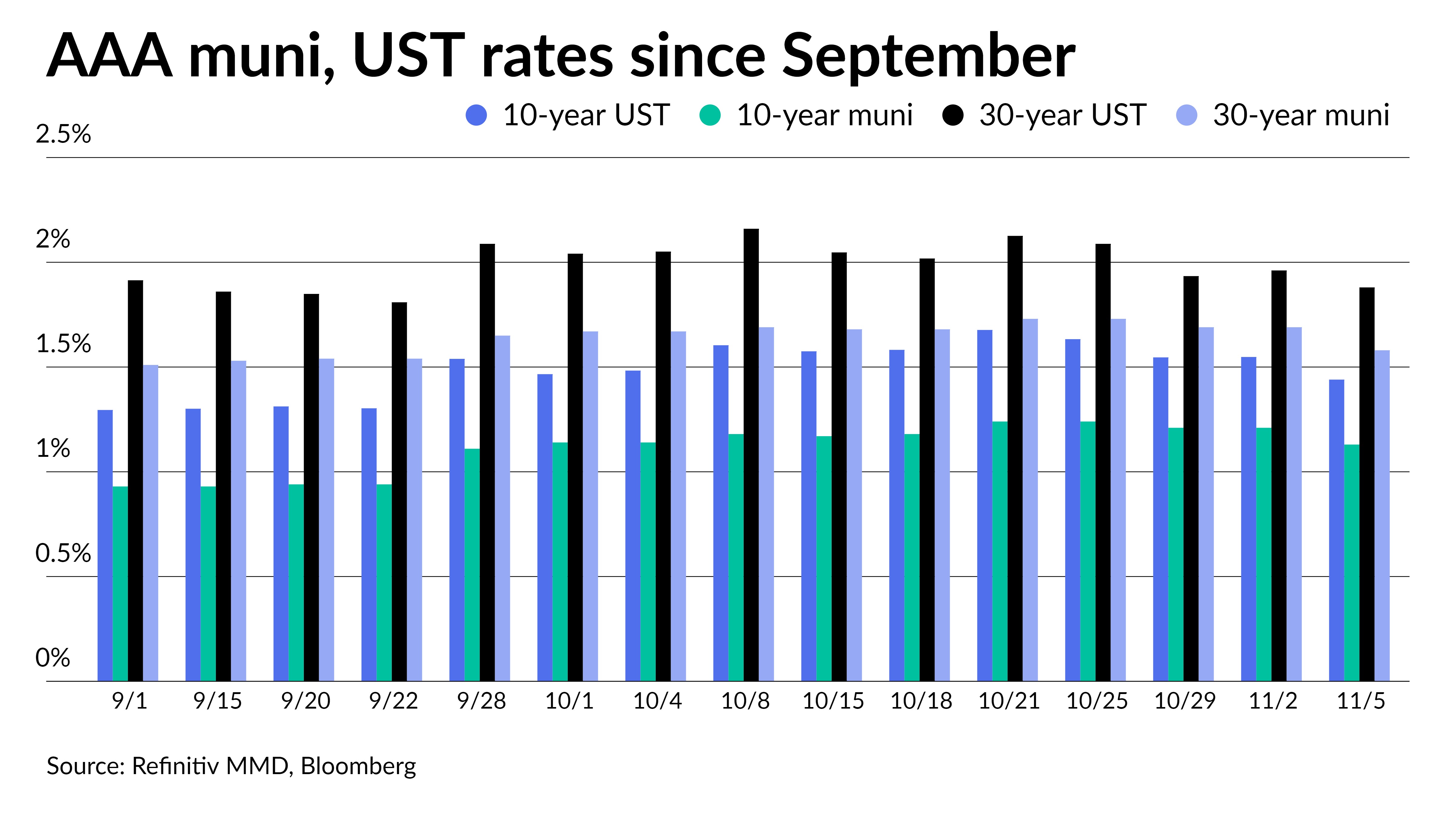 Municipals were part of a wider fixed income market rally on Friday as high-grade yields were lower by as much as six basis points on the long end, buoyed by the stronger-than-expected October jobs data and upward revisions to nonfarm payrolls numbers for September and August.

The rally sustained lower rates, a flat yield curve and overall strength on the long end of the market on Friday ahead of a four-day abbreviated week, observed John Farawell, manager of municipal trading at Roosevelt & Cross.

“That number today was definitely bullish for bonds and makes people think the Fed has everything under control,” he said on Friday. Long yields were bumped as much as six basis points.

The municipal rally occurred with a backdrop of good news on the jobs front and ahead of more than $9 billion of potential new issuance next week.

“The solid number helped our market out” by allaying some market fears over the potential for stagflation, Farawell said.

The conditions are ripe for new supply, but next week’s $9.6 billion isn’t that much to write home about, according to Farawell.

Secondary activity was prompted by the “huge jump” in Treasury yields — which ended at 1.45%, after being at 1.60% in recent trading sessions — and seasonal factors, according to Farawell. Investors “were grabbing anything they could on the long end today,” he said.

Next week $9.6 billion is expected, comprised of $6.714 billion of negotiated deals and $2.885 billion of competitive loans. Taxables make up $2 billion with $7.6 billion of exempts.

Barclays strategists Mikhail Foux, Clare Pickering and Mayur Patel said muni yield curves have been flattening, but not as fast as the Treasury yield curve. The 20s30s part of the tax-exempt curve is especially steep when compared to the inverted UST 20s30s.

“We expect stronger performance to end the year, although at current levels the upside is likely capped, as MMD-UST ratios are far from cheap, although they are more attractive than they were in the first half of the year,” they said. “In our view, the muni market will likely trade sideways for a couple of weeks, until all uncertainties related to the Build Back Better plan are ironed out, but we will likely end 2021 on a strong note.”

Activity outside of 10 years saw yields fall as much as six basis points.

“Monetary policy remains highly accommodative in an economy where inflation is elevated and labor markets have yet to fully recover,” she noted. “With both supply and demand factors clearly at play, the choices for policymakers will be complicated as uncertainty remains high for how temporary or persistent these frictions will prove to be.”

But she said time for “patience in the face of these inflation pressures has diminished.”

And the October employment report’s strength, along with upward revisions to the August and September payrolls numbers again raises the question of whether the Fed will have to speed up taper and raise rates aggressively.

“This report tilts slightly hawkish for the Fed in our view, possibly bringing rate hikes earlier on the margin,” Wilmington Trust Economists Luke Tilley and Rhea Thomas. They added everything depends on what the Fed uses to determine a full labor market recovery, which may be contingent on the participation rate.

“We currently expect the first hike to come in November or December of 2022,” Tilley and Thomas said, “but that can easily move earlier if inflation keeps up and the labor market tightens further.”

Since the Fed, in its post-Federal Open Market Committee meeting statement, allowed for a change in the pace of taper, if needed, “another gain in employment like this virtually guarantees that will happen in early 2022,” said Diane Swonk, chief economist at Grant Thornton. “The threshold for a liftoff in rates is much higher but could easily occur by mid-2022.”

Should the economy continue to pick up steam, she said, the Fed could announce a hastening of taper in December, she said. “We are now expecting three rate hikes in 2022.”

With Americans not working tapping into savings, many should return to the work force next year, easing the labor shortage, said Gad Levanon, head of the Labor Market Institute at The Conference Board. While it’s not the base case, the chances of labor shortages continuing in 2022 “are significantly increasing,” he said. “In that case, a wage-price spiral — where higher prices and rising wages feed each other, leading to faster increases in both — could have major economic implications.

“In such an environment, the Federal Reserve might be forced to raise interest rates significantly more than the two hikes markets are currently expecting.”

Wage growth and the voluntary quit levels suggest a tight labor market, noted Wells Fargo Securities Senior Economist Sarah House and Economist Michael Pugliese. “Other indicators that inform the Fed’s view of maximum employment are still off the mark but are moving the right direction.”

They pointed to the unemployment rate, which fell to 4.6% in October from 4.8% in September, “is rapidly closing in on the FOMC’s long-run estimate of 4.0%,” and the 104,000 workers who joined the labor force.

“Exits of older workers continue to look fairly sticky, but the participation rate among prime-age workers ticked up, driven by women ages 25-54,” they said.

Not everyone agreed. The Fed will maintain its “wait-and-see stance on interest rate hiking,” said Edward Moya, senior market analyst for the Americas at OANDA. And traders will “fixate” on the upcoming releases of consumer and producer price indexes.

“This was a strong labor market report, but it was far from perfect,” Moya said, noting the labor participation rate held at 61.6%. “It would have been nice to see the participation rate increase, which is why you should take the larger-than-expected dip with the unemployment rate with a grain of salt.”

The “report does really move the needle in either direction on the ‘Great Resignation’ debate,” Wilmington Trust’s Tilley and Thomas said. “The labor force picked up just a bit but remains 3 million below pre-pandemic levels. That’s just a decline of 1.8% even though it feels like ‘no one is working’.”

Jessica Lerner contributed to this article.