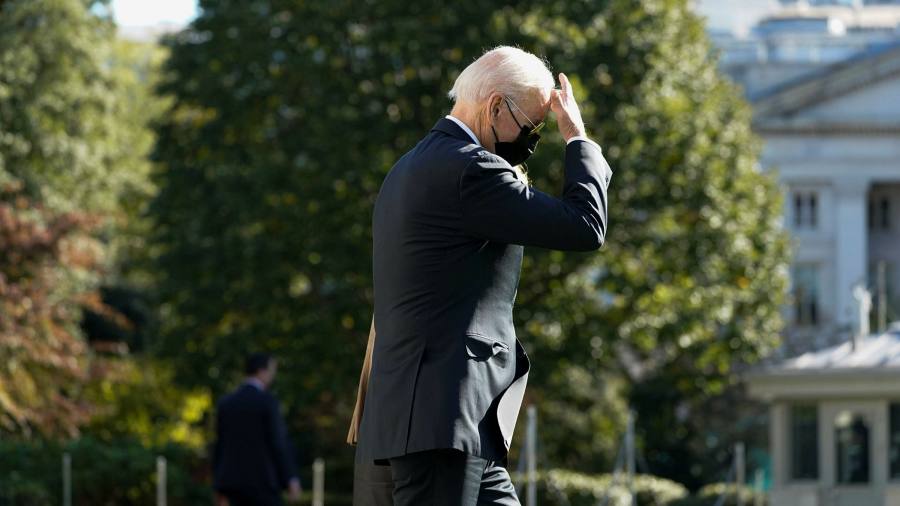 Joe Biden has promised to pass a $1.75tn social spending bill as he looks to capitalise on the momentum provided by the passage of his $1tn infrastructure plan.

The US president on Saturday welcomed Friday night’s vote in the House of Representatives which guaranteed the bipartisan infrastructure package will now become law.

That bill was opposed by six progressive members of his own party, who had wanted to pass it at the same time as the social welfare bill, which the White House has dubbed “Build Back Better”. Biden sought to allay the concerns of those members on Saturday by insisting that the larger package would pass, despite the reservations of centrist Democrats in the Senate.

“We will pass this in the House and we’ll pass it in the Senate,” the president said. “The Build Back Better act will be a once in a generation investment in our people.”

“I’m not going to get into who made what commitments to me. I don’t negotiate in public, but I feel comfortable. I feel confident that we will have enough votes to pass the Build Back Better bill.”

The president promised the new legislation would create jobs and reduce inflation, saying: “This bill is designed to give ordinary people a fighting chance, to begin to sort of level the playing field just a little bit.”

In his first public remarks since the Democrats’ defeat in the Virginia governor’s race this week, the president said he thought voters were punishing his party for its failure to pass key legislation.

The infrastructure package was passed in the House on Friday night in a 228-206 vote, with 13 Republicans joining most of the Democratic caucus.

The bill, which passed the Senate in August, will now be sent to Biden’s desk to be signed into law.

The vote provides a much-needed legislative win for the US president as he contends with low approval ratings and anxiety within his own party over its prospects in next year’s midterm elections following dramatic swings to the Republicans in elections this week.

House Speaker Nancy Pelosi had vowed to press ahead with the infrastructure bill while delaying consideration of the separate, larger social spending package popular with leftwing Democrats.

In doing so, she broke a longstanding promise to move the two bills through Congress together as demanded by progressives who have prioritised the programmes in the larger package, including subsidies for childcare and sweeping investment in efforts to combat climate change.

For several hours on Friday it was uncertain if progressives would sign on to the infrastructure package. At one point, Biden — who had postponed a planned trip to his holiday home in Delaware — called into the meeting in a last-ditch effort to win their support.

In the end, the majority of House progressives said they would vote in favour of the infrastructure bill after their moderate colleagues promised to vote for the Build Back Better bill no later than the week of November 15.

At the start of the day, Democratic leaders had intended to pass both bills before the weekend. But then a group of at least six House moderates, including Josh Gottheimer of New Jersey and Abigail Spanberger of Virginia, said they would not vote for Build Back Better until they saw official cost estimates from the Congressional Budget Office, an independent agency.

Critics have questioned the White House’s insistence that the measures would be “fully paid for” through a crackdown on tax evasion, a corporate minimum profits tax and a new tax surcharge for people earning more than $10m a year.