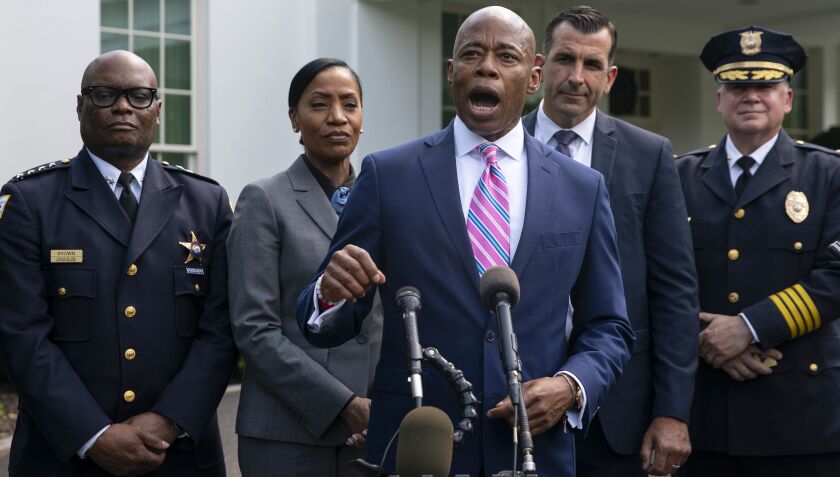 Eric Adams, New York City’s next mayor, will have to hit the ground running on Jan. 1 when he succeeds fellow Democrat Bill de Blasio, who held the office for eight years and could not seek re-election because of term limits.

“The problem is that he won’t have much of a honeymoon,” said Nicole Gelinas, a senior fellow with the Manhattan Institute for Policy Research. “De Blasio didn’t bequeath him a very good legacy. He didn’t leave much in budget reserves and he hasn’t been dealing with a rise in violent crime.”

Democrat Adams, the Brooklyn borough president and retired police captain, defeated Republican and former talk-show host Curtis Sliwa on Tuesday by a margin of approximately 67% to 30%.

Adams will become the city’s second Black mayor after David Dinkins, who governed from 1990 through 1993.

Adams, who campaigned as a moderate, will likely face an even more progressive 51-member City Council. The majority of members in January will be new, primarily because of term limits.

“It’s starting to get attention but maybe not as much as it should,” said Howard Cure, director of municipal bond research for Evercore Wealth Management. “The new members of the City Council are sure to be pretty far to the left of Adams, and are not necessarily aligned with the Democratic establishment.”

Adams must grapple with COVID-19 pandemic effects that include hovering remote-work patterns that affect tax revenue and real estate values.

According to a report by outgoing city Comptroller Scott Stringer, city sales tax revenue could drop by $111 million annual from the work-at-home dynamic, as spending closer to home replaces spending near offices.

“The elephant in the room is what I think of as ‘remote everything,’” Anthony Townsend, a visiting scholar at Cornell Tech, said at an October New York University Rudin Center conference.

A set of technologies and practices emerged impromptu as the pandemic escalated early in 2020, said Townsend, author of the book “Smart Cities.”

“As cities everywhere have started to recover, there’s been a lot of angst about ‘are people going to return to offices?’” That’s particularly important for central business districts, for Manhattan as the driver of the region’s economy,” he said. “There are fewer people here and they are spending less money, and we have a lot of big office buildings that require a lot of energy and a lot of wealth tied up in them that are kind of idled.

“The transportation infrastructure is organized, historically, around people’s journey to work.”

Adams must present his first spending plan to the City Council in January, with the preliminary budget due late January to kick off the three-stage process. His executive budget is due in late April with the council required to sign off on the plan by June 30.

Adams, who received endorsements from municipal unions, is not expected to take a hard line on labor-related matters such as contributions to health plans. “That’s understandable because no one wants to get off on the wrong foot with the workforce,” Gelinas said.

Adams will be working with Gov. Kathy Hochul, also a Democrat, who faces a gubernatorial election next year. Hochul succeeded Andrew Cuomo when he resigned in August.

“I’m here to declare there is a new day dawning and a whole new era of cooperation — where the only thing that the city of New York and the state of New York are fighting about is fighting to make your lives better,” Hochul said at Adams’ victory party Tuesday night. “We’ll fight for you and not fight each other anymore.”

“There’s always been tension between past governors and mayors as to who the top dog is,” DiNapoli said on a Bond Buyer podcast. “In my youthful days I remember some of the competition, the rivalry, between [Nelson] Rockefeller and [John] Lindsay.

“Fast forward to recent years and Cuomo and de Blasio, especially during the pandemic. It was not helpful to anybody. I don’t think it was helpful to their reputations, either. The bickering was constant, and certainly at a time when we needed everybody working together.”

Gelinas called the civility between Hochul, who took office in late August, and the outgoing de Blasio a step in the right direction.

A Hochul-Adams relationship could be mutually beneficial, Gelinas added. Hochul, also a Democrat, is up for election next year. One of her first moves as governor, in a nod to city and minority voters, was to name state Sen. Brian Benjamin, a Harlem Democrat, as lieutenant governor.

“She needs the city voters to run,” Gelinas said. “She’s been shoring up her support in the more old-fashioned Black community as opposed to the newer, multiracial communities. She’s been banking on people like Hazel Dukes and Brian Benjamin.”

Dukes, who endorsed Hochul in next year’s race, is president of the NAACP’s New York chapter and the organization’s national past president.

“I think Eric Adams can give real political cover to the legislature and the governor on things like housing,” said Kathryn Wylde, president of the business organization Partnership for New York City. She cited debate over good-cause evictions. “This is particular to Eric Adams, being a Black man who is not scared of the far left.”

Adams has begun saying the right things to win back businesses, Wylde added. That included his proposed jobs-match mechanism.

“He has already said he would attempt to reduce regulations and other mandates that would make it difficult to start a new business.”

Wylde also cited the importance in attracting tech and deflecting the kind of anti-tech sentiment that led Fortune 500 behemoth Amazon to withdraw its planned headquarters for Long Island City, Queens.

“New York is attracted to tech because we are the global center of finance and of the media,” she added. “The financial industry tends to be the first to adopt new technology.”

According to Andrew Rein, president of the watchdog Citizens Budget Commission, policy thrusts that “grow jobs and grow housing” are vital.

“Attack the land-use process and involve the Economic Development Commission,” Rein said. “You cannot be static, you have to be dynamic.

On Thursday, Adams got into a friendly competition with Miami Mayor Francis Suarez who won re-election on Tuesday and said he would become the first American politician to accept his salary in Bitcoin.

“In New York we always go big, so I’m going to take my first THREE paychecks in Bitcoin when I become mayor,” Adams said in a tweet. “NYC is going to be the center of the cryptocurrency industry and other fast-growing, innovative industries! Just wait!”

Hurricane Ida’s damage was the latest reminder of the city’s exposure to sea-level rise and water surge.

Wylde wants Adams early in his administration to restore a sense of safety and security. “That includes a rapport with the police department and the communities of color in the city, and knowing the police can do their job without trampling on the rights of the community.

“He’s indicated that he wants to get New Yorkers who have lost their jobs to COVID back to work,” Wylde added. “The business community looks forward to working with him to see what’s required to do that.”

S&P Global Ratings, in a publication Wednesday, said it expects only modest changes in the city’s day-to-day operations under Adams, resulting in no near-term impact to the city’s AA GO rating.

S&P said it viewed his election “potentially providing a clean slate relative to aspects of the city’s governance under our environmental, social, and governance factors. While the city’s credit profile already benefits from risk management and oversight provisions under the Financial Emergency Act like a balanced budget requirement, we have viewed other aspects of its governance as mixed, similar to those of large peers.”

New leaders at the helm of the state and the city have an opportunity to reset relations, S&P said, adding that as a former state senator, Adams could have leverage in Albany to benefit the city’s financial plan. His background as Brooklyn borough president provides insights into the city’s operations and challenges, which S&P said could bolster strong planning practices. Finally, as a former police officer, he may have an improved relationship with the NYPD.

In the city comptroller’s race Tuesday, Democrat Brad Lander defeated Republican Daby Carreras by a 69% to 24% margin. He will succeed Scott Stringer who was term-limited out office after two terms.

Incumbent Democrat Jumaane Williams defeated Republican Devi Nampiaparampil for the public advocate post by a margin of approximately 68% to 24% with three other candidates garnering 8% between themselves.

Hochul is facing a Democratic primary in the gubernatorial election in 2022. Attorney General Letitia James has already announced her intention to run against her and de Blasio and Williams have expressed their interest in joining the fray in the quest for the state’s top job.