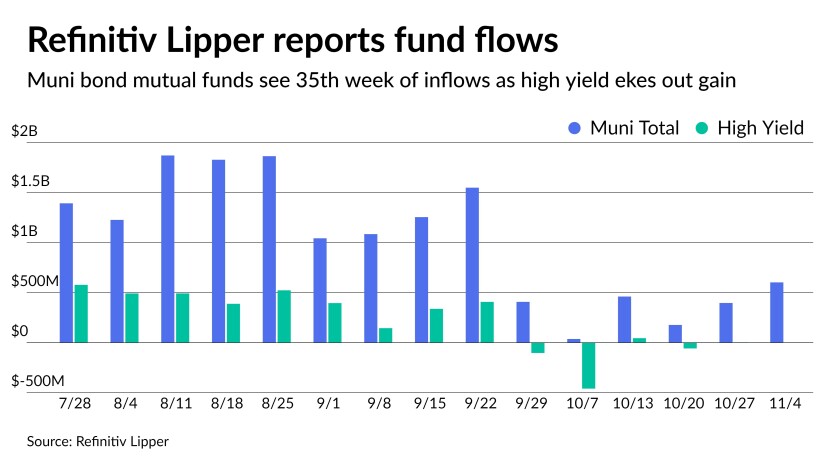 Municipals were stronger Thursday out longer, while U.S. Treasuries rallied, larger on the shorter end, and Refinitiv Lipper reported $600 million of inflows, the most since mid-September, signaling the fund complex is still engaged in the asset class.

Munis largely underperformed the curve steepening in UST, which saw levels fall nine basis points on the five- and 10-year and seven on the 20- and 30-year, pushing both below 2%.

Secondary trading was on the lighter side and down 22% from Wednesday, but there was two-way flow and clear moves to lower yields on high-grade names and recently issued bonds, particularly outside of nine years.

For 35 weeks in a row, investors put cash into municipal bond funds as Refinitiv Lipper reported $603 million in the latest period while high-yield funds eked out a gain of slightly more than $1 million.

The primary on Thursday was active after a FOMC-muted session Wednesday.

A 30-year LA DWP inter-dealer trade cleared at 1.72% in the secondary, indicative of dealer sentiment for the larger bumps out long.

Attention will turn to the employment report Friday and a more robust calendar with bellwether credits that is building. Thirty-day visible supply climbed to $15.56 billion. A refocus on new slightly lower yields and higher ratios may position investors to be more selective in the coming week after supply this week was lacking in high-grade names.

The competitive calendar includes California, Wisconsin, Florida and Minnesota credits while the District of Columbia headlines the negotiated space.

Treasuries were stronger and equities were mixed at the close.

The four-week moving average remained positive at $409.586 million, after being in the green at $268.070 million in the previous week.

What will taper mean?
With the Fed giving itself flexibility about speeding up taper, it signaled a “split” within the panel, said Diane Swonk, chief economist at Grant Thornton. “The Federal Reserve has been growing more divided over the course of the summer and into the fall,” she said. “Chairman Powell would prefer to wait out inflation longer than many of his colleagues.”

The Fed will need to hasten the tapering early next year, she predicted. “This will open the door to sooner and more aggressive rate hikes.”

Her expectation is three rate hikes in 2022.

“The Fed is likely behind the curve and will have to move to a more hawkish stance and flag a pace a sooner and faster pace of rate hikes than it does currently,” said Sebastien Galy, senior macro strategist at Nordea Asset Management.

The Fed’s statement that it could alter the taper schedule creates “greater uncertainty about the path of monetary policy ahead,” said DWS Group U.S. Economist Christian Scherrmann. The pace of taper will provide “implicit guidance” about liftoff, with the second half of next year the current target.

Powell was masterful “threading a needle” in his press conference, said Jason England, global bonds portfolio manager at Janus Henderson Investors. He was “not leaning either dovish or hawkish.”

And while unemployment should drop as the virus comes under control, “the ultimate composition of the jobs market remains uncertain as the participation rate remains near 40 year lows,” he said. “While its dual mandate would require that it remain on the sidelines until that employment gap is closed, it may be forced to address persistent inflation that does not prove transitory.”

But ultimately, Loh said, without “hard metrics” on the Fed’s thinking about too high inflation levels or full employment, “we are left guessing when it will start the tightening process.”

If employment gains match those of the summer, liftoff in the last half of 2022 “will become a possibility,” he said, “particularly if inflation remains elevated.”

But “spotty jobs reports, with signs of transitory inflation,” would push off the initial rate hike.

“It is the uncomfortable position of slow job gains and continued elevated inflation prints that will create uncertainty,” Loh said. “Powell did however define transitory inflation as not having permanently higher prices, which the market continues to agree as transitory.”

The “tightrope walk” in the statement “signaled to me that the Fed lacks confidence in their ability to even forecast these apparent transitory factors,” said Lon Erickson, portfolio manager at Thornburg Investment Management. The “statement contained no signs of improvement to their forecasts and was packed with hedges so large a semi-truck could drive right through.”

Yet, the Fed maintains credibility and leeway, he said. And while the Fed didn’t set parameters for maximum employment or “what level of inflation is problematic,” Erickson said, “I believe the greater looming uncertainty is about how the Fed will make decisions, not any lack of movement.”

Moving slowly, given higher inflation and slower employment gains, is the only chance Fed has of “succeeding at the high wire balancing act.”

The level of inflation combined with economic strength suggest the Fed should be tapering more quickly, said Mickey Levy, Berenberg’s chief economist for the U.S., Americas and Asia, and a member of the Shadow Open Market Committee. “Remember, interest rates are zero, deeply negative in real terms and far below the Fed’s current estimate of the natural rate of interest at 2.5%.”

Despite no evidence of a wage-price spiral, “we do see higher inflationary expectations already influencing wage and price setting behavior in a re-enforcing pattern and worry that monetary and fiscal policies affect economic activity with a lag,” Levy said.

The Fed being more worried about employment than inflation most of this year, he said, contributed to higher inflation expectations. “We hope the Fed is right but worry that its monetary policies are not tilted toward the risks.”

Some analysts addressed Powell’s renomination, or the selection of another chair for the Fed. Thornburg’s Erikson said, “I think Powell loses his job in a game of political chess.” While keeping Powell insures “policy continuity,” he said, “I think Biden will have to sacrifice him to placate the progressives now that key parts of their agenda have been struck from proposed legislation.”

The fact that Powell has not yet been renominated “is fascinating,” said Edward Moya, senior market analyst for the Americas at OANDA. “The longer it takes Democrats to pass Biden’s infrastructure spending and economic package, the more nervous financial markets should become with Fed Chair Powell getting renominated.”

Tuesday’s elections, Moya added, “sent a message to the Biden administration and he is running out of things to offer progressives.” Replacing Powell might “appease Sen. Elizabeth Warren and other progressives.”

The productivity drop “says more about the temporary divergence in growth and employment trends over the quarter than about the outlook going forward,” said Wells Fargo Securities Senior Economist Sarah House.

“While the typical cyclical boost to productivity is behind us, we expect Q3 to be the low point for the cycle and the trend to strengthen ahead on the back of the impressive investment cycle to date. In the near-term, however, rising unit labor costs are expected to keep the heat turned up on inflation.”

The international trade deficit soared to $80.9 billion in September from a downwardly revised $72.8 billion in august, first reported as $73.3 billion.