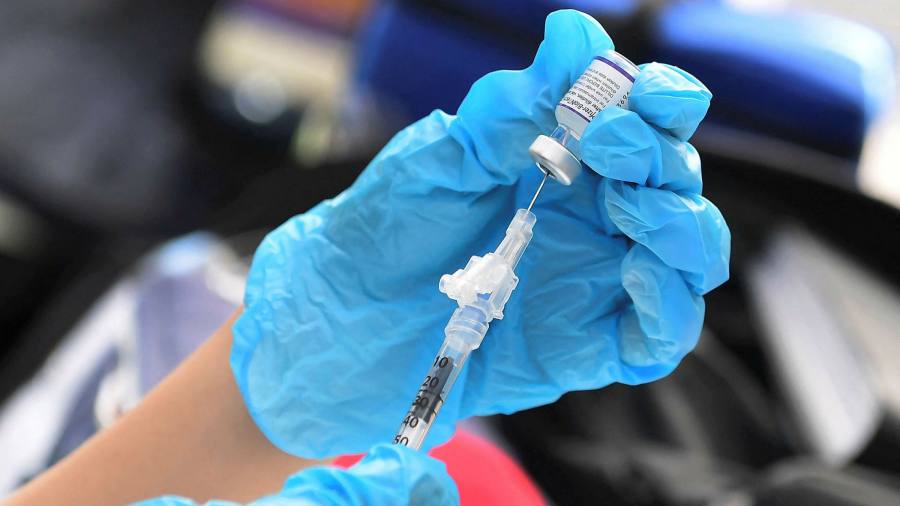 Pfizer has more than doubled the 2021 sales forecast for its Covid-19 vaccine since February and predicted another bumper year in 2022 as it expands global distribution and begins shipping jabs for boosters and children.

The US company said on Tuesday that it expected to generate $36bn in sales this year and $29bn in 2022, underlining how the vaccine developed with German partner BioNTech is dominating the global market and transforming the company’s finances.

The group, which shares profits on sales of the Covid shot evenly with BioNTech, generated direct sales of $13bn in the third quarter. Analysts had forecast Covid vaccine revenues of just under $11bn on average, according to a poll by Refinitiv.

Pfizer has repeatedly upgraded its 2021 sales forecasts for its Covid vaccine, projecting $15bn in annual sales in February and then raising that to $33.5bn in July.

“Pfizer are already dominating the Covid vaccine race and are likely to consolidate their position in the coming months,” said Geoffrey Porges, analyst at SVB Leerink.

“They have consistently outflanked their rivals, and they did it all without tangible government support — hats off.”

The Pfizer jab’s four-week average market share in the US increased from about 56 per cent in April to 74 per cent on October 31. In the EU, it went from about 70 per cent to about 80 per cent during the same time period, according to a presentation by Pfizer.

Pfizer has avoided many of the controversies that have affected rivals such as Moderna, Johnson & Johnson and AstraZeneca related to rare side effects such as myocarditis and blood clots. The Pfizer jab was the first to gain approval from US regulators and emergency use authorisation for children and booster shots.

However, Pfizer has faced criticism from some non-governmental organisations over delays in shipping jabs to developing countries, particularly those in Africa, where just over 6 per cent of the population are fully vaccinated.

Albert Bourla, Pfizer’s chief executive, said the company was boosting supply to low- and middle-income countries. Three-quarters of vaccine revenues generated in the third quarter came from supplying countries outside the US.

“We remain on track to achieve our goal of delivering at least 2bn doses to low- and middle-income countries by the end of 2022 — at least one billion to be delivered this year and one billion next year,” he added.

Pfizer upgraded its full-year 2021 revenue forecasts to between $81bn and $82bn on the back of its vaccine success. The previous forecast was $78bn to $80bn. Earnings are expected within the range of $4.13 to $4.18 per share when adjusted for acquisition-related costs and other significant items, up from a previous estimate of $3.95 to $4.05, said the company.