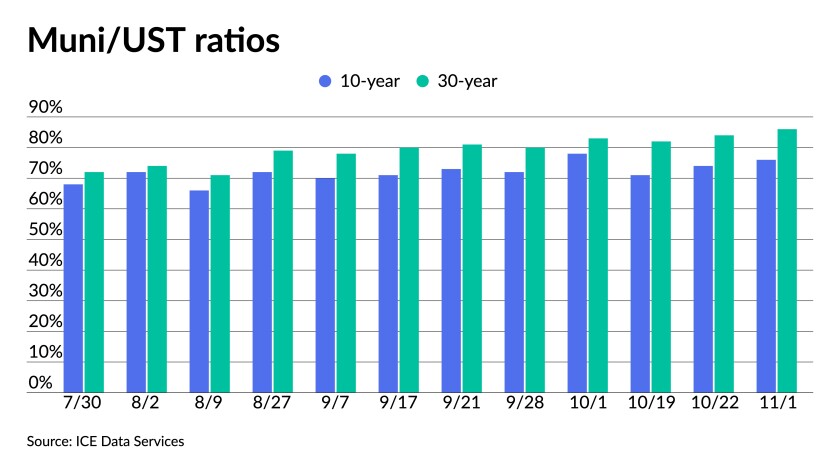 Municipals were little changed and lightly traded Monday as the market readies for the new month and lighter supply this week while all eyes remain on Wednesday’s FOMC meeting.

Triple-A benchmarks were little changed on Monday while ratios hovered near recent levels. Municipal-to-UST ratios saw the 5-year at 53%, the 10-year at 76% and the 30-year at 86%, according to ICE Data Services.

November is likely to be more volatile than October. Though monetary policy has been in the forefront, at mid-month the tone changed with global inflation outlooks and federal infrastructure and social package in flux, noted Kim Olsan, senior vice president at FHN Financial.

“What the market thought was a path toward higher individual and corporate rates has turned more suspect and brings into question how much additional demand may develop (or current inquiry be sustained),” she said. These factors combined to create weakness across most municipal sectors last month.

Despite low yields, she said defensive duration allotments paid off last month. Short-term bonds ended flat in October, outperforming intermediate and long bonds by 30-40 basis points. However, earlier gains out the curve have both 10- and 30-year-range bonds up 1.25% to 2% on the year. A curve slope of about 150 basis points will hold enough lure for inquiry stretching past short-term bonds to reach hard yield or taxable equivalent yield targets.

Taxable munis were helped by a UST rally, earning 0.39% last month and sitting with a near-1% gain for the year, she said. Issuance totaled $12 billion per Bloomberg data, well off last year’s election-driven surge but ahead of the yearly pace of $9.7 billion.

The luster of high yield is coming down, and “recent fund flows suggest buyers have turned more cautious on the category, perhaps realizing credit spreads have gone about as far as they can,” Olsan said.

“Municipal yields will have a hard time moving substantially lower through the end of the year, as new-issue supply will likely remain outsized,” they said. “We expect both municipal and Treasury rates to remain range-bond in the near term. Beginning in January, we should have a better idea of whether the economy has fully recovered from the pandemic.”

The Puerto Rico Oversight Board’s announced last week that it accepted recently passed legislation clearing the way to finish restructuring the island’s debt and Miller and Persson pointed to an upcoming $60 million Puerto Rico hospital deal as a positive signal for the territory.

“An old and once-popular Puerto Rico credit — Auxilio Mutuo Hospital — returns to the market this week, a sign that market access is returning to Puerto Rico credits that were blocked due to its bankruptcy proceedings,” they wrote.

In late trading, Treasuries were mixed and equities were up near the close.

Fed fears
Despite the certainty the Federal Open Market Committee meeting will end with a taper announcement, some concern remains.

“No matter what, the Fed is going to need to thread the needle very carefully this week given recent bond market dynamics,” said John Hancock Investment Management’s co-chief investment strategists Emily Roland and Matt Miskin. “A flattening yield curve is a problem for the Fed, as it limits the amount of tightening they can do without inverting the curve — a classic harbinger of recessions,” they said. “However, if the Fed stays on the sidelines for too long, inflation may get out of hand.”

“Regardless of the measure used, the Fed finds itself confronting inflation that at this point … is difficult to characterize as transitory,” he said.

And transitioning monetary policy is never easy. “The Fed does not sport a stellar record of policy transitions and this week’s meeting will be met with some trepidation,” said Daniela Mardarovici, co-head of us multisector fixed income at Macquarie Asset Management.

Federal Reserve Chair Jerome “Powell is faced with the difficult task, especially when observed by markets through a microscope, of acknowledging inflation pressures while reassuring markets that the Fed will not stifle the demand recovery in its infancy,” she said.

Recent data suggest the possibility of stagflation grew, Mardarovici said. “And while the Fed has been historically adept at managing rising inflation, it is not well-equipped to manage supply-side pressures in an era of fragile and woefully unequal economic growth.”

Expect “an overhaul” of the post-meeting statement, according to Morgan Stanley Research. The committee will offer more guidance on inflation, they said, which “will require a substantial rewrite of the statement.”

During his press conference, they said, “Powell is likely to continue to stress that liftoff remains far off.”

Grant Thornton Chief Economist Diane Swonk agrees, “the FOMC will have to address the thorny issue of inflation in its statement on policy.” That could take the form of “removing the word ‘transitory.’”

While she believes taper will begin with a $15 billion reduction, “the Fed could accelerate the tapering process if necessary to get to liftoff sooner; that is looking more probable,” she said.

This, despite slowing inflation. “It may not slow fast enough to become insignificant for the public,” Swonk said. “The reason the Fed has a 2% target on inflation is because few struggle to deal with prices moving up too rapidly or falling too quickly when overall inflation is close to 2%.”

If COVID becomes a major issue again, the economy could take another hit, and that would change the Fed’s thinking, she added.

But despite the high levels of inflation, Greg McBride, chief financial analyst at Bankrate, noted, “much can change in the months ahead. Economic growth, employment, financial stability, and geopolitical concerns are all variables that will come into play in addition to inflation.”

“The GDP number, unemployment, and the slight inversion of the 20 year and 30-year UST bond hints at a not so vibrant economy,” he said. “So the taper should occur as scheduled but the Fed raising rates soon seems unlikely. The question is inflation really transitory also adds to the Fed’s dilemma.”

Two scenarios exist for taper, according to Ed Al-Hussainy, senior interest rate and currency analyst at Columbia Threadneedle Investments. The generally expected $15 billion to $20 billion monthly reduction in asset purchases beginning this year and ending by June, or a faster taper allowing rate hikes earlier in 2022.

Strong earnings and other data offset the weakness in the employment report, said Peter Cramer, senior managing director and head of insurance portfolio management at SLC Management. “Long real yields and inflation expectations appear to disagree with the signals emanating from the front end of the curve,” he said. “30-year real yields are lower month to date and are now near their all-time lows, which is historically inconsistent with an imminent taper.”

And while risks of a policy mistake “tend to increase as greater hawkishness enters the forecast,” Cramer said, “not this time. Despite aggressive hikes getting priced in, the Fed’s 5y/5y — which is a calculated level of inflation expectations for a five-year period that begins five years from today — moved higher.”

His takeaway? “While tapering remains on track, the road to rate hikes remains treacherous.”

In data released Monday, the Institute for Supply Management’s manufacturing index dipped less than expected, registering 60.8% in October, down from 61.1% in September.

Economists polled by IFR Markets expected a drop to 60.5%.

The prices index gained in the month.

Separately, construction spending dropped 0.5% in September after a 0.1% rise in August.

The Successor Agency to the Redevelopment Agency of the City and County of San Francisco (/AA///) is on the day-to-day calendar with $107.34 million of taxable third-lien tax allocation bonds, 2021 Series A (affordable housing projects) (social bonds), serials 2023-2031, insured by Assured Guaranty Municipal Corp. Citigroup Global Markets.

Jessica Lerner contributed to this report.