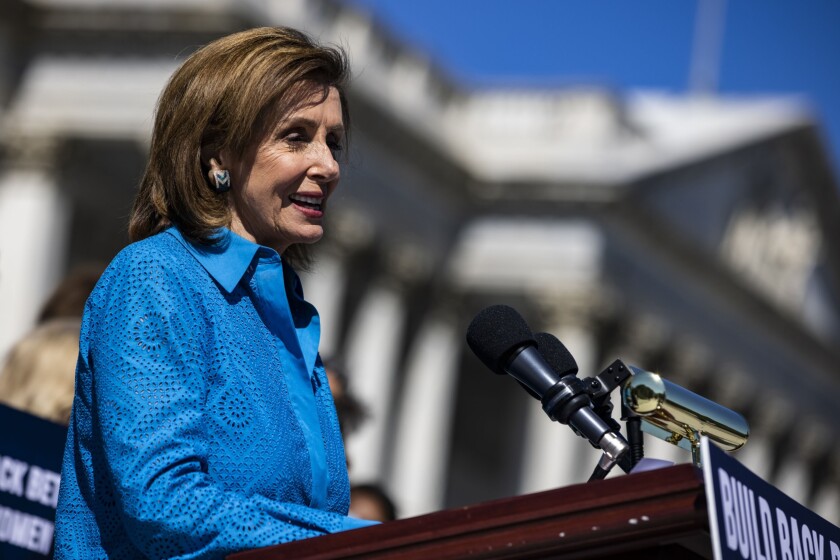 The Build Back Better legislation unveiled by the White House yesterday not only failed to include municipal market priorities but may also hurt demand for muni bonds by institutional investors.

The bill features a new 15% corporate minimum tax that would apply to the adjusted financial statement income for corporations with more than $1 billion in annual income. By including financial reporting income, the provision would likely include tax-exempt income.

“This tax, if imposed as it appears, would directly affect banks and property and casualty companies as buyers of tax-exempt bonds and would represent a tax on otherwise tax-exempt interest,” the Bond Dealers of America said in a statement. “The provision would dampen corporate demand for tax-exempt bonds and would likely lead to higher financing costs for state and local governments. Hopefully Congress will reconsider this hasty proposal before the legislation is finalized.”

The new tax is estimated to raise $325 billion, according to the Build Back Better framework.

The provision is part of the newly released $1.75 trillion budget reconciliation bill released Thursday by the White House and the House Ways and Means Committee. The bill was chopped in half from the original $3.5 trillion House package, which included a swath of muni-friendly priorities like a restoration of tax-exempt advance refunding and a new direct-pay bond program. The 15% minimum corporate tax comes on top of those losses. Overall, the BBB framework marks “a significant blow,” BofA Global Research said in a Friday note.

The corporate group that would be hit with the new minimum tax collectively represent about 24% of muni ownership, Morgan Stanley said in a note released Friday.

“The newly proposed corporate minimum tax, if enacted, could pressure valuations,” the bank said. In the medium term, the tax could mean higher average risk premiums and “more frequent bouts of volatility.”

It’s difficult to estimate the pricing impact of the provision, but as an example, the alternative minimum tax on private activity bonds is estimated to carry a 50bps penalty in the market, all else being equal, according to a 2018 Congressional Research Report on PABs.

“It is regrettable that the municipal bond provisions have been dropped from this version of the reconciliation bill and hopefully Congress will restore these important state and local government funding measures,” said Securities Industry and Financial Markets Association president and CEO Kenneth E. Bentsen, Jr. in a statement. “We are also concerned that the proposed change to the corporate minimum tax rate as currently drafted would have a negative impact on the demand for municipal bonds by some investors, increasing the cost to state and local government issuers.”

It may be too early to calculate the provision’s impact on demand, said Tom Kozlik, Head of Municipal Research & Analytics at HilltopSecurities.

The Build Back Better framework also features a new 5% surtax for individuals earning more than $10 million and an additional 3% on incomes above $25 million. Those provisions would likely boost demand as wealthy investors seek tax shelters, muni strategists said.

But then again, that demand boost may be offset by any reduction in the federal deduction cap on state and local taxes. A SALT overhaul is not now in the reconciliation bill, but several key lawmakers have said they will withhold their support unless it’s included.

Barclays noted that a two-year suspension of the SALT cap, which is being shopped around, might cramp demand for tax-exempts, especially those in high-tax states like California and New York. “Overall, we expect a drop in retail demand attributed to SALT, offset by increased demand from individuals in the higher tax brackets,” Barclays said in the report. “We think retail demand will remain solid, although it might abate a bit.”

Nothing is over until the bill is signed, sealed and delivered, market participants said.

Morgan Stanley noted that the executive branch would need to clarify the tax rules after Congress passes the bill, which “in theory could include clarifying that muni interest is not counted as taxable income for the minimum tax.”

Meanwhile, a planned House vote on a companion bipartisan infrastructure bill fell apart Thursday, forcing the House to pass another short-term extension of the surface transportation programs through Dec. 3 to avoid the Oct. 31 funding expiration.

Lawmakers are expected to return next week to resume negotiations on both bills, according to reports.