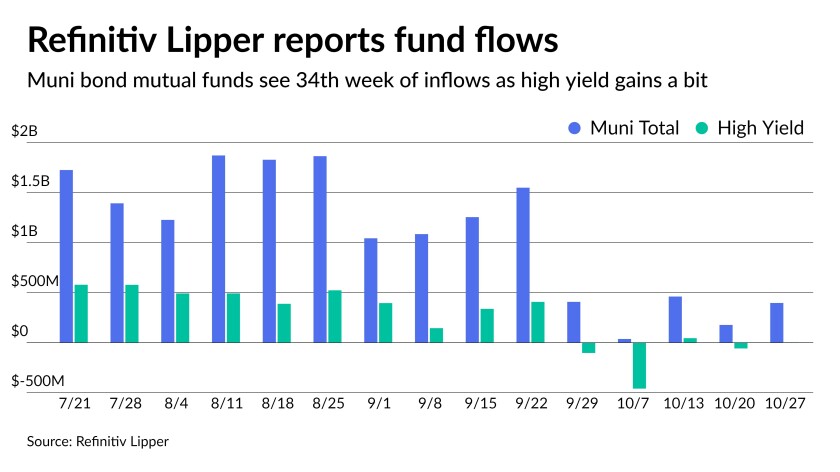 Municipals were steady but with a firmer bent as new issues were the focus even as volatility in U.S. Treasuries returned and yields swung higher, moving the 20-year bond above the 30-year.

Triple-A benchmark yields fell one to two basis points, with the larger moves outside 10 years.

For 34 weeks in a row, investors put cash into municipal bond funds, data released Thursday showed. Refinitiv Lipper said inflows into municipal bond funds totaled $397 million in the latest reporting period, up from $177 million a week prior, while high-yield funds turned slightly positive, experiencing $3 million of inflows. The flows, while smaller, signify that the fund complex is still engaged in the asset class.

Amid a flattening municipal yield curve and inversion of the Treasury market, new issues fared better than the secondary on Thursday as participants prepared for month end, according to John Farawell, managing director and head of municipal trading at Roosevelt & Cross.

“We’ve had some volatility in the Treasury market and there are still a lot of question marks,” Farawell said on Thursday as he said Treasury yields rose after a rally on Wednesday. He noted the yield on the 30-year Treasury is lower than the yield on the 20-year.

On the other hand, the new-issue market was getting all of the focus, while in the secondary market, there was brisk selling on the short end, while the long end saw a stronger bid side, according to Farawell.

“The primary market deals are doing fine, but the secondary market is a struggle because of the absolute yields,” as well as the flattening of the curve, he said.

He noted the difference in yield between the two and 10-year maturities is 100 basis points.

As end of the month neared, he said, investors with available cash were focused on evaluating their municipal portfolios due to changing market conditions, including the tightening.

“There is some cash in terms of month end and investors are freshening things up and reevaluating their positions,” Farawell said.

He said they were measuring their options on the long and short end of the municipal yield curve, and altering their duration.

“Some people are extending their duration due to the adjustments in the market and the firming out long,” he explained. “Last week, we had an adjustment in rates and we drifted up, now the curve is flattening and there is some short selling because yields are so low,” Farawell said. “By going out further they are getting more yield.”

Institutions with available cash to spend are docile, not aggressive, according to Farawell.

“We don’t see any panic buying due to month end — just the status quo and some sideways trading,” he said. “The right new issues are moving well, but the secondary continues to be a struggle” ahead of the start of a new month on Monday and a light forward calendar in New York.

“Next week there is not a lot of supply pressure,” Farawell said.

J.P. Morgan Securities priced for the Health and Educational Facilities Board of the Metropolitan Government of Nashville and Davidson County, Tennessee, (A3/A//) $57.86 million of tax-exempt revenue bonds (Vanderbilt University Medical Center), with 5s of 7/2031 at 1.68%, callable Nov. 1, 2031.

The four-week moving average remained positive at $268.070 million, after being in the green at $270.859 million in the previous week.

National funds had inflows of $396.609 million after inflows of $170.746 million while high-yield muni funds reported inflows of $3.232 million in the latest week, after outflows of $57.543 million the previous week.

In late trading, Treasuries were weaker and equities were up near the close.

Does slower growth worry the Fed?
Just when the Federal Reserve seemed to have a clear path ahead, another blip arises.

Advance third-quarter gross domestic product showed 2.0% growth slower than the 2.8% growth expected by economists polled by IFR Markets and down from the 6.7% gain in the second quarter.

“Q3 GDP data point puts the Fed in a bind,” said Sean Simko, head of global fixed income management at SEI. “We are starting to see slowing economic growth and sticky inflationary pressures. Slower growth was reflected in the drop in personal consumption. Individuals held back their spending tightening their purse strings.”

While one data point won’t change the Fed’s opinion about tapering, they must decide if this represents “a soft patch or the start of something more substantial?” Simko said. “The committee needs to answer that question and gauge if demand will add fuel to the inflation fire as supply chains remain troubled.”

Plus, the Fed won’t want to be seen as being behind the curve, he said. Next week’s meeting will offer clarity on taper, Simko said, “we will be looking to see if the Fed will adjust its inflation language and shifts its stance to expect an environment with prolonged inflationary pressures.”

Meanwhile, services consumption’s strength indicated consumers are ready to spend, he said, “the challenge is that it is hard to buy products given how lean inventories are.”

He estimated “supply shortages probably subtracted over 3.5% from the pace of growth versus what underlying demand would support.”

This is “likely at or near the worst of the situation,” Ruesterholz said, as demand should remain high as supply chain issues clear. It could take a year, though before things return to normal, he said.

“Because the growth slowdown is led by supply shortages and not waning demand, we believe the Fed will be inclined to look through it and announce a taper next week,” he said. “Moderating inflation in the report is in keeping with our view that inflationary pressures are at or near their peak.”

But, Ruesterholz said, “it will … take some time for inflation to normalize.” He expects inflation “above 3% into next summer.”

The Fed is expected to complete tapering before raising rates, so there will be two or three more quarters of growth statistics before a rate hike would be discussed, he said. Liftoff “is unlikely before the year end of 2022 or early 2023,” he said.

The 2.0% growth “would have been considered good pre-pandemic,” noted Grant Thornton Chief Economist Diane Swonk. “The economy held up better than expected during the Delta wave.”

Supply shortages, she said, caused housing to be “a drag on growth for the second quarter in a row.”

Indeed, pending home sales fell 2.3% in September and are 8.0% lower than a year ago.

“It’s worth noting that there will be less inventory until the end of the year compared to the summer months, which happens nearly every year,” said National Association of Realtors Chief economist Lawrence Yun.

Also released Thursday, initial jobless claims declined to a seasonally adjusted 281,000 in the week ended Oct. 23 from 291,000 a week earlier. This was the lowest level since March 2020, but still above pre-pandemic levels.

Chip Barnett contributed to this article