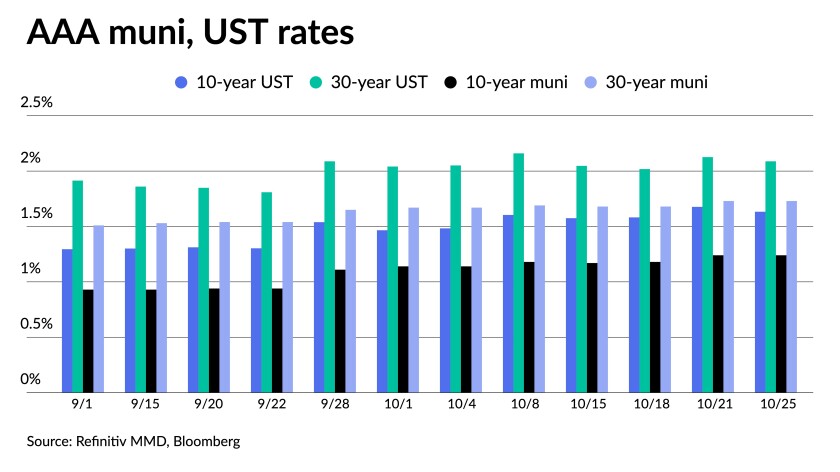 Municipals faced pressure on the short end, with the one- and two-year yields rising two basis points, while U.S. Treasuries saw gains on bonds inside five-years and equities were in the black.

For municipals, Monday’s session was more about readying for the primary and prepping for month-end positioning.

A bearish sentiment still underlies the municipal bond market, with a notably soft bid-side, according to Jeff Lipton, managing director of municipal credit research at Oppenheimer Inc. Lipton said municipal market sentiment will be driven by movements in Treasury bond prices, and a dramatic sell-off in that market could catalyze a reversal in municipal bond mutual fund flows.

“Despite the back-up in yields and ratios, retail remains tentative,” Lipton said Monday, noting spreads have been widening in the new-issue market.

CreditSights noted that tax-exempts are reliant on direct or indirect buying from individual investors, “which may get a boost next week when issuers pay out $23 billion of principal and interest payments on Nov. 1.”

While fundamental metrics are in flux, “the one definitive move has been a higher yield set with more attractive taxable equivalent yields in play,” said Kim Olsan, senior vice president at FHN Financial. She noted the 5-year AAA spot closed out January at 0.22% (0.35% taxable equivalent yield in the 37% bracket), and now offers a TEY just shy of 1%. Intermediate TEYs have moved up from around 1.15% at the beginning of the year to near 2% and long high-grade TEYs sit at 2.75%, up more than 50 basis points over the course of the year.

For now, munis are outperforming Treasuries, both on a month-to-date and year-to-date basis, Lipton said.

“We have reason to believe that the better relative returns can be sustained,” he said.

On the other side of this technical dynamic, supply trends are often driven by issuer sentiment, capital needs, views on interest rates, legislative developments, and revenue and budgetary conditions.

Thirty-day visible supply sits at $13.21 billion. But as the final weeks of the year approach, Lipton said, “there will continue to be ample cash awaiting deployment guidance and we do not see demand being fully satisfied even with ebbing bond redemptions and maturing securities over the near-term.”

In late trading, Treasuries were little changed as equities were up near the close.

Economy
Since the Federal Reserve appears to be using the playbook from the last recovery, which is quite different from the current problems, one analyst said it is likely to end badly.

“There is a growing risk that the Fed is forced to make a major policy pivot sometime in the next two year,” according to Ethan Harris, global economist at BofA Securities.

This recovery results from supply issues, unlike the demand problems in the previous crisis, he said. The recovery in the labor market has been much quicker than the previous downturn, and “a strong consensus” exists suggests achieving full employment next year, five years earlier than the last time.

“This raises the question: is unusually dovish Fed policy needed to achieve this outcome or are they throwing gasoline on the fire?” Harris asked. And while “it’s too early for a definitive answer,” he said, “clearly the risks are rising.”

BofA is focusing on the job openings and labor participation rates, inflation expectations, median and trimmed inflation measures, and what happens with wage pressures when more workers return.

To prove the point, he cites nominal final sales to domestic purchasers, which fell 7.8% in the second quarter of last year, but jumped 17.2% in the next four quarters, “its fastest year-over-year pace in modern history, lifting it 7.2% above its pre-pandemic level.”

When supply issues abate, he said, prices that soared as a result, will decline. However, the price increases in “some, like shelter, are expected to accelerate,” Levy said.

And further monetary policy stimulus will lead to demand gains, he said. “If monetary and fiscal policies generate spending as they are designed, then excess demand will keep inflation elevated,” Levy said. “This suggests the risks of inflation are decidedly to the upside.”

“Costs are soaring higher with not much relief in sight,” said Emily Kerr, Dallas Fed senior business economist. “More than three-quarters of manufacturers say their raw materials prices increased further in October, and a majority expect prices to be even higher six months from now. Commentary from firms points to increased distress over shortages of materials and escalating costs. Manufacturers are also continuing to have trouble finding the workers they need, and the survey’s wage measures remain highly elevated. Despite these challenges, outlooks improved modestly.”

Separately, the Chicago Fed National Activity Index fell to negative 0.13 in September from positive 0.05 in August, suggesting below-average economic growth in the U.S. in the month.

The index’s three-month moving average, CFNAI-MA3, slid to 0.25 in September from 0.38 in August.

The Health and Educational Facilities Board of the Metropolitan Government of Nashville and Davidson County, Tennessee, (A3/A///) is set to price Thursday $293.205 million of taxable revenue bonds (Vanderbilt University Medical Center), Series 2021A and 2021B. J.P. Morgan Securities.