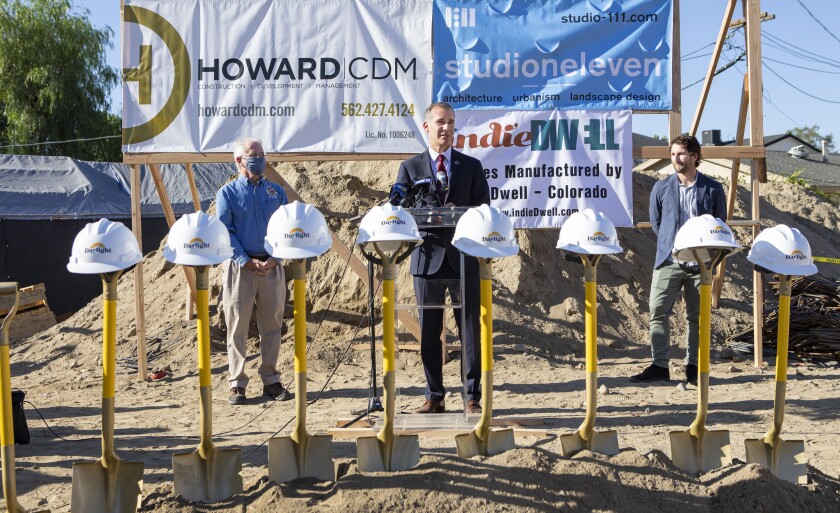 Los Angeles received an improved outlook from Fitch Ratings ahead of plans to issue bonds to build housing for people living on the streets.

Fitch revised its outlook on the city’s debt to stable from negative ahead of the $276.7 million competitive deal slated for Wednesday that pays for housing and refunds existing debt.

The housing crisis and homelessness have been at center stage in California politics and policy in recent years. The state and many big cities and counties have approved and sold billions of dollars of bonds to fund housing.

And yet, it’s hard to see an improvement in the number of people living on the street in California and in Los Angeles.

The new city bonds are issued under Proposition HHH, a $1.2 billion authorization by city voters in 2016 to fund supportive housing.

“The only way to move the needle is to increase the number of permanent supportive housing units,” said Ha To, the city’s debt manager. “The completion of the Prop. HHH units currently in development and the on-going support for affordable housing financing will do that. Although the city has created thousands of interim homeless interventions, only permanent housing units will help the city solve the homeless challenge.”

The city self-designated the $211.9 million Series 2021-A taxable general obligation bonds to support housing projects as “social projects,” based on the social benefits of addressing homelessness in the city, according to an online road show. The city also plans to sell $65.7 million 2021-B of tax-exempt GO refunding bonds.

The city felt comfortable self-designating the bonds, because the Series 2021-A is the third issuance of bonds for Proposition HHH and the permanent supportive housing projects that will be financed align with the International Capital Association’s definition of eligible social projects based on the social benefits of addressing homelessness within the city, To said.

“Through Proposition HHH, we have created thousands of new supportive housing units, exceeding our goal of 1,000 per year by 50%,” Garcetti said. “With every new groundbreaking and ribbon cutting, we welcome home Angelenos who have been living on the streets for far too long and set them on a path to a better future.”

The project received $4.9 million in funding from Proposition HHH, along with funding from Citibank, 4% Low Income Housing Tax Credits, and Federal Home Bank. The project will receive Section 8 project-based vouchers from Brilliant Corners.

Eighty percent of the proceeds of GOs issued under Proposition HHH must be used for permanent supportive housing and the remainder can be used to fund affordable housing without services.