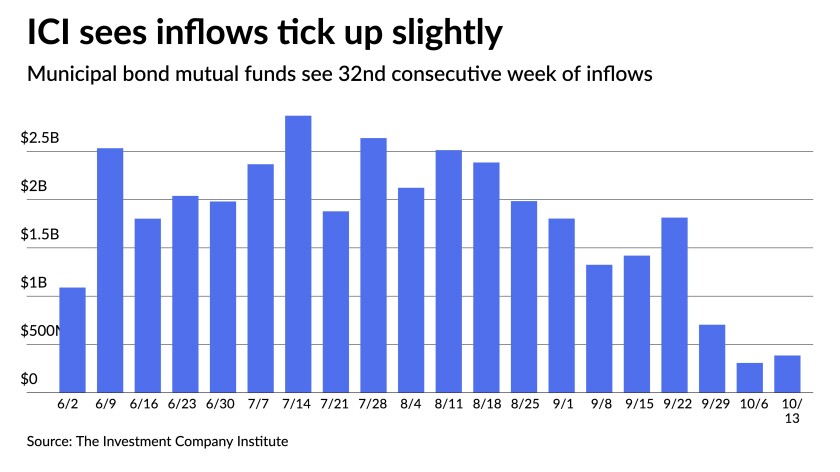 Municipal benchmark yield curves were little changed on average trading Wednesday as the primary was the focus while the Investment Company Institute reported another week of inflows into municipal bond mutual funds.

There was some uncertainty and a tentative mood hanging over the market, but traders said the large deals got done. Bids-wanted lists have been on the rise, though haven’t pushed yields higher but a basis point in spots over several sessions.

Another round of inflows was reported from the Investment Company Institute — the 32nd consecutive week — coming in at $385 million for the week ending Oct. 13, up from $308 million the week prior.

“I think the consensus is the market feels a little weaker even though benchmarks are mostly unchanged,” he said. “People think that the market is a little cheaper than what some of the indexes are claiming.”

“The market feels weaker than it is on paper, and in the back of people’s minds they are somewhat concerned about rates going forward,” he said, noting many different cross-currents from COVID-19 vaccines to interest rates and state budgets, the economy, and policies in Washington. “Some people are moving to the sidelines.”

“The Hudson Yard deal came at seemingly robust prices and got done,” the New York trader said. “In general business is getting done every day because there’s money out there.”

“I think in general people don’t believe munis at these percentage of Treasuries are really attractive, so they are being really selective,” he added.

Taxable money-fund assets gained by $5.88 billion, bringing total net assets to $4.376 trillion. The average, seven-day simple yield for the 771 taxable reporting funds sat at 0.02%, same as the prior week.

In late trading, Treasuries were softer as equities were mixed.

Fed headaches?
While the Federal Open Market Committee is expected to announce at its November meeting that it will cut back on its asset purchases, employment, inflation and economic growth data suggest taper could hurt the recovery.

And while the employment situation is improving and inflation remains high, Quarles said, “I do not see the FOMC as behind the curve, for three reasons: Most of the biggest drivers of the very high current inflation rates will ease in coming quarters, some measures of underlying inflation pressures are less worrisome, and longer-term inflation expectations are anchored, at least for now.”

While he sees inflation remaining above 2% next year, and that would be “too long” to still define inflation as transitory.

Waller said he doesn’t see liftoff right after tapering ends, but if inflation remains “considerably above 2% well into 2022, then I will favor liftoff sooner than I now anticipate.”

“Things are getting a little more difficult for the Fed,” said Peter Cramer, senior managing director of Insurance Asset Management at SLC Management. Two below-expectation jobs reports and declining growth expectations should mean less inflation, but “pockets of inflation are popping up everywhere and policy makers are being pressured to tamp them down,” he said. “It is feared that a meaningful effort to constrain inflation may have a damaging impact to financial markets and the labor recovery.”

While incomes have risen over the past year, they can’t match the rises in prices of food and fuel, Cramer said. “This will put considerable pressure on lower income families, which will in turn create greater political pressure.”

And if supply chain issues are to blame for inflation, he said, “it is unclear if tighter monetary policy is the appropriate prescription. Still, policymakers feel compelled to keep inflation expectations contained and the Fed appears ready to risk economic and market stability to accomplish this. Thus, despite some weakness in economic data, interest rates are traveling higher.”

Indeed, energy price spikes will probably prolong the inflationary spike, said BCA researchers in a strategy report. “This raises the risk that consumers could turn more cautious on spending behavior if they have to devote more of their incomes just to fuel their cars or heat their homes.”

This caution is already showing up in the U.S., they say, with the University of Michigan consumer sentiment report showing one-year inflation expectations at a 13-year high. Other surveys also show consumers expect inflation to outpace growth in the coming years.

This expected contraction in real income, they say, has tamped consumer sentiment “despite favorable US labor market conditions.”

BCA researchers say consumers are “overestimating how much their real incomes will suffer next year from higher inflation.”

The Fed could raise rates in the last quarter of 2022, BCA says.

The travel and tourism category was mixed. Employment was modest to moderately better, and while positions were available, not enough people were seeking jobs, the report said.

“Most Districts reported significantly elevated prices, fueled by rising demand for goods and raw materials,” according to the report. “Reports of input cost increases were widespread across industry sectors, driven by product scarcity resulting from supply chain bottlenecks. Price pressures also arose from increased transportation and labor constraints as well as commodity shortages.”