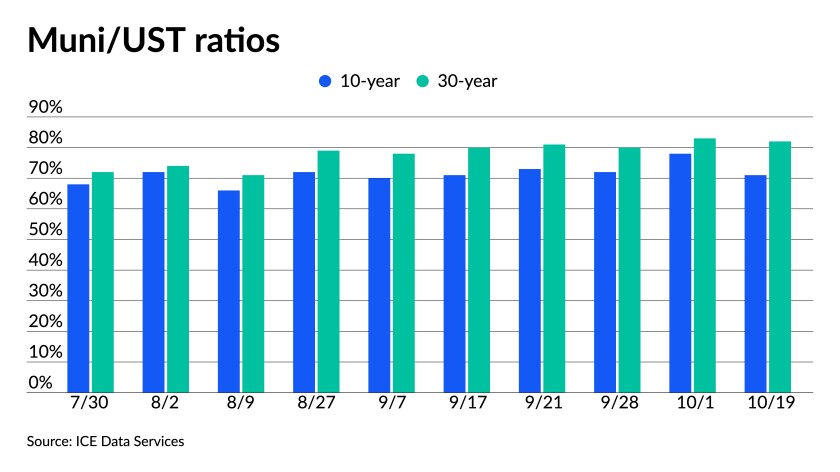 Municipals were softer with small cuts to benchmarks on Tuesday as the focus was mostly on the sizable new-issue calendar and deals were repriced to lower yields.

Spreads have been widening, but secondary trading was on the light side and triple-A benchmarks were cut by only a basis point in spots even as U.S. Treasury yields once again rose on the 10- and 30-year.

“Yields are mostly unchanged on MMD, but we are seeing some spread widening on coupons with a 3% and 2% handle on new issues,” a New York trader said. “It seems OK through 20 years, but the long end is definitely feeling a little squishy,” he said, noting that there is not as much demand focused on the long end.

The trader pointed to two negotiated deals that were priced historically attractive on Tuesday with wider spreads than usual for specialty state credits due to the market conditions.

“Georgia and Maryland are both specialty states and both deals came more attractive by 10 basis points — especially on the lower coupon stuff,” the trader said, noting the wider spreads were impacted by more selective demand in the last two weeks as well as the heavy new-issue calendar this week.

The trader said both deals saw incremental yield and were priced about 10 basis points more attractive up and down the yield curve compared to where those deals would have priced in the past.

In late trading, Treasuries were softer as equities were in the black.

Inflation, again
Inflation risks are to the upside, raising questions about the Federal Reserve’s contention that price pressures will be transitory, according to an analyst.

Part of the problem is the lack of definition in the Fed’s flexible average inflation targeting (FAIT), said Chris Wu, portfolio manager at Federated Hermes.

The parameters were adopted to allow the Fed to “catch up” on inflation, which had been below 2% for about a decade. But with the Coronavirus shutting the economy and creating havoc in supply chains, prices and wages have jumped, he said

“Virtually every broad measure of inflation is running at multi-decade highs,” Wu added. “But while the Fed may have gotten more than it wished for — inflation above 2% — it’s too early to call policy mistake.”

It’s possible inflation can run hot for “a lot longer than some investors think,” he said. The Fed never defined how far back it would look to determine the average. “This matters because the longer the Fed looks back, the longer it could let inflation run above 2% without feeling compelled to start reining it in,” Wu said.

And, “it’s too early” to determine if inflation is structural, he said. “The Fed’s FAIT strategy is being tested, and the test isn’t over yet.”

“Inflation is here to stay” according to Jim Smigiel, chief investment officer at SEI. “COVID-19 has been a significant impediment for global supply chains. Inventories remain exceedingly low relative to demand and input costs have been rising rapidly.”

For the most part, inflation numbers seem to continue surpassing expectations, he said. “Inflation expectations still seem low given the cautious commentary coming from companies grappling with supply-chain and staffing issues.”

SEI expects inflation to remain high, “not just over the next one or two years, but well into the decade,” Smigiel said.

Meanwhile, Joe Kalish, chief global macro strategist at Ned Davis Research, expects the supply chain issues and product shortages will be temporary. However, he said, these could “be replaced by more persistent pressures, resulting in a surge in inflation expectations.”

The labor shortage, for example, could cause “upward pressure on compensation, which eventually feeds into core inflation.”

But, for now, “disinflationary factors like technology, competition, aging demographics, and high debt levels should counteract these risks to inflation expectations,” Kalish said.

In data released Tuesday, housing starts and building permits fell in September, with starts down 1.6% to an annual pace of 1.555 million and permits off 7.7% to an annual 1.589 million rate.

With the multi-family sector mainly responsible for the decline, he said, “traders shouldn’t just expect this to confirm a peak is in place for the housing market.”

While inventory remains low, National Association of Realtors Chief economist Lawrence Yun noted, “year-to-date activity is solidly higher by 17% compared to 2020 and by 23% compared to the pre-pandemic year of 2019.”