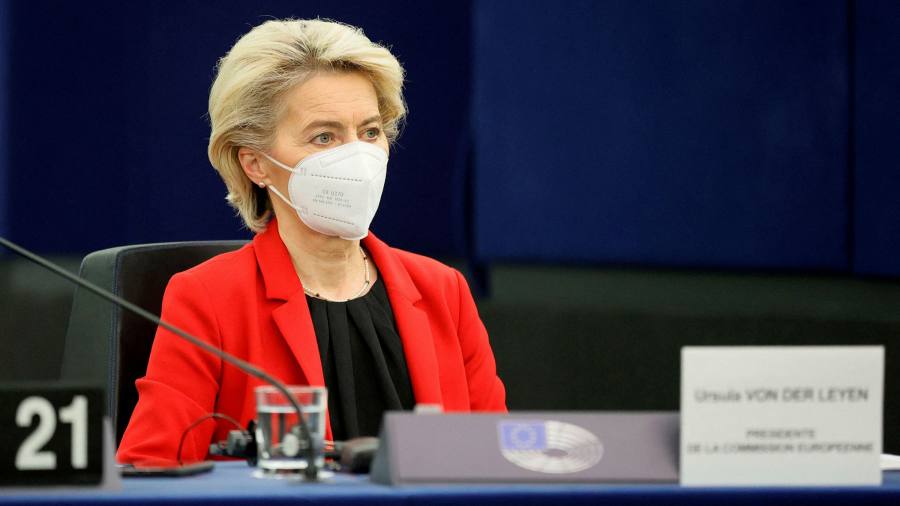 The European Commission will take steps to punish Poland for challenging the supremacy of EU law, its head has vowed as she condemned Warsaw for “calling into question the foundations of the European Union”.

Ursula von der Leyen, commission president, said on Tuesday that Brussels would use one of three tools to hit back at Poland, ranging from a legal challenge, to a formal sanction that could withhold tens of billions of euros in EU funds, and a political process that has the power to strip the country of bloc membership rights.

“We cannot and we will not allow our common values to be put at risk. The Commission will act,” von der Leyen told the European parliament, as Poland’s prime minister sat in the chamber looking on. “This ruling . . . is a direct challenge to the unity of the European legal order.”

Brussels is under increasing pressure from European lawmakers and some member states to harden its stance against Poland and punish the country’s government for a court ruling this month that declared parts of EU law were not compatible with the Polish constitution.

That ruling significantly escalated a five-year-long struggle between Brussels and Warsaw over rule of law concerns, related to sweeping judicial reforms by the ruling Law and Justice (PiS) party that have included an attempt to purge the Supreme Court, and the introduction of a disciplinary regime that allows judges to be punished for the content of their rulings.

Addressing a debate devoted to the Polish crisis, von der Leyen said the commission was “carefully assessing” the ruling, adding: “But I can already tell you: I am deeply concerned.”

Responding to her with a speech of his own, Polish prime minister Mateusz Morawiecki insisted that European integration had been a “civilisational and strategic choice” for his country, and that his government was part of the “pro-European majority in Poland”.

However, he accused the EU of double standards in its treatment of Warsaw, and dismissed criticism of his government as “unfair and biased”. He also argued that EU institutions had overstepped their powers in trying to force Poland to roll back its reforms.

The debate in Strasbourg, which saw a string of MEPs take the floor to lambast Morawiecki and his government, comes ahead of a European Council summit in Brussels beginning on Thursday where a number of EU leaders are expected to confront the Polish prime minister.

Some member states have demanded the commission initiate a so-called conditionality mechanism that has the power to withhold EU funds — worth tens of billions of euros each year for Poland — if Brussels believes the legal spending of that cash is at risk.

Von der Leyen said this was one of three options on the table. Another, less aggressive move would be a legal challenge to the Warsaw ruling. The final option is the EU’s Article 7 procedure, which allows the bloc to suspend a member’s rights if it believes EU values are being consistently endangered.

“The third option is the Article 7 procedure. This is the powerful tool in the Treaty. And we must come back to it,” she said.

Polish government officials said the commission has misunderstood the court ruling and is both responding to its most extreme interpretation and taking a political approach to a legal issue. “With this approach to the ruling it will be hard to de-escalate,” said one.

Morawiecki told lawmakers: “If the institutions created in the [EU] treaties exceed their powers, member states have to have a tool to respond. The EU is a great achievement of the states in Europe. It is a powerful economic, political and social alliance. It is the strongest, most developed international organisation in history. But the EU is not a state.”