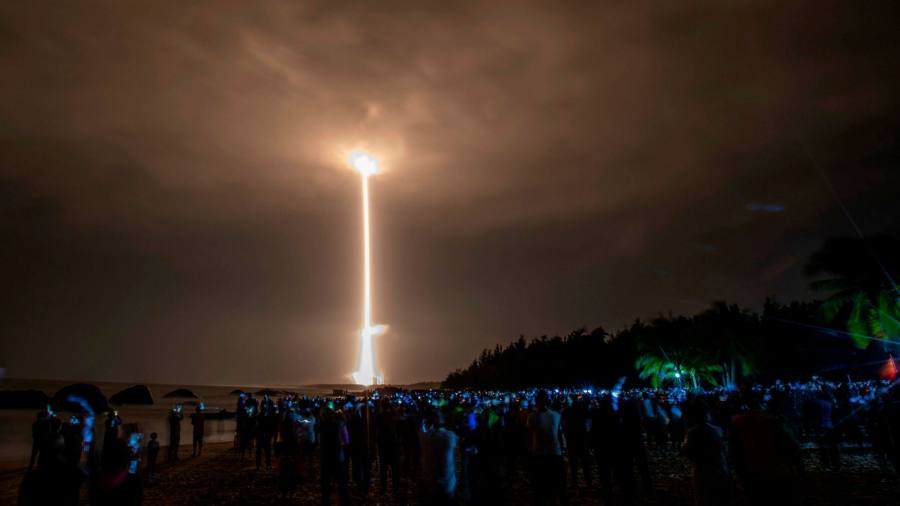 China tested a nuclear-capable hypersonic missile in August that circled the globe before speeding towards its target, demonstrating an advanced space capability that caught US intelligence by surprise.

Five people familiar with the test said the Chinese military launched a rocket that carried a hypersonic glide vehicle which flew through low-orbit space before cruising down towards its target.

The missile missed its target by about two-dozen miles, according to three people briefed on the intelligence. But two said the test showed that China had made astounding progress on hypersonic weapons and was far more advanced than US officials realised.

The test has raised new questions about why the US often underestimated China’s military modernisation.

“We have no idea how they did this,” said a fourth person.

The US, Russia and China are all developing hypersonic weapons, including glide vehicles that are launched into space on a rocket but orbit the earth under their own momentum. They fly at five times the speed of sound, slower than a ballistic missile. But they do not follow the fixed parabolic trajectory of a ballistic missile and are manoeuvrable, making them harder to track.

Taylor Fravel, an expert on Chinese nuclear weapons policy who was unaware of the test, said a hypersonic glide vehicle armed with a nuclear warhead could help China “negate” US missile defence systems which are designed to destroy incoming ballistic missiles.

“Hypersonic glide vehicles . . . fly at lower trajectories and can manoeuvre in flight, which makes them hard to track and destroy,” said Fravel, a professor at the Massachusetts Institute of Technology.

Fravel added that it would be “destabilising” if China fully developed and deployed such a weapon, but he cautioned that a test did not necessarily mean that Beijing would deploy the capability.

Mounting concern about China’s nuclear capabilities comes as Beijing continues to build up its conventional military forces and engages in increasingly assertive military activity near Taiwan.

Tensions between the US and China have risen as the Biden administration has taken a tough tack on Beijing, which has accused Washington of being overly hostile.

US military officials in recent months have warned about China’s growing nuclear capabilities, particularly after the release of satellite imagery that showed it was building more than 200 intercontinental missile silos. China is not bound by any arms-control deals and has been unwilling to engage the US in talks about its nuclear arsenal and policy.

Last month, Frank Kendall, US air force secretary, hinted that Beijing was developing a new weapon. He said China had made huge advances, including the “potential for global strikes . . . from space”. He declined to provide details, but suggested that China was developing something akin to the “Fractional Orbital Bombardment System” that the USSR deployed for part of the Cold War, before abandoning it.

“If you use that kind of an approach, you don’t have to use a traditional ICBM trajectory. It’s a way to avoid defences and missile warning systems,” said Kendall.

Two of the people familiar with the Chinese test said the weapon could, in theory, fly over the South Pole. That would pose a big challenge for the US military because its missiles defence systems are focused on the northern polar route.

The revelation comes as the Biden administration undertakes the Nuclear Posture Review, an analysis of policy and capabilities mandated by Congress that has pitted arms-control advocates against those who believe the US must do more to modernise its nuclear arsenal because of China.

The Pentagon did not comment on the report but expressed concern about China. “We have made clear our concerns about the military capabilities China continues to pursue, capabilities that only increase tensions in the region and beyond,” said John Kirby, spokesperson. “That is one reason why we hold China as our number one pacing challenge.”

The Chinese embassy declined to comment on the test, but Liu Pengyu, spokesperson, said China always pursued a military policy that was “defensive in nature” and its military development did not target any country.

“We don’t have a global strategy and plans of military operations like the US does. And we are not at all interested in having an arms race with other countries,” Liu said. “In contrast, the US has in recent years been fabricating excuses like ‘the China threat’ to justify its arms expansion and development of hypersonic weapons. This has directly intensified arms race in this category and severely undermined global strategic stability.”

One Asian national security official said the Chinese military conducted the test in August. China generally announces the launch of Long March rockets — the type used to launch the hypersonic glide vehicle into orbit — but it conspicuously concealed the August launch.

The security official, and another Chinese security expert close to the People’s Liberation Army, said the weapon was being developed by the China Academy of Aerospace Aerodynamics. CAAA is a research institute under China Aerospace Science and Technology Corporation, the main state-owned firm that makes missile systems and rockets for China’s space programme. Both sources said the hypersonic glide vehicle was launched on a Long March rocket, which is used for the space programme.

The China Academy of Launch Vehicle Technology, which oversees launches, on July 19 said on an official social media account that it had launched a Long March 2C rocket, which it added was the 77th launch of that rocket. On August 24, it announced that it had conducted a 79th flight. But there was no announcement of a 78th launch, which sparked speculation among observers of its space programme about a secret launch. CAAA did not respond to requests for comment.