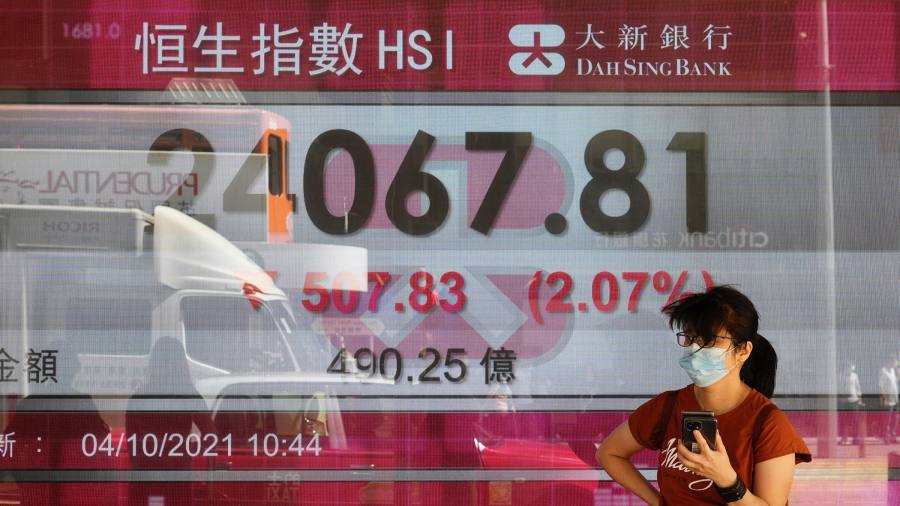 A slide on Wall Street led by losses for Big Tech companies spread to Asia on Tuesday morning, dragging Hong Kong’s tech index to its lowest level in six weeks and hitting equities across the region.

Overnight in the US, the S&P fell 1.3 per cent to its lowest closing price since late July, dragged down by some of the biggest tech companies including Apple, Microsoft and Amazon. Facebook was among the index’s five worst-performers, dropping 4.9 per cent as its main services suffered outages.

Hong Kong’s benchmark Hang Seng index fell as much 1.5 per cent in early trading on Tuesday before recovering to trade flat at midday. The Hang Seng Tech index, which tracks the biggest tech groups listed in the city, dropped up to 2.5 per cent to its lowest level since August 20, when it reached an almost 10-month low.

The tumble in US equities, coupled with concerns about the financial health of China Evergrande after the indebted property developer halted trading in its shares on Monday, pushed equities across Asia to some of the lowest levels in recent months.

Japan’s Topix lost as much as 2.3 per cent in morning trading following Fumio Kishida’s appointment as prime minister on Monday. South Korea’s Kospi fell up to 2.6 per cent on its last close of Friday last week, taking the index to its lowest level since March.

Australia’s S&P/ASX 200 edged down about 1 per cent, having bucked the regional trend of losses in the previous two trading sessions.

Pessimism about tech stocks has mounted in US financial markets in recent weeks on expectations that the Federal Reserve will begin winding back its stimulus support. The tech-heavy Nasdaq Composite was down 7.5 per cent from a record last month after falling 2.1 per cent on Monday.

Facebook shares were hit particularly hard as investors awaited the testimony of a whistleblower at a Senate hearing on Tuesday who has alleged the social media company downplayed the extent of disinformation and harmful mental health effects on its platform.

Oil prices edged up further in Asia trading after hitting seven-year highs on Monday on resistance from Opec and its allies to accelerate output increases despite growing global energy shortages. Brent, the international benchmark, and West Texas Intermediate, the US oil marker, were slightly up while crude futures in Tokyo were up 2 per cent to the highest level in three years.