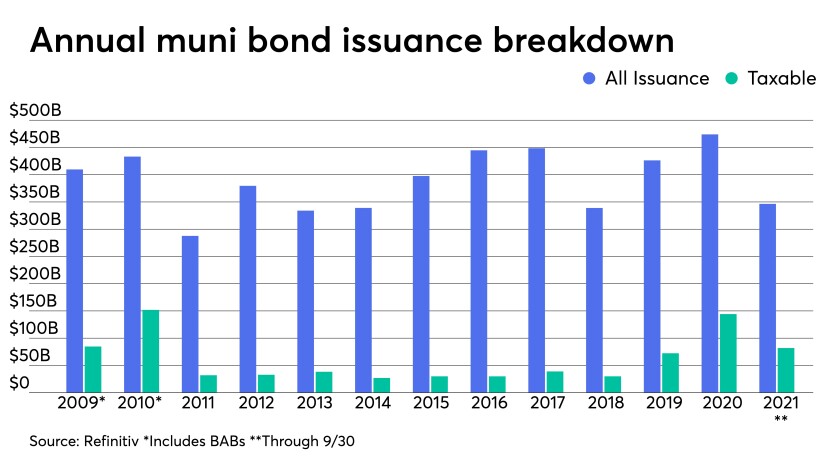 Volume this September, while much lower than 2020, was still above-average on a historical basis, noted Tom Kozlik, head of municipal strategy and credit at HilltopSecurities Inc.

Some analysts predict total issuance will fall short of last year’s $484-billion-plus record as the year has unfolded with unexpected variables such as the infusion of billions of federal coronavirus relief spending and the COVID-19 Delta variant.

Kozlik said his prediction for about $460 billion on the year stands, with expectations of $50 billion to $55 billion in October and around $30 million each in November and December.

The drop in taxables can be attributed to various reasons including volatility and rising rates, which make taxable refundings less viable for issuers.

Another contributor to the decline in taxables this year has to do with available alternatives such as forward-delivery bonds, which have already broken records for issuance, private placements and the issuance of corporate CUSIP debt.

September experienced greater volatility, compounded by some uncertainty around Federal Reserve policy, legislative efforts in Washington and global macroeconomic events, which contributed to some hesitancy in the issuer community.

“There’s been a confluence of circumstances that have really contributed to this volatility. You had the fear of the Chinese contagion over Evergrande, the [Federal Open Market Committee] meeting, this political paralysis taking place in Washington over the debt ceiling and infrastructure package is still being debated,” said Jeff Lipton, managing director of credit research at Oppenheimer Inc. “So that’s going to all contribute to issuance patterns through the balance of the year.”

Because rates have backed up to end the month, and the market is “falling off of the year-to-date lows in yields, and that’s going to remove a number of the advanced refunding candidates from the calendar,” he said.

But Kozlik noted that because it is unlikely that Washington will pass a massive infrastructure bill that includes municipal-friendly bond provisions in the near future, issuers waiting on the sidelines may “jump in” now before interest rates rise further.

“As long as interest rates stay relatively low, the taxable refunding activity could continue. There could be some issuers that may have been waiting to see if tax-exempt advanced refunding is going to come back,” Kozlik said.