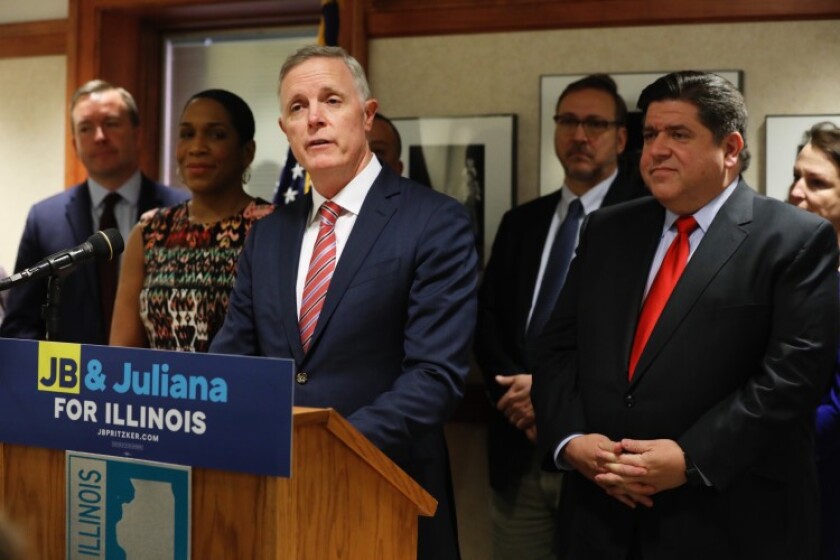 Dan Hynes, the former Illinois deputy governor for budget and the economy, joined Jefferies LLC this month where he will work to elevate the firm’s presence in the state and in the broader Midwest.

Hynes hopes to parlay his public experience “in the trenches” of state government to build on the firm’s Illinois and Midwest presence. The new role marks his first foray into public finance banking.

Hynes, 53, served three terms as the state’s elected comptroller and more recently as a key member of the Gov. J.B. Pritzker’s administration.

“I have relationships that are based on my many years of government” which might lend a sense of “familiarity or trust level with me,” Hynes, who announced his intention to leave state government in June, said in an interview. “But then I think there is also the substantive knowledge-based component which is that they know from the other side of the table I understand what the needs and desires of government issuers and debt managers are.”

In bringing Hynes on board as a vice chairman and managing director, New York-based Jefferies will again have an on-the-ground banking professional in its Chicago office. Jefferies bankers located elsewhere have covered Illinois borrowers for several years.

“Dan’s appointment demonstrates our commitment to the greater Chicago and Midwest region, and his significant experience, perspective and relationships will help to grow our investment banking business. We are thrilled he chose to join Jefferies and look forward to his many contributions,” said Arnone, head of municipal finance.

Hynes will not work on any Illinois government-related issues given the state’s one-year ban on former officials doing such work, but he can work with local governments.

The firm also plans to tap his experience on the corporate side and as a government official sitting on pension boards for advice on what funds are seeking for its asset management group known as Leucadia Asset Management which is part of the Jefferies Financial Group.

Illinois was a “poster child of financial struggle over a couple decades,” Hynes said. “I will quickly add that we made great strides under the Pritzker administration but to be able to tell that story and walk into a room and having been at the center of financial challenges like Illinois has, again, I think gives credibility and a level of trust and knowledge that hopefully will position Jefferies well.”

Pritzker tapped the former state comptroller to serve on his transition team after his 2018 victory over incumbent Bruce Rauner and then asked him to serve as one of his deputy governors with a focus on fiscal issues.

“Dan Hynes returned to state government and shaped the kind of legacy all who work in public service should aspire to: responsible leadership that parses through the distractions of the present with an enduring commitment to truly change our state’s trajectory for the better,” Pritzker said in a statement this week.

Hynes provided a familiar face to the financial community that benefited Pritzker, a political novice. His hiring offered a steady hand that was viewed as much needed by the market after four years of budget and policy battles between Republican Rauner and the General Assembly’s Democratic majorities had left the state’s rating on the verge of junk status.

Hynes, a lawyer, won three terms as state comptroller beginning in 1998 but did not seek a fourth term. He ran for governor in 2010 but lost the Democratic primary to incumbent Pat Quinn. Before returning to the state after Pritzker’s 2018 election, he held private sector positions at Foster & Foster Actuaries and Consultants, Ariel Investments, and UBS Global Asset Management.

Hynes said his intention was to leave within a two to three years. He left as the state had gained ground with positive rating momentum seen in upgrades from Moody’s Investors Service and S&P Global Ratings. Fitch Ratings shifted the state’s outlook to positive. The state’s primary and secondary spreads in secondary bond markets are also at lows not seen in years.

Infusions of billions in federal coronavirus relief aid helped win the upgrades along with improving tax collections, but so too did the administration’s fiscal management through the COVID-19 pandemic and passage of budgets that held the line on spending. The state’s $141 billion pension tab remains the most burdensome pressure going forward on the state’s ratings.

“I feel proud and very confident that Illinois has not only turned a corner but has shown we have the right leadership in place, a strong fiscal foundation and a plan in place to improve its finances,” Hynes said.

Some market participants worried the state could suffer a cut to junk, first when the administration pitched a reamoritization of the pension funding schedule along with a pension obligation bond. The state dropped that proposal after April 2019 revenues came in stronger than expected.

Again, the market worried as the pandemic accelerated and voters shot down in November 2020 Pritzker’s constitutional amendment to move to a progressive income tax structure. Improving federal aid prospects and rising tax collections soon tamped down those concerns.

Hynes said he never worried and he credits the finance team —budget director Alexis Sturm and capital markets director Paul Chatalas as well as Chatalas’ predecessor Kelly Hutchinson — with being “very, very good about communicating with the rating agencies.”

In planning his next move, Hynes said the financial sector was his first choice although he did talk to private equity, commercial banks, technology and real estate firms.

“It was pretty clear Jefferies was the right fit early on” after discussing the role and interviewing with senior executives, Hynes said. “It’s a highly respected firm, a very globally recognized firm for expertise in investment banking and municipal finance but at the same time even though it’s globally recognized I do think there’s some upside opportunity to give greater familiarity with it in the Midwest and in Chicago.”