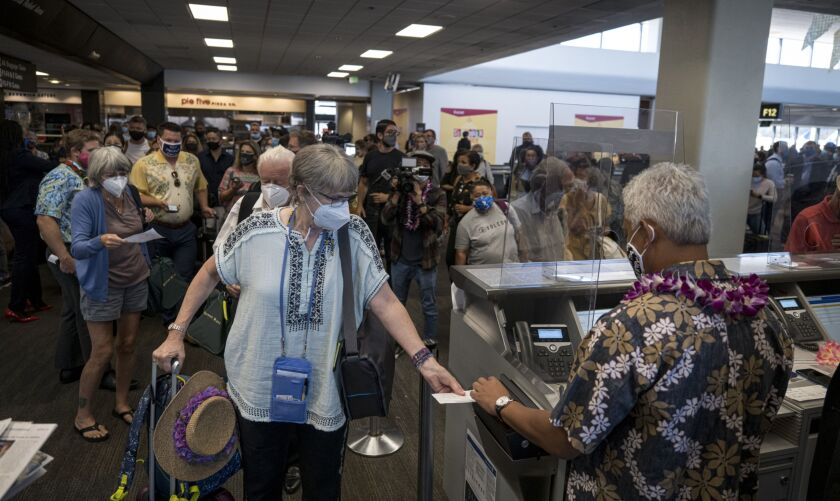 “The state has significantly rebounded from when we put it on negative outlook, reflecting last year’s budgetary and economic pressures,” S&P credit analyst Oscar Padilla said. “The state was able to manage through some difficult times in the past 18 months.”

The coronavirus pandemic crushed Hawaii’s largely visitor-based economy in 2020, but the tourism industry recovered strongly this year, until the Delta variant of COVID-19 complicated matters in late summer.

According to one closely watched metric, the daily visitor dashboard maintained by the Department of Business, Economic Development & Tourism, arrivals into Hawaii’s airports in July averaged 32,447 daily.

That’s down 11.6% from July 2019, before the pandemic, but arrivals from the other 49 states were up 11.8%. International arrivals, weighed down by COVID-19 travel restrictions, were down almost 93%.

But Delta hit Hawaii hard this summer, filling its hospitals and ICUs, leading Gov. David Ige in August to make a public plea to tourists to stay away from Hawaii for a while.

Many listened; through Tuesday, arrivals have averaged 20,251 per day, off almost 28% from the same period two years earlier.
The proceeds from the $600 million taxable 2021 GD series will finance various public improvement projects; the remaining $1.3 billion in taxable GOs will be sold in six series to refund existing bonds, according to Fitch.

BofA Securities leads a five-bank syndicate that will price the bonds. PFM is municipal advisor and Kutak Rock is bond counsel.

The deal is scheduled to price Wednesday, according to a Sept. 3 post on the Municipal Securities Rulemaking Board’s EMMA disclosure website.

S&P analysts also said they are keeping an eye on the state’s aging population and limited population growth.

“Though we see longer term pressures, the state is stable for AA-plus,” Padilla said. “Structural things can change longer term, and we are keeping an eye on that. But that is true for other states where we see an aging workforce and growing elderly population.”

Hawaii’s population growth trails the nation. Its 2021 growth estimates, according to IHS Markit, are flat through 2023 in contrast to the national average growth of 0.5%, data S&P included in its report.

During the past 10 years Hawaii’s population compound annual growth rate increased 0.31% per year, on average, versus 0.63% for the nation.

The state’s age-dependency ratio increased to 67.3% from 58.4% in 2021, higher than the nation as a whole, which has a ratio of 63.1%. IHS estimates that Hawaii’s aging, 65-plus population represents a growing 18.4% of its total population in 2019, which was among the highest proportions of the elderly among all the states. This proportion is expected to increase to 20% by 2025, ranking Hawaii near the fifth-most aged state in the country, according to S&P.

Should the state’s population growth continue to fall behind the rest of the country, S&P analysts wrote, they would likely revise their assessment of its overall economic score to weaker levels.

As for the risk from natural disasters, Padilla said S&P has seen evidence that the state is managing those risks by maintaining a solid reserve balance and in how it plans infrastructure.

For instance, the Oahu Destination Management Plan that was recently implemented takes climate change into account. It does things like making sure that when roads are constructed, they are built above expected sea level rise, he said.

Ige announced Wednesday that the state had dedicated $601.9 million to capital improvement projects for critical public infrastructure from April through August.

“As we continue to confront the challenges of COVID-19, we want to ensure that Hawaii has the resources to fill critical needs, as well as support opportunities and conservation efforts,” Ige said in a statement.

The state had initially planned to quit prefunding other-post employment benefits in fiscal 2021 to protect the budget against COVID-19 costs, but with the federal relief covering those costs actually ended up prefunding OPEB at higher levels than planned, Padilla said.

Those efforts “demonstrated a serious commitment to supporting their OPEB trust fund,” Padilla said. “It demonstrates from a budget perspective that in the face of all the challenges, they were willing to continue their progress in filling the OPEB trust fund.

Moody’s analysts said its outlook revision to positive “reflects a significant turnaround in the state’s economic and financial position.”

Moody’s downgraded the state to Aa2 from Aa1 in August 2020 and revised the outlook from negative to stable ahead of the state’s $900 million GO sale of taxable GOs citing the drop in tourism amid the coronavirus pandemic.

The state had previously set a target to increase its annual contributions in order to fully fund its OPEB liability over roughly the next two decades but reverted to pay-go funding due to budget challenges stemming from the pandemic. But with the federal relief windfall and recovery in tourism, it continued its retiree healthcare prefunding efforts instead of deferring it for budget savings and made substantial additional contributions to reserves, according to the rating agencies.

“While we believe the state remains susceptible to evolving pandemic-related pressures in the short-term – most acutely to its broad leisure and hospitality sector – its economic recovery to date, has strengthened sufficiently to offer Hawaii a more predictable budgetary planning backdrop to achieve lasting structural balance in the future,” Padilla said.

GO bond authorizations require a majority vote of the legislature, and each year the state’s GO authorization bill determines the aggregate amount of GO bonds that may be issued to finance capital improvement projects, according to S&P’s report. The bill also provides a calculation to ensure that the total amount of debt service payments required will not cause the state to exceed its debt limit of 18.5% of the average of the preceding three years’ general fund revenues.

“Hawaii’s debt ratios, as of June 30, 2020, on a per capita and percentage basis were high, in our view, with direct state debt (including GO and highway debt) approximately $7.3 billion, or $5,171 per capita, 8.5% of total state personal income, and 8.1% of state GDP, which ranks among the highest of all the U.S. states,” S&P analysts wrote. “In our view, Hawaii’s high per capita debt reflects its capital finance responsibilities for many functions that, in other states, are generally financed by local governments, including education, health and welfare.”

Debt amortization, however, is rapid, with 67% of principal repaid within 10 years, S&P wrote.

“Total annual tax-supported debt service (GO bonds, appropriation-backed debt, and the state highway fund) equaled $901 million in fiscal 2020, or about 11.2% of the expenditures from the general and state highway funds, which we consider high,” S&P analysts wrote.