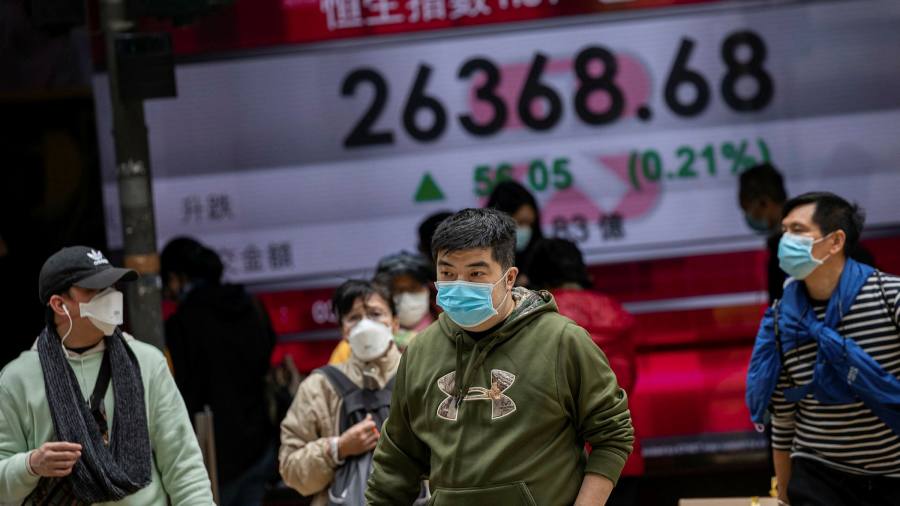 Chinese markets fell on their first day of trading this week after a public holiday as concerns built in global markets over a possible default by property developer Evergrande on an international bond repayment.

But the losses were not as heavy as feared after the real estate company, which has total liabilities of more than $300bn, said it would meet an interest payment deadline for an onshore renminbi-denominated bond.

The news buoyed futures for Chinese stocks moments before the starting bell, with the benchmark CSI 300 index recovering from an initial dip of almost 2 per cent to be down about 1.3 per cent in morning trading. The CSI 300 Real Estate index rose 5 per cent.

Evergrande said that it would pay Rmb232m ($35.8m) in interest on the onshore bond maturing in 2025. But the company did not comment on whether it would meet an $83.5m payment also due on Thursday for an offshore, dollar-denominated note that matures next year. That bond was trading at about 26 cents on the dollar on Wednesday, reflecting expectations of imminent default.

Concern that the company will default on the offshore bond sparked broader tumult in global markets this week, with Wall Street on Monday suffering its worst trading day since May.

Shares rose elsewhere in Asia on Wednesday on hopes that Evergrande might reach a similar arrangement with its international bondholders.

Futures for the S&P 500 swung from a loss to a gain following the onshore bond deal’s announcement, while Tokyo’s benchmark Topix pulled back from a sharper drop to be down 0.6 per cent in what traders called a wave of “cautious relief”.

Analysts attributed the limited falls for Chinese shares to onshore investors having more time to digest developments around Evergrande, with the last-minute reassurance softening concerns of a default.

“The latest announcement just proves Evergrande and the government’s efforts to stabilise the situation and prevent defaults,” said Bruce Pang, head of research at investment bank China Renaissance. He added that Beijing was much more concerned about onshore defaults and could force issuers and domestic bondholders to negotiate an agreement.

“The government has a greater say on developments with onshore bonds — they can streamline arrangements [with bondholders] and work out payments much more easily than with offshore bonds,” Pang said.

Traders said Evergrande was still likely to miss the Thursday deadline for the payment on the offshore bond, but the company might seek to avoid a formal default with offshore bondholders during a 30-day grace period following the payment deadline.

“They probably will negotiate,” said one investor in Chinese debt of the developer, adding that Evergrande could “still try for a soft landing but negotiate . . . [the] same way as they are with the onshore coupon”.

Traders in Tokyo said that despite encouraging headlines from China, shares were unlikely to make greater gains while uncertainty over Evergrande’s fate continued and the fate of coupon payments on the offshore bond remained unknown.

Markets in Hong Kong, where Evergrande shares fell as much as 7 per cent on Tuesday before paring losses to close down 0.5 per cent, were closed for a public holiday.