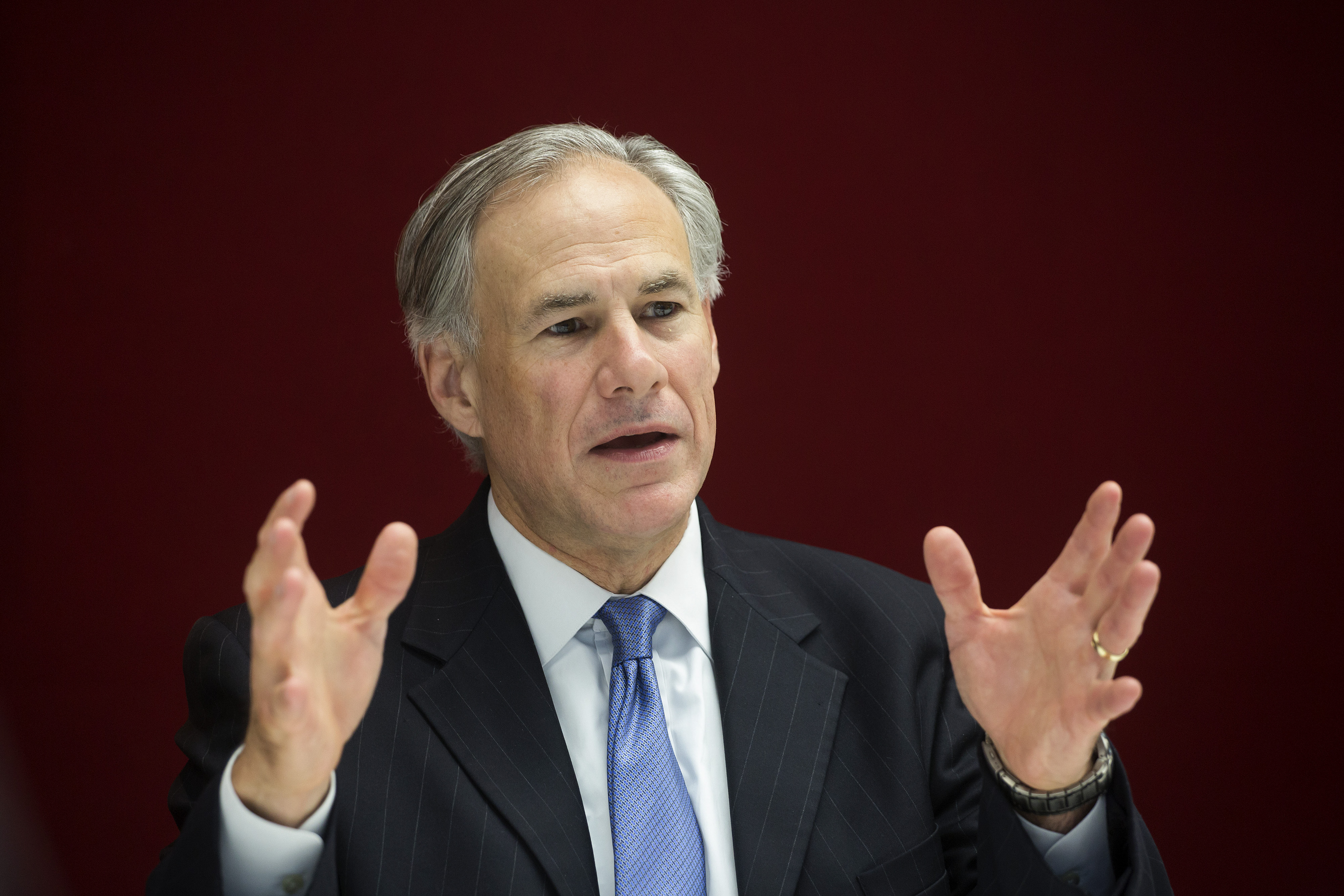 Texas Republican leaders have taken their battle with the federal government to a level not seen since desegregation.

Leading the opposition to President Joe Biden is Texas Gov. Greg Abbott, a candidate for re-election rolling in campaign contributions and bristling with hostility to Democratic policy positions.

Just two weeks before a crippling freeze shut down Texas power plants, leaving millions of Texans in the dark, Abbott issued a declaration in January calling for widespread resistance to federal regulation of the energy industry.

Abbott’s Jan. 28 order required “every state agency to use all lawful powers and tools to challenge any federal action that threatens the continued strength, vitality, and independence of the energy industry. Each state agency should work to identify potential litigation, notice-and-comment opportunities, and any other means of preventing federal overreach within the law.”

After the catastrophic failure, Abbott laid the blame for the event at the feet of the renewable power providers often championed by Biden and the Democrats, even though it was natural gas-powered plants that shut down.

To protect the state’s main power grid, Texas lawmakers decided to tap the state’s rainy day fund and provide millions of dollars to cover the record price of power during the week-long event.

After Abbott forced passage of voting restrictions under the name of voter “integrity,” Biden and others challenged the move as an attempt to limit minority voting.

Texas Democratic lawmakers, who fled the state to prevent the voting restrictions, ultimately failed. Democrats noted that Republican lawmakers advocated the measure as insuring voter “purity,” a phrase that echoed rhetoric of the era of Jim Crow laws in the South.

The League of United Latin American Citizens joined others in the court fight against the new voting rules in the wake of the highest voter turnout in history.

“Rather than celebrate this record-setting turnout and apply these innovations to remedy Texas’s historic suppression of minority voters, the Texas Legislature has instead chosen to write the latest chapter in the State’s long, troubling history of discrimination and disenfranchisement,” according to the LULAC suit.

Republicans deny that their goal is to prevent minority voting. An unsuccessful attempt to vote led to a five-year prison sentence for a young African-American woman who had a criminal record in Tarrant County. A black man in Houston, Hervis Rogers, 62, faces years in prison for voting last year, nearly 30 years after a burglary conviction.

“It is settled constitutional law that ‘a State may not prohibit any woman from making the ultimate decision to terminate her pregnancy before viability,'” the lawsuit states. “But Texas has done just that.”

Abbott’s opposition to mask mandates and COVID-19 vaccinations has become another high-profile battle.

In a prime-time address last week, Biden said he would bypass Republican state officials seeking to prevent masking of schoolchildren.

“I’m directing the Secretary of Education, an educator himself, to take additional steps to protect our children,” Biden said. “This includes using all of his oversight authorities and legal action, if appropriate, against governors trying to block and intimidate local school officials.”

“If you aren’t going to fight COVID-19, at least get out of the way of everyone else who’s trying,” Biden said.

In August, Abbott and Texas Attorney General Ken Paxton filed a mandamus petition in the 5th Court of Appeals to strike down a mask mandate by Dallas County Judge Clay Jenkins.

“Under Executive Order GA-38, no governmental entity can require or mandate the wearing of masks,” Abbott said in a written statement. “The path forward relies on personal responsibility — not government mandates. The State of Texas will continue to vigorously fight the temporary restraining order to protect the rights and freedoms of all Texans.”

“This isn’t the first time we have dealt with activist characters. It’s deja vu all over again,” Paxton said. “Attention-grabbing judges and mayors have defied executive orders before, when the pandemic first started, and the courts ruled on our side – the law.”

A month earlier, Abbott cited the pandemic as justification for restricting ground transportation of migrants who pose a risk of carrying COVID-19 into Texas communities. Abbott’s order directed the Texas Department of Public Safety to stop any vehicle upon “reasonable suspicion of such violation and reroute such vehicles back to its point of origin or a port of entry.” DPS also has the authority to impound a vehicle that violates the executive order.

“The dramatic rise in unlawful border crossings has also led to a dramatic rise in COVID-19 cases among unlawful migrants who have made their way into our state, and we must do more to protect Texans from this virus and reduce the burden on our communities,” said Abbott who later contracted the virus at a maskless campaign rally. “This executive order will reduce the risk of COVID-19 exposure in our communities.”

U.S. Attorney General Garland told Abbott in a letter that the executive order “violates federal law in numerous respects, and Texas cannot lawfully enforce the Executive Order against any federal official or private parties working with the United States.”

Garland said the U.S. Department of Justice “intends to pursue all appropriate legal remedies to ensure that Texas does not interfere with the functions of the federal government.”

Abbott’s response accused the Biden Administration of “jeopardizing the health and safety of Texans on a daily basis by refusing to follow the law.”

“I will take every available step consistent with the law to fulfill my duty to protect the health and safety of all Texans,” Abbott said.

Abbott’s most ambitious confrontation with Biden may be the Texas governor’s decision to build a wall along the Rio Grande using only state funds and donations.

After Trump’s defeat in 2020, President Biden reversed federal support for building a wall between the two nations.

Trump famously promised on several occasions that Mexico would pay for the wall, but Abbott now says that Texans will.

“While securing the border is the federal government’s responsibility, Texas will not sit idly by as this crisis grows,” Abbott declared in a public statement. “Texas is responding with the most robust and comprehensive border plan the nation has ever seen.”

By Sept. 7, Abbott had raised $54 million in donations, enough to build more than a mile of the anticipated 733-mile wall under recent cost estimates.

During the Trump administration, costs of building the wall ranged from $6 million to $34 million per mile. Before the project was scrapped, Trump managed to erect about 80 miles of new barrier before he left office. Texas had 21 miles of fence and wall.

That would leave Texas on the hook for costs ranging from $4.3 billion to $24 billion under the per-mile estimate. Litigation is likely as some landowners are expected to object to giving up their land and rights to water on the Rio Grande.

Under the higher estimate, Texas could apply its $12 billion Rainy Day Fund to cover half the cost. That could be further leveraged with debt, but legislative approval and a constitutional amendment would be required.

The Texas Facilities Commission on Sept. 3 named Michael Baker International, Inc. and Huitt-Zollars, Joint Venture as the managers of the project, subject to approval by the commissioners.

The Texas Department of Transportation, the state’s top issuers of revenue bonds and general obligation debt, will pay about $25 million to build a nearly 2-mile concrete barrier along the border in Eagle Pass.

With the volunteer contributions included, that would leave the state looking for financing for more than 700 miles of remaining wall. Texas enjoys triple-A credit from four ratings agencies.

Texas and Mexico share 1,254 miles of common border and are joined by 28 international bridges and border crossings, according to the Texas Department of Transportation. That number includes two dams, one hand-drawn ferry, and 25 other crossings that allow commercial, vehicular and pedestrian traffic.

Out of the $1.88 billion allocated for border security under the regular session of the Texas Legislature, about $750 million will go directly toward building the border wall.