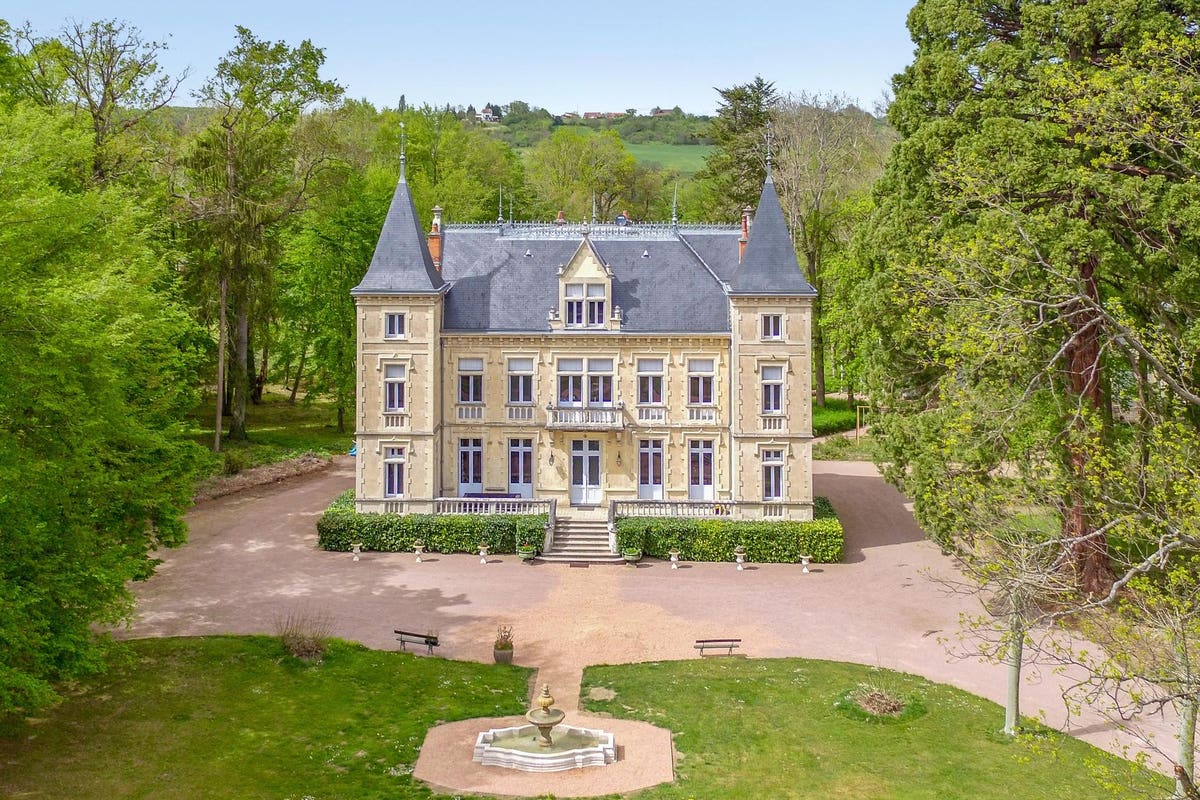 Although the bubbling thermal spas have long been an attraction, it is was the frequent visits of French Emperor Napoleon III that put Vichy, France, on the map in the second half of the 19th century.

It was during this time – characterized by industrial expansion and the rise of Impressionism – that a Neo-Louis XIII-style chateau was built outside of town. Influenced by Italian designs, the architecture recalls styles that were popularized during the reign of King Louis XIII in the 1600s.

The fully renovated chateau today sits on 8 hectares, or 20 acres, of walled grounds with a spring-fed pond, vegetable gardens, an orchard, walking paths, meadows and forest. Also on the property are a caretaker’s apartment, stables, a garage and various outbuildings.

The main residence has a symmetrical façade flanked by towers. A dormer window marks the center of the steep roof.

At the front of the chateau, a raised staircase leads to a foyer with period tile work. A formal dining room adjoins one tower, which contains a smoking room. A chapel occupies the second tower.

The main living room features an ornate marble fireplace and is connected to a family room by a decorative glass door.

The primary bedroom is on the first floor and includes garden access, a dressing room and its own bathroom. There’s also an office with a balcony.

Parquet floors, millwork and ironwork are among details throughout the 420 square meters, or 4,520 square feet, of living space, which includes seven bedrooms and three bathrooms on three levels. The basement rooms include a wine cellar.

Sophie van Cayzeele of Groupe Mercure is the listing agent for the chateau. The asking price is 1.295 million euros or about US $1.54 million.

Shops and restaurants are within 10 kilometers, or 6 miles, of the property.

Vichy is in the Auvergne-Rhône-Alpes region of central France. The resort town is known worldwide for its spas and sparkling mineral water.

Vichy is recognized as an UNESCO World Heritage Site for its elaborate bathhouses and architecture. It is one of the 11 designated Great Spa Towns of Europe.

The international Clermont-Ferrand Auvergne Airport is about an hour away; Paris, about a four-hour drive.

Groupe Mercure is a founding member of Forbes Global Properties, a consumer marketplace and membership network of elite brokerages selling the world’s most luxurious homes.