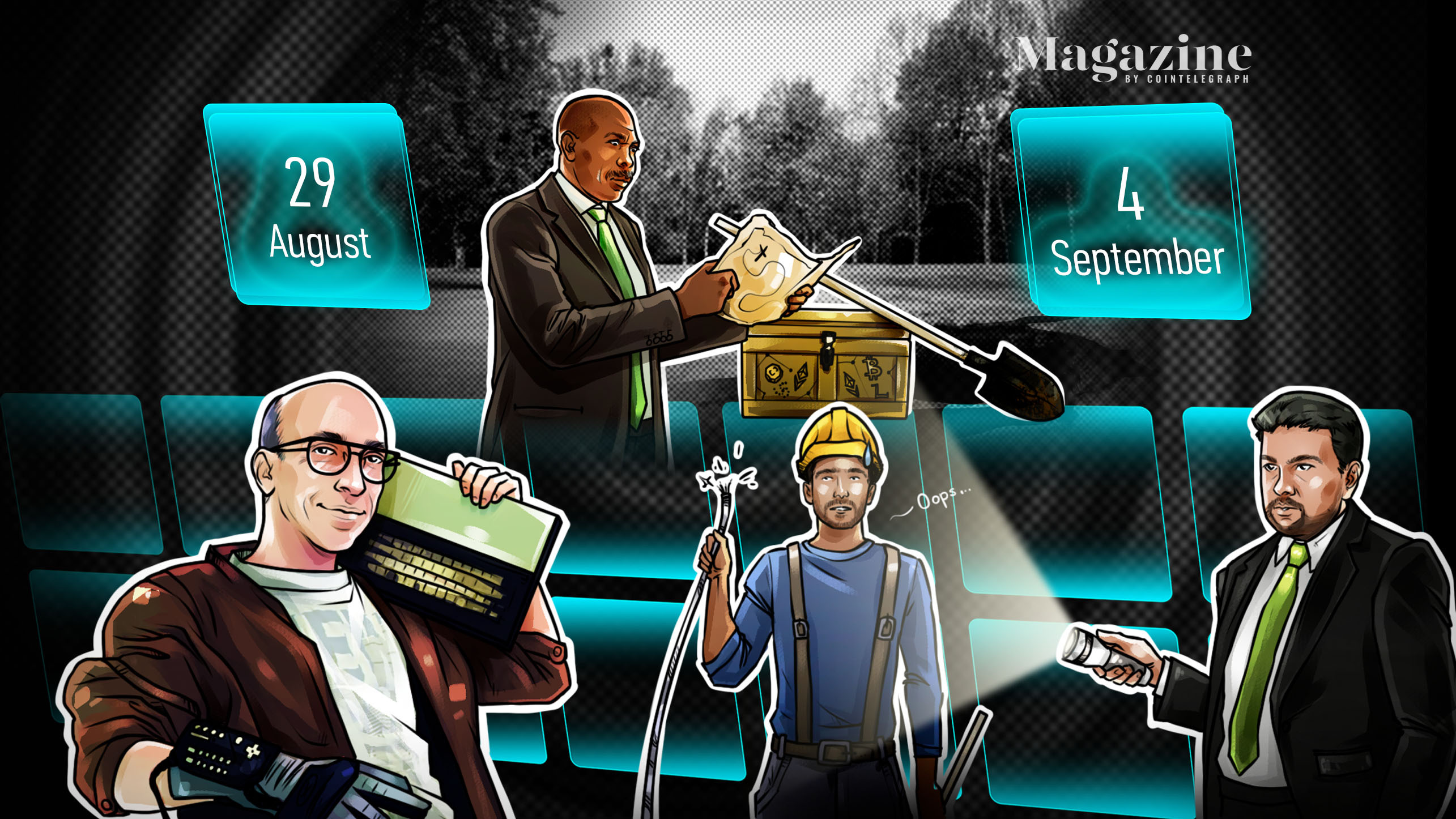 Coming every Saturday, Hodler’s Digest will help you track every single important news story that happened this week. The best (and worst) quotes, adoption and regulation highlights, leading coins, predictions and much more — a week on Cointelegraph in one link.

Central bank digital currencies, or CBDCs,  which some have described as the spawn of Satan, made headlines this week after multiple countries ramped up efforts in developing their own digital money.

On Aug. 30, it was reported that the Central Bank of Nigeria, or CBN, issued preliminary guidelines for its proposed e-naira digital currency. On the following day, news broke that Barbados-based fintech firm Bitt Inc. signed on to work as the technical partner for the CBN’s e-naira rollout.

Singapore is also looking to get in on the action, with the Monetary Authority of Singapore shortlisting 15 “Global CBDC Challenge” participants to help build an in-house retail CBDC.

Apparently, the notion of a peer-to-peer decentralized currency is lost on the elder generation of El Salvador, as local retirees and veterans took to the streets to protest over the adoption of BTC as legal tender.

The anti-Bitcoiners reportedly marched through the capital to express their dismay over fears that the asset would be used for pension payments and cited BTC’s unstable price as a reason for concern.

A Salvadoran news outlet also reported that crypto expert Mario Gómez was arrested by local police without a warrant, with law enforcement seizing his phone and attempting to get a hold of his computer. Gómez has regularly spoken out against the adoption of BTC as currency. However, the police released a statement asserting that the arrest was part of a financial fraud investigation.

El Salvador’s Legislative Assembly also passed legislation for a $150 million Bitcoin Trust this week, supporting the development of crypto infrastructure and services across the country.

The Hollywood Reporter broke the news on Aug. 31, and the deal will see UTA represent Larva Labs’ CryptoPunks, Meebits and Autoglyphs in intellectual property deals for TV, film, video games, licensing and publishing.

The Larva Labs team has shown themselves to be no punks whatsoever, and their OG NFT project has generated a whopping $1.21 billion worth of total sales since its launch in 2017.

Twitter to allow users to add BTC and ETH addresses to profiles, per leaked screenshots

Twitter, the social media platform led by Bitcoin (BTC) maxi Jack Dorsey, is reportedly looking at adding a Bitcoin and Ether (ETH) tipping feature for content creators on the platform.

According to leaked screenshots posted via Twitter on Sept. 3, the latest update is believed to be a part of Twitter’s “Tip Jar” feature and adds to reports from earlier this week that the firm would enable Bitcoin tipping for content creators.

While the reports are unofficial at this stage, Twitter product lead Kayvon Beykpour hinted that there may be an announcement soon when he retweeted a post about the BTC tipping feature on Sept. 1 with the lighting and “soon” arrow emojis.

Binance has been working towards compliance with regulators across the globe following increased scrutiny over the firm in recent months. Binance.US will reportedly close a significant private funding round within the next two months that would enable the firm to operate more independently from the global exchange.

Zhao stated in an interview on Sept. 1 that he is confident that the global crypto exchange can survive the regulatory onslaught and explained that the U.S. branch will move towards an IPO in the next three years.

“Binance.US is just going to do what Coinbase did,” Zhao said.

For more info on crypto prices, make sure to read Cointelegraph’s market analysis.

“Cryptocurrencies, regardless of where they’re trading today, will eventually prove to be worthless. Once the exuberance wears off, or liquidity dries up, they will go to zero. I wouldn’t recommend anyone invest in cryptocurrencies.”

“People will note that derivatives trade more volume in crypto than spot, which is true. But that is true of every asset class in the world.”

“A cryptocurrency is a store of value. It is a medium of exchange, but is not generally accepted. It’s only accepted by those who are participating in it.”

“I like the currency of the United States. I think the others are potentially a disaster waiting to happen. […] They [cryptocurrencies] may be fake. Who knows what they are? They are certainly something that people don’t know very much about.”

“I think the transformation we’re living through right now could be every bit as big as the internet in the 1990s.”

“Cryptocurrencies will play a larger role in Afghanistan […] in the war for and against the Taliban forces.”

“Unauthorized miners are the main culprits behind the power outages in recent months. We would have had 80% less blackouts if miners had halted their activities.”

“We now have probably $650 to $700 million dollars worth of Bitcoin across our product portfolio.”

Prediction of the Week

Bitcoin and Ethereum each run on their own public blockchains, meaning folks can analyze BTC and ETH activity on those networks. On-chain analysis involves trying to make sense of blockchain activity and derive possible conclusions or outcomes.

Glassnode, a blockchain intelligence company, released a report this past week that explores blockchain activity for Bitcoin and Ethereum. The report pointed out a comparison between current activity and activity back in the latter half of 2020 (which ended up in a significant price surge for both assets).

“It is notable that current activity on both chains is similar to the stable pre-bull accumulation range established in mid to late 2020,” the report detailed.

The report also noted that blockchain activity for ETH and BTC is low compared to what it was on both networks when BTC and ETH topped out in price earlier in 2021. Yet, price and “trends in supply dynamics” for both assets tilt bullishly, in contrast to the lessened on-chain activity — basically meaning that further bullishness could lie ahead.

Bitcoin rallied back above $50,000 this week, although throughout Bitcoin’s price history, September has not generally proven to be a particularly bullish month.

FUD of the Week

According to local authorities, a 23-year-old Venezuelan swiped 23.66 BTC, worth around $1.15 million, from investors and then faked his own kidnapping to try and get away with it.

Suspect Andrés Jesús Dos Santos Hernández is believed to have posed as a financial adviser before soliciting BTC from several unlucky investors.

On Aug. 29, Douglas Rico, the director of Venezuela’s Scientific, Criminal and Criminal Investigations Corps, issued a statement asserting that Hernández likely staged the abduction as his clients’ Binance accounts have had a distinct lack of assets since his supposed disappearance.

Crypto meme favorite and notorious Ponzi scheme BitConnect made the headlines this week after the United States Securities and Exchange Commission, or SEC, filed charges against the platform, while former director and promoter Glenn Arcaro pled guilty to separate charges for his involvement with the firm.

The Department of Justice announced on Sept. 1 that Arcaro pled guilty to charges alleging conspiracy to commit wire fraud. Arcaro admitted to earning around $24 million from his fraudulent activities, including misleading investors of the profit-earning potential of BitConnect’s “Trading Bot” and “Volatility Software.” He has been ordered to pay back the full amount to investors.

In a parallel action in the long-running saga, the SEC charged BitConnect, its founder Satish Kumbhani, former director Arcaro, and Future Money Ltd. with running a fraudulent, unregistered securities offering that netted $2 billion between 2017 and 2018.

Reports from Russia surfaced this week that a 34-year-old man from Yaroslavl was found guilty of stealing a crypto mining rig from a friend’s garage. He also admitted in court that he was unable to extract profits from the mining gear as he had no idea how to use it.

Local authorities found the Russian man to be guilty of committing a crime, citing large-scale theft of property and illegal entry. The court slapped him with a three-year suspended sentence along with a probation period of three years.

While the value of most friendships is priceless, it appears that this high-scale crypto criminal was happy to break the bond for a mining rig worth around 1.6 million Russian rubles (nearly $22,000).

The value of a legacy: Hunting down Satoshi’s Bitcoin

Satoshi’s fortune continues to intrigue — here’s what we know about the Bitcoin founder’s role in the early days of the blockchain’s existence and their unmoved BTC holdings.

China mining shock may not be over yet, experts suggest

Despite Bitcoin’s perceived hash rate recovery, analysts noted that the recent 150 EH/s reading was based on a short 24-hour window.

Not Legal Advice… America: The world’s most creative junkie

What the United States needs is tens of billions of dollars, and the state is going to take it from the American crypto community.