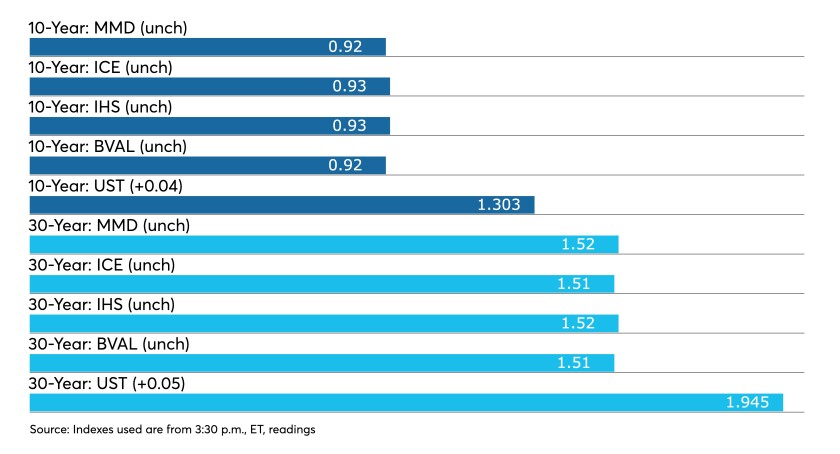 The municipal market was little changed on Friday as a disappointing August jobs number punctuated an otherwise lackluster day of light trading activity ahead of the Labor Day holiday.

Trading fell to a trickle at about $2.1 billion near the close and triple-A benchmarks were unmoved, outperforming a cheaper U.S. Treasury market which saw the 10- and 30-year yield rise four and five basis points, respectively, while equities were mixed.

“Munis are holding up better than their taxable counterparts today, but on track for a down week and a continuation of August themes here in early September,” Anthony Valeri, director of investment management at Zions Wealth Management said Friday.

“Today’s better resilience of munis relative to high-quality taxable bonds shouldn’t offset what looks to be another week of muni underperformance relative to Treasuries,” he said.

Additionally, dealers may be hedging or preparing for next week’s slate of Treasury auctions, he said, pointing to the approximately $133 billion being auctioned in Treasury notes and bills next week.

“The market remains well bid before the holiday,” John Mousseau, president and director of fixed income at Cumberland Advisors said Friday. “Treasuries are off even with a jobs number below expectations as June and July were revised up and unemployment dropped 0.2%.”

“With four months remaining in the year, we remain sanguine on the performance trajectory for munis as we continue to see new-issue supply unable to keep pace with bond redemptions and maturing securities,” said Jeff Lipton, head of municipal credit and market strategy and municipal capital markets at Oppenheimer & Co.

“Although we believe that munis still have the ability to generate positive performance, admittedly such performance could be compromised should technicals become much less constructive and prospects for higher taxes fade considerably, even from currently elevated levels of doubt,” he said.

Refinitiv Lipper reported a slowing down of all inflows this week — albeit still above $1 billion — giving some investors pause.

“Should there be sustained market disruption in the pace and/or direction of municipal fund flows with a market correction of material consequence given the currently low base level of yields, the muni high-yield sector could see a more pronounced widening-out in spreads (perhaps brought about by a credit event),” Lipton added.

“While value can be found with acquiring high-yield securities, high-yield investors should exercise care when seeking alpha, as various credits are being structured with weaker covenants,” Lipton said. “We believe that tightly secured covenants are of particular benefit in a contractionary period whereby revenue disruption could occur.”

Just late last month, Nuveen filed a soft close of two of its high-yield bond funds, which some participants see as a signal that high-yield might be overbaked.

“After careful consideration, Nuveen has decided to soft close all share classes of the Nuveen High Yield Municipal Bond Fund (NHMRX) and Nuveen California High Yield Municipal Bond Fund (NCHRX) to new investors effective September 30th,” a spokesperson said. “Nuveen investment and product teams will closely monitor market conditions and other fund-specific factors and will actively look to reopen the funds when it is deemed to be in the best interest of shareholders.”

The funds will continue to accept purchases from existing shareholders. The firm said it believes regulating asset growth through a soft closing “is currently in the funds’ shareholders best interest.”

Employment report disappoints
“Taper is dead … for now,” said Bryce Doty, senior portfolio manager at Sit Investment Associates, after the employment report came in well short of expectations. “This gives Jay Powell an excuse to push off tapering until his reappointment as Fed Chair in February.”

The report was a key piece of information that could change the Federal Reserve’s timing on making a tapering announcement. Powell has said there needs to be “substantial further progress” on the employment goal before it will cut back on asset purchases.

That time is “still at least a month or two away,” said Fitch Ratings Chief Economist Brian Coulton.

While this probably won’t “alter the Fed’s intention to taper before the end of the year,” said Scott Anderson, chief economist at Bank of the West, “it does probably keep the Fed data dependent at the September FOMC meeting as they await a few more employment reports before going ahead with the reduction in monthly asset purchases.”

“Fed officials were eagerly awaiting this report and now the hawks will need to wait to see more data,” said Ed Moya, senior market analyst for the Americas at OANDA.

Some felt the report would give a clearer picture of how the Delta variant is impacting the economy. But there is no clear agreement on that, either.

“This job data cannot be blamed on the Delta variant,” Doty said.

However, Jack Janasiewicz, senior vice president, portfolio manager and portfolio strategist at Natixis Investment Managers Solutions, said, “it has the Delta variant written all over it.”

Still, not only did Delta have “apparent” impacts on hiring and the economy, said Dana M. Peterson, chief economist at The Conference Board, “Looking forward, the ongoing increase in the number of new infections is likely to lead to another subpar payrolls print in September.”

Economists polled by IFR Markets expected 728,000 jobs to be added in the month.

The upward revisions for July and June “doesn’t make a dent in the disappointing data,” Sit’s Doty said. “There is a near record number of job openings and yet so few jobs” added, he said.

Besides the $300 added unemployment benefits, Doty said, “Once people have gotten a taste for working remotely, it’s hard to give that up and employers’ requiring people to come back into the office has fueled a wave of resignations, creating a headwind for job growth.”

Despite the lower-than-expected read, Fitch’s Coulton said, nonfarm payrolls have grown an average of 750,000 in the past three months, and “the level of employment is now only 3.5% below pre-virus levels.”

Noting leisure and hospitality, which had been hiring, saw a “halt in job growth” this month, might suggest “an impact from the surge in virus cases on the pace of reopening.”

“Wage growth was another bright spot,” he said, “and shows that employees have bargaining power against employers.”

Average hourly earnings grew 0.6% in August, after a 0.4% gain in July. But average weekly hours remained at 34.7 “and will need to be monitored,” Samana said.

The labor participation rate holding at 61.7% “will disappoint Fed hawks that were looking to claim further that the labor market recovery is now delivering further substantial progress,” OANDA’s Moya said.

Also released Friday, the Institute for Supply Management’s services survey showed growth was slower than in July, while prices remained high, but softened and employment was growing at a steady pace.

The Dublin USD, California is set to sell $116 million of general obligation bonds at 12:30 p.m. eastern on Thursday.