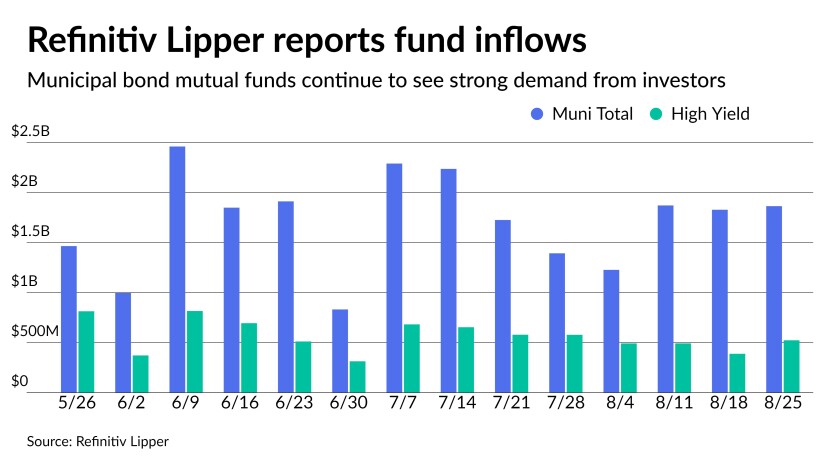 Weakness moved out the yield curve Thursday as secondary bid-wanteds were still elevated while U.S. Treasuries pared earlier losses and equities sold off in the afternoon as news out of Afghanistan grew worse.

For the 25th straight week, Refinitiv Lipper reported inflows into municipal bond funds. Investors put $1.9 billion of cash into the mutual funds, with high-yield seeing $524 million of that amount.

After a few sessions of a more active secondary market with larger-than-average totals of bonds out for the bid — $725.37 million Wednesday and $708 million Tuesday — activity slowed into the afternoon Thursday with par value traded at just over $5 billion versus $10 billion Wednesday.

The focus turned away from the few deals priced in the primary and to Jerome Powell’s speech in Jackson Hole following hawkish comments from two Fed presidents on tapering.

“What started as a modest increase in secondary bid list volume has become a more concentrated effort among a broader range of sellers as month-end approaches,” said Kim Olsan, senior vice president at FHN Financial. “End-of-month positioning is partially in play, but perhaps there’s also a sense that rates are more inclined to be nudged higher with limited opportunity to move much lower for the front third of the curve.”

Triple-A benchmarks were cut one to two basis points, the larger of which was outside of 10 years. Ratios were little changed with the 10-year muni-to-Treasury ratio at 68% and the 30-year at 78%, according to Refinitiv MMD. The 10-year muni-to-Treasury ratio was at 69% while the 30-year was at 77%, according to ICE Data Services.

The four-week moving average remained positive at $1.699 billion, after being in the green at $1.581 billion in the previous week.

In late trading, Treasuries were steady as equities were weaker.

Warm up
While Friday’s speech by Federal Reserve Board Chair Jerome Powell is the highlight of the Jackson Hole symposium, two Federal Reserve Bank presidents on Thursday renewed the call for tapering in televised interviews.

Kansas City Fed President Esther George said the panel should begin tapering its asset purchases “sooner rather than later” this year despite the issues the Delta variant may cause.

“I don’t think [the rise of the Delta variant] changes my own calculus that it is time to begin to make those adjustments, given the gains we have seen so far,” she said during an interview on Bloomberg TV.

The key, she said, was “to get started,” with details — including about exact start date and pace — less important.

Separately, Federal Reserve Bank of St. Louis president James Bullard told CNBC the asset purchases are no longer necessary, and he expects the Federal Open market Committee will agree on a wind-down plan, although he did not provide a timeline. “It does seem that we are coalescing around a plan.”

Powell seems to be less eager to begin tapering, although since the meeting and his semiannual monetary report to Congress, a strong employment report was released. At that time, the chair still believed the employment goal was “a ways away.”

Members of the Fed seem to be divided among those who are ready to taper now, those who want to see one more good employment report, and those looking for two more big gains in nonfarm payrolls before cutting back asset purchases.

The market will be keyed on Powell’s speech to see if his stance has changed and if he gives any definitions, timeline or hints about “substantial further progress” toward its employment goal.

George also spoke to Fox Business, where she said the baseline outlook is for more jobs and strong economic growth, adding Delta may trim employment gains, but it shouldn’t “derail the economy.”

Indeed, the preliminary second quarter gross domestic product read showed 6.6% growth in the three month period, better than the 6.5% gain in the advance read and the 6.3% climb in the first quarter.

“There were no surprises in today’s release but merely a reminder that the economy is recovering robustly from the economic disruptions of last year,” said Matt Peron, director of research at Janus Henderson Investors.

Corporate profits were at record levels in the period, they noted. “Wide profit margins suggest that businesses may have the ability to avoid passing on all cost increases to customers.”

“The pandemic has demonstrated that few things move in a straight line and the latest snapshot of jobless claims is consistent with that,” said Bankrate Senior Economic Analyst Mark Hamrick. “The nation’s unemployment rate has dropped significantly from last year’s peak and may be poised to move lower.”

The four-week moving average fell to 366,500, a pandemic low, in the week ended Aug. 21 from 378,000 a week earlier. This suggests “the labor market continues to gradually recover,” said Scott Anderson, chief economist at Bank of the West.