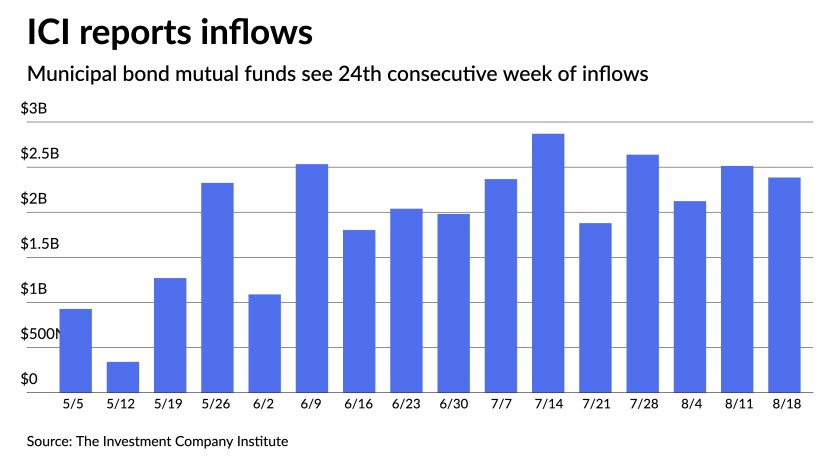 Municipals faced some pressure and benchmark yield curves were cut by one to two basis points Wednesday. Municipals largely have shrugged off a weaker U.S. Treasury market and outperformed while mutual funds saw another $2 billion-plus week of inflows.

The 10- and 30-year UST have risen nine basis points since Monday, while munis have only inched up one basis point on the 10-year and one to two total on the short end after more than a week of steadiness.

“After months of low yields and credit compression some sellers emerged to take advantage of the low rates well below 1% in the short end and the belly,” said Peter Franks, Refinitiv MMD senior market analyst.

There is still a supply/demand imbalance that will keep munis “in decent, if not guarded shape, and the current ratios are on the higher side of their three-month averages in 10- and 30-years,” Franks noted. Several participants noted investors have come to accept, perhaps begrudgingly, where ratios have settled.

Fund flows continue on a tear, with the Investment Company Institute reporting $2.385 billion of inflows into municipal bond mutual funds for the week ending Aug. 18, down from $2.513 billion the week prior.

It marked the 24th week in a row the funds saw inflows, to reach $67 billion of inflows year-to-date.

Exchange-traded funds saw $513 million of inflows after $210 million the week prior and $105 million the last week of July. A slight drop the prior two weeks had some participants on guard that certain investors, such as insurance companies, were backing out some from the product.

Taxable money-fund assets rose by $983.6 million, bringing total net assets to $4.368 trillion. The average, seven-day simple yield for the 761 taxable reporting funds sat at 0.02%, same as the prior week.

Don’t expect much from Jackson Hole
While last year’s Jackson Hole symposium provided news about the Federal Reserve’s switch to an inflation average monetary policy, don’t expect “any breaking insights into the Fed’s outlook for the economy, inflation, or the Fed’s conduct of monetary policy,” said Berenberg chief economist for the U.S., Americas and Asia Mickey Levy, a member of the Shadow Open Market Committee.

“Under current circumstances of a solid recovery in labor markets and inflation far above the Fed’s 2% longer-run target, we think it would be appropriate and timely for [Federal Reserve Board Chair Jerome] Powell to provide detail on how and when the Fed will begin to unwind its emergency monetary policies, including tapering its asset purchases and also provide guidelines on the Fed’s plans to normalize interest rates under different scenarios,” he said. “However, it is most likely that Powell’s speech will stick to the Fed’s recent script of tip-toeing toward tapering and disassociating the unwinding of its asset purchases from the eventual liftoff of rates.”

While Powell will likely have an “upbeat” economic outlook, it will be tempered by concern about the Delta variant of COVID-19, which could “temporarily dampen near-term activity,” Levy said.

Powell could acknowledge the improvement in the labor markets and may say that the substantial further progress term was met with the July employment numbers, he added, and an announcement on tapering could be forthcoming “if everything goes well,” but won’t offer a timeline.

“Powell is also likely to repeat recent guidance that the timing of the tapering will not imply anything about when the Fed will begin raising the Fed funds rate, which has been anchored to zero since March 2020,” Levy said.

A taper announcement is expected by Levy at the September or November Federal Open Market Committee meeting, with tapering beginning by year end. “The Fed may delay this unwinding if the Delta variant transmission continues to spike and rise and dampen economic growth more than expected,” he said.

Craig Erlam, senior market analyst, UK & EMEA, at OANDA, agreed. “Frankly, I wouldn’t be surprised if this turns out to be one big anticlimax, with Powell saying very little of note and instead insisting that the data will dictate any decisions in the upcoming meetings.”

And others also see the taper announcement coming after Jackson Hole. “The September FOMC meeting might be a good time to announce a taper starting in November, unless the August employment report is a dud,” said Joe Kalish, chief global macro strategist at Ned Davis Research (NDR).

Hear more of Joe’s thoughts on this Bond Buyer podcast.

NDR expects the Fed to cut its Treasury purchases by $10 billion each month and mortgage-backeds by $5 billion, meaning tapering would be done in eight months, but could be adjusted if either the labor or inflation picture changes.

“Powell will need to emphasize that the bar for raising rates is higher than it is for tapering,” Kalish said, “and that rate hikes do not automatically follow the completion of tapering.”

By discussing tapering, the Fed averted a possible taper tantrum, said John Vail, chief global strategist at Nikko Asset Management. “No one is expecting much new information during the conference.”

With vaccines available, shutdowns become less likely, he said. “Already, many zero-tolerance countries are realizing such cannot continue and more are adapting to a ‘living with COVID’ theme, (much as what Japan has been doing) concentrating on preventing the most risky aspects,” he said.

Wilmington Trust says the November meeting “seems more plausible” for a taper announcement, says CIO Tony Roth, “as it would provide more time for the Fed to assess progress on the labor market and the impact of the Delta variant (both of which still have potential to change the timing of the Fed’s taper timing.”

Indeed, Federal Reserve Bank of Dallas President Robert Kaplan, an early proponent of the need to taper, last week said if the Delta variant continues to slow the economy he could change his mind about a September announcement, Roth said.

The lone indicator released Wednesday, durable goods orders slipped 0.1% in July after a revised 0.8% gain in June, first reported as a 0.9% increase.

“This is only the second time since the initial reopening of the economy in May of last year that durable goods orders posted a decline,” noted Wells Fargo Securities Senior Economist Tim Quinlan and Economist Shannon Seery. “The scant 0.1% dip in orders for durable goods is remarkable after accounting for the fact that civilian aircraft orders fell by about half during the month.”

Core capital goods orders were unchanged in the month, “but the run-up in goods consumption during the pandemic has resulted in a speedy rebound in orders to date.”

Grant Thornton Chief Economist Diane Swonk agreed. “Durable goods orders and shipments suggest that manufacturers are beginning the long, arduous process of replenishing empty shelves,” she said. “How long that takes and what it means for inflation has been complicated by the Delta variant. Higher prices and an end to stimulus checks are also taking a toll on demand.”