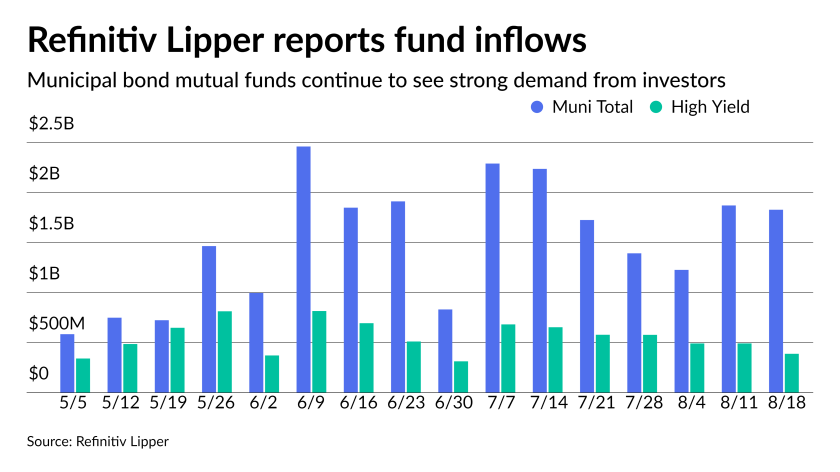 The tax-exempt market languished through a quiet summer Friday as municipals finished unchanged for the sixth straight trading session.

IHS Ipreo estimates supply for the upcoming week at $7.04 billion. The week’s supply is composed of $5.36 billion of negotiated deals and $1.68 billion of competitive sales. Breaking it down, Refinitiv MMD calculated the tax-exempt total at $5.99 billion and taxables at about $1.04 billion. The week average volume this year has been $6.5 billion.

For the 24th straight week, Refinitiv Lipper reported inflows into municipal bond funds. Investors poured $1.8 billion of cash into the mutual funds in the latest reporting week, with high-yield seeing $389 million of that amount.

On Friday, high-grade bonds on the generic, triple-A scales were steady, according to Refinitiv Municipal Market Data. The benchmark Treasury bond closed at 1.26% in 10 years and 1.88% in 30 years, a 70% and 80% ratio to municipals, respectively.

After such a busy week — with the arrival of four deals sized at over $1 billion each — the market was taking it easy on a quiet and lazy summer Friday, a Minneapolis trader said.

“The market is hanging in there — obviously there’s a lot of cash,” the trader said, adding that many investors are trying to be patient on the sidelines waiting for more supply.

The largest deal of the upcoming week is expected to be a negotiated $600 million sale from the Pennsylvania Turnpike Commission on Tuesday. The biggest competitive sale is a $335 million offering coming from Montgomery County, Md., also on Tuesday.

“You can’t get bonds anywhere, so it’s a little tough with the amount of cash out there,” the trader said.

The secondary market on Friday was “about as dry as it’s been,” he noted. “There are bid-wanteds, but people are fishing for big prices and not necessarily trading stuff because they have too much cash.”

With municipal to Treasury ratios approaching the top range of the year, the higher ratios should help improve secondary market liquidity as dealers have an easier time hedging, according to BofA Securities municipal research strategists Yingchen Li and Ian Rogow.

“History shows that muni mutual funds generally stay positive unless the 10-year AAA rises 50+bps and stays high for more than three months,” the analysts said in a report on market trends on Friday. “Our AAA rates view implies that mutual funds flows should remain steady and positive for the rest of the year.”

Refinitiv Lipper reports $1.8B inflow
In the week ended Aug. 18, weekly reporting tax-exempt mutual funds saw $1.830 billion of inflows, according to Refinitiv Lipper. It followed an inflow of $1.873 billion in the previous week.

The four-week moving average remained positive at $1.581 billion, after being in the green at $1.555 billion in the previous week.

Jackson Hole and tapering
As the Federal Reserve inches closer to a decision on the timing of reducing its asset purchases, analysts say the markets have priced that in and will focus more on actual liftoff.

In the minutes of the July Federal Open Market Committee, released Wednesday, “Most participants noted that, provided that the economy were to evolve broadly as they anticipated, they judged that it could be appropriate to start reducing the pace of asset purchases this year because they saw the Committee’s ‘substantial further progress’ criterion as satisfied with respect to the price-stability goal and as close to being satisfied with respect to the maximum-employment goal.”

“That’s what stood out to me,” said Kevin Flanagan, head of fixed income strategy at WisdomTree. Members basically “agree the inflation goal is met,” he said. “One more good employment report may be enough for the Fed to take the next step at its September meeting.”

While Jackson Hole may be too soon for a taper announcement, Flanagan said, “I’ll be watching whether Fed Chair Jerome Powell shifts his language on the employment goal,” since the minutes are from July and a strong employment report was released since then.

The chair likely will “condition” his remarks to indicate the decision is data dependent. “What he could do,” Flanagan said, “is telegraph a move at the September meeting, couching it by saying, ‘if the data come in as expected, without any shocks from Delta, we could…’”

With the next employment report due the Friday before Labor Day, “it could make for an interesting unofficial end of summer,” he said.

What would surprise Flanagan is any talk of rate hikes.

“They’re going to have to start talking in more concrete terms before tapering,” said Cato Senior Fellow and Director of the Center for Monetary and Financial Alternatives George Selgin. “Jackson Hole will not be a catalyst, but behind the scenes they’ll continue to talk and formulate a plan.”

The Fed should be tapering already, he said. “Those purchases have outlived their purpose of stimulating employment and supporting prices during the COVID-19 crisis,” he said. “The Fed is at risk of exceeding its own goals if it doesn’t act now.”

Inflation will be persistent, Selgin believes. “The unemployment we’re seeing has very little, if anything, to do with lack of aggregate spending. The Fed’s job is to reduce unemployment it can reduce. This isn’t it.”

But the reality is taper will likely be in “early 2022 if not this year,” he said. “The Delta variant has thrown a new wrench in the works, and it could delay, or justify delaying, taper.”

A survey of primary dealers, by the Federal Reserve Bank of New York, cited in the Fed minutes shows they expect “tapering will most likely begin in early 2022, though there is a reasonable chance it will start sooner, perhaps in the fourth quarter of 2021,” noted Peter Ireland, an economics professor at Boston College and member of the Shadow Open Market Committee. “That sounds about right to me.”

The questions, he said, are the timing — this fall or next year — and “will Chair Powell use his speech at Jackson Hole to lay out the details for tapering, or will he just summarize how things have changed and largely improved since last August and then just say that possible decisions on tapering will be the Committee’s focus this fall, starting at their late September meeting.”

While it could go either way, Ireland said, “I lean slightly toward thinking that Powell will won’t give specific tapering details” at Jackson Hole.

His thinking is based on the minutes of the last two meetings. While the July minutes omitted the words “still far from” when talking about the employment goal, the Fed “didn’t add something like ‘coming close to’ or ‘is approaching,’ that would give us more confidence that they are ready to adjust policy.”

That means, “the September employment report and other early-fall data” will determine timing of taper, Ireland said. “And that, in turn, probably means starting in late 2021 — say November or December — or early 2022.”

While the bond market seems ready for taper, Flanagan said, once that’s announce, its “attention could turn to liftoff.” And, he said, the Fed may raise rates as early as the second half of next year. “It’s a different story than a few months ago when projections were no hikes through 2023.”

A better idea for the timing of liftoff, which interests the bond market could come in September, when the Fed releases its new Summary of Economic Projections, or dot plot.

“Liftoff will be more of an issue than taper,” Flanagan said. “A rate hike represents a far different part of an exit strategy.”

Just three dots moving can push the rate hike expectations into 2022. The dots are “a Polaroid of what the Fed thinks at a certain time and while it may not be a great indicator of what will actually happen, the market pays attention to the dots.”

When tapering is complete, it “gives the Fed flexibility to raise rates sooner, if needed,” he said.

Cato’s Selgin believes the Fed “should be contemplating” rate hikes as well. “I think the economy is strong enough to handle less accommodation if the COVID situation doesn’t worsen.”

And taper tantrum shouldn’t be an issue, he said. “The Fed has taken steps so it shouldn’t come as a big surprise.” Also, “the Fed has made better arrangements than last time to avoid a tantrum,” according to Selgin.

A major reason for the taper tantrum last time, was “deficient reserves,” he said, but the Fed recently arranged a standing repo facility, which should offset that concern.