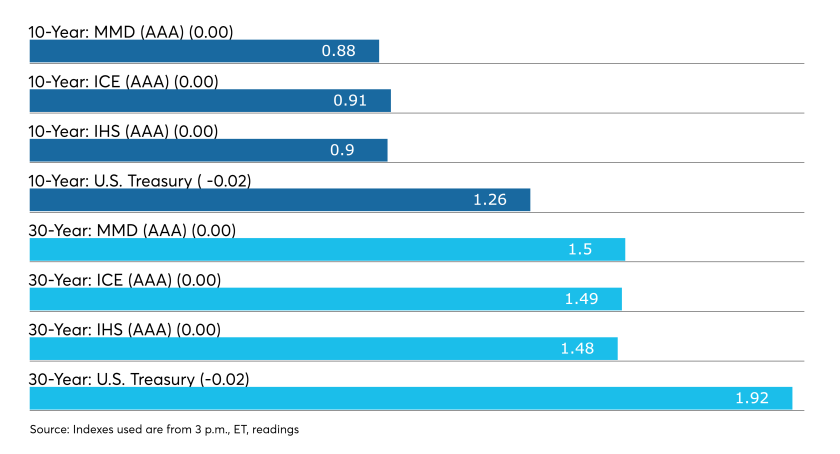 Municipals were steady and relative value increased on the long end of the market amid rising Treasuries Tuesday.

The Puerto Rico Aqueduct and Sewer Authority came to market with over $800 million of bonds as two New York issuers offered large deals to hungry retail investors ahead of Wednesday’s release of the Federal Open Market Committee minutes.

Benchmark triple-A general obligation bonds were unchanged between 2022 and 2051 for the second day in a row, according to Refinitiv Municipal Market Data.

New York City (Aa2/AA/AA-/AA+) opened the second day of its two-day retail order period for its $1.039 billion tax-exempt sale of general obligation bonds, ahead of its institutional pricing Wednesday.

Citigroup took orders for over $200 million of bonds on the first day’s order period Monday.

The deal consists of $950 million of fiscal 2022 Series A and $89.325 million of reoffering exempts. The city is also set to competitively sell $250 million of taxable GOs on Wednesday.

On Tuesday, the short end of the municipal market saw brisk activity, with an abundance of cash available, but with some apprehension keeping investors at bay, according to a New York trader.

“The secondary is firm and unchanged, hanging in there fine,” he said. “I think the international, geopolitical news has caused a little concern for people and the weaker economic data from China makes people pause.”

China released economic data for July that showed slower-than-expected growth as the world’s second-largest economy battled floods and a resurgence of COVID-19.

On the long end of the municipal market, demand is growing as the ratio to Treasuries has increased — to 78% in 30 years Tuesday from an average of 70% in recent months, according to a second New York trader.

“In a quiet, summer doldrum, we are seeing a little bit of life,” he explained.

“It hasn’t been this cheap in a while, so we are seeing some tire-kickers out there paying attention,” he said. “As it’s getting cheaper, we are starting to see customers take a shot at specific 3% and 4% coupons.”

Overall, municipals were sideways and Treasuries were firmer after this week’s U.S. retail sales number was weaker than expected — combined with the international and geopolitical volatility and uncertainty, the first trader noted.

Despite the improving Treasury ratios, he said there was still some “indigestion” on lower investment-grade paper on the long end due to spread compression. “We need more yield to get people engaged,” he said.

But, this week’s $9.6 billion slate of primary deals should pique investors’ interest — especially for the higher-quality, recognizable issuers.

“You have some big billion dollar deals pricing this week and I think investors are feeling content and want to see where these deals clear the market,” he explained, pointing to deals from New York City and the New York Liberty Development Corp.

He said the pricing of those two deals — as well as other larger offerings scheduled for Wednesday, such as the $1.2 billion Miami-Dade County offering — will set the tone for the remainder of the week.

‘Insatiable demand’
Municipal to Treasury ratios continue to hover near historical lows, but this has not stopped inflows, according to Jennifer Eustance, vice president and portfolio strategist at Eaton Vance WaterOak Advisor.

Record flows to the asset class have continued as investors anticipate higher individual taxes, and higher corporate tax rates could also bring banks and insurance companies back into the tax-exempt market, Eustance said.

“Technicals remain very strong as August is expected to be the biggest month of the year for principal/interest payments needing to be reinvested,” she said.

There have been inflows in 64 of the last 65 weeks, which is on track to be the third biggest year for flows, she noted.

“Valuations are rich, but this is the case across most of fixed income right now, so investors are willing to accept these low yields,” she said. “No one seems willing to take on duration risk right now, which is why less than 10 years continues to be the richest.”

Overall, she said credits are strong, as stimulus to state and local governments, state tax receipts remain strong and well above 2019 levels.

She said this scenario could continue — barring a rate increase.

Banks snapping up munis, again
In the second quarter, banks added municipal securities to their portfolios at the fastest rate since at least 2003, according to Municipal Market Analytics Partner Matt Fabian.

This was the eighth-straight quarter of bond portfolios’ increase: over the past two years an aggregate $94.3 billion in muni securities positions have been added across the banking sector.

MMA said it attributes the increase “to the supply surge of taxable rescue financings and other advance refundings over the last 18 months, a shift in banks’ investment policies to grow municipal exposure following the March 2020 selloff and scarcity in yield from alternative traditional and fixed-income investments.”

Banks in California and Texas were the biggest buyers in the second quarter, with both large and mid-sized banks making up the list of top 10 net purchasers.

However, MMA noted new direct loan origination remained flat last quarter, with the total remaining at $197 billion since the second quarter of 2020.

“MMA continues to view the direct loan side, which grew robustly in the first half of 2020, as a regulator of tax-exempt capital markets yields; prepared to write new loans and remove tax-exempt supply should yields rise or the curve see material steepening,” MMA said.

This sector is more concentrated since only 19 banks own 75% of all outstanding direct loans to state and local governments, which means that firm-by-firm decisions can change things quickly. By contrast, the Top 20 bank owners of municipal securities hold 43% of the aggregate industry investment, MMA said.

Economy
The markets remain worried about inflation and the Delta variant and the impact both will have on the economy.

While the timeframe for transitory grows, inflation remains higher than it’s been in decades.

But the Delta variant shouldn’t result in severe economic issues, since in other countries “the wave decline was as quick and steep as its surge,” he said. And with vaccinations available, lockdowns are unlikely.

Economists polled by IFR Markets expected a 0.2% decline for the headline number and a 0.2% increase excluding autos.

“While a slowdown following the reopening spurt in retail sales was inevitable, a big question is the extent to which the Delta variant and higher inflation will weigh on sales, and for how long,” said Berenberg chief economist for the U.S., Americas and Asia Mickey Levy.

The sales control group dropped 1.0% in July. “While consumption of services remains in a strong upward growth trajectory,” he said, “the pace of total consumption is softening.”

Despite the headline number, “the shift to service spending is still underway, and for a time it makes sense to take this bellwether of goods spending with a grain of salt,” said Wells Fargo Senior Economist Tim Quinlan and Economist Shannon Seery.

“Another sharp pullback in auto sales,” based on supply issues, pulled down sales, with the remaining report providing “mixed results.”

They said that “the height of the spending growth is likely past us with early signs suggesting bigger headwinds for spending in August.”

Also released Tuesday, industrial production grew 0.9% in July after a revised 0.2% gain in June, first reported as a 0.4% increase.

Economists expected production to rise 0.5% and capacity use to gain to 75.7%.

The report “offers a glimpse at what factory output might look like if U.S. manufacturers could get their hands on the input components and labor they so desperately need,” said Quinlan and Seery.

While the report was “a step in the right direction,” they said, there’s “a long way to go before supply chains get back to even a semblance of normal.”

Seasonal factors may have played in the gain for auto production, they said, since plants don’t close for retooling as much as they used to, but closed earlier this year because of semiconductor shortages, and “we could get some payback in August.”

Separately, business inventories gained an as-expected 0.8% in June following 0.6% growth in May, initially reported as a 0.5% rise.

Also, builder confidence dropped to its lowest level in a year as the National Association of Home Builders/Wells Fargo Housing Market Index dropped to 75 in August from 80 in July.

Economists expected the level to hold at 80.

“While the demographics and interest for home buying remain solid, higher costs and material access issues have resulted in lower levels of home building and even put a hold on some new home sales,” according to NAHB Chief Economist Robert Dietz. “While these supply-side limitations are holding back the market, our expectation is that production bottlenecks should ease over the coming months and the market should return to more normal conditions.”

The number of employees index rose to 20.3 from 16.8 and wages gained to 47.2 from 41.8. The survey said this showed employment was up moderately, while wage growth was climbing.

In expectations for six months from now, business activity fell almost 12 points to 48.0 and climate dropped 24.4 points to 28.3, suggesting respondents were still optimistic, but less so than a month ago. “Wages and prices were expected to continue to rise significantly, and capital spending plans remained solid,” the report said.

The “signal strength,” or the total number of positive and negative mentions combined, remained elevated compared to three weeks ago.

Seasonally, the index has seen a decline that began in late Spring and extended over the Summer.

Proceeds will be used to fund improvements to the system and refund certain outstanding bonds for savings.

The Aurora, Colorado (/AA+/AA+/) through its Utility Enterprise is set to price on Thursday $266.7 million of taxable first-lien water refunding revenue green bonds. Morgan Stanley is the lead underwriter.