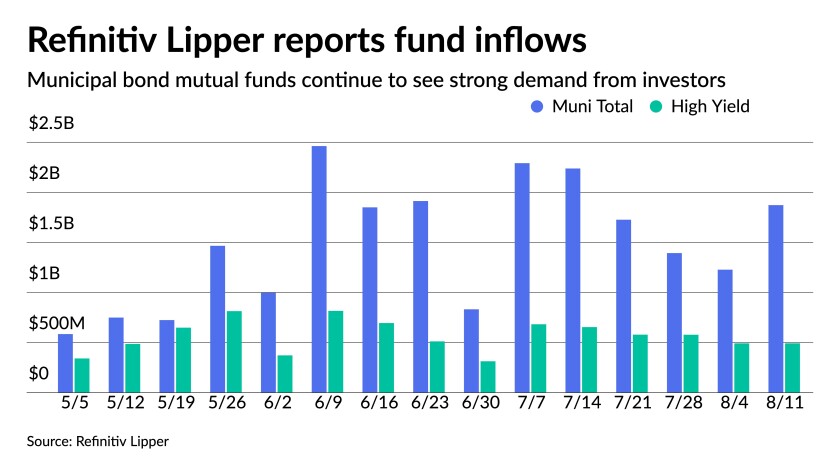 The curve steepening continued Thursday with a steady tone inside 10-years and pressure on bonds outside there forced another session of one to two basis point cuts to benchmark yield curves as U.S. Treasury yields also rose and equities were mixed.

Refinitiv Lipper reported $1.87 billion of inflows into municipal bond mutual funds for the week ending August 11, up from the previous week’s $1.23 billion and the 23rd straight week of positive flows. High-yield saw $493 million of inflows.

Fund flows continue to be a strong demand component for the asset class, but investors are not simply looking for the tax-exempt income.

“My theory is that a lot of the flows into fixed income funds are not necessarily a vote of excitement about bond yields; it’s investors and advisors doing what they’re supposed to be doing by balancing their portfolios,” said Pat Luby.

“Right now we are seeing spikes in mutual funds inflows that are driven not by muni market but driven by equity market,” Luby said.

The fact that equities have done so well in 2021 is part of the reason for the flows into municipal bond mutual funds. It is not just the typical flight-to-safety move; it’s partly that advisors need to move money to keep required percentages of investments allocated correctly between stocks and bonds.

“Over the last 12 months, there is an inverse correlation between outflows out of equity funds into bond funds,” he noted.

That’s not to say that he sees fund flows going negative any time soon. They are still on pace to hit record levels. Only two years had more flows than so far this year: in 2009, the total was $70.4 billion and $93.2 billion in 2019.

So far in 2021, the total sits at nearly $62 billion, per the Investment Company Institute, with four months and change to go.

Refinitiv Lipper reports $1.9B inflow
In the week ended Aug. 11, weekly reporting tax-exempt mutual funds saw $1.873 billion of inflows, according to Refinitiv Lipper. It followed an inflow of $1.228 billion in the previous week.

The four-week moving average remained positive at $1.555 billion, after being in the green at $1.647 billion in the previous week.

Economic indicators
Initial jobless claims fell to 375,000 in the week ended Aug. 7 on a seasonally adjusted basis, from an upwardly revised 387,000 the week before, first reported as 385,000 claims.

Economists polled by IFR Markets estimated 373,000 claims in the week.

Continuing claims decreased to 2.866 million in the week ended July 31, from an upwardly revised 2.980 million in the prior week, initially reported as 2.930 million.

“Welcome improvement is seen with the new jobless claims numbers, essentially in line with expectations — of course, new claims reflect recent job loss, rather than the pace of hiring as such,” according to Mark Hamrick, Bankrate’s senior economic analyst. “The newly unemployed who are inclined to work should face generally positive prospects, an employment safety net, so to speak.”

He added that other indications of “solid improvement” in the job market, including steady hiring and a lower unemployment rate, but the Delta variant “could weigh on activity” through the rest of the year.

“On the downbeat side of the ledger, restaurant reservations and airline travel appear to be seeing some impacts from the surge in the Delta variant, which could weigh on economic activity here in the second half of the year,” Hamrick said. “These impacts could be quickly reversed if we see a substantial easing in the case numbers.”

Economists expected the headline number to grow 0.6% and the core to increase 0.5% in the month and 7.4% and 5.6% for the annual growth, respectively.

“The PPI for intermediate demand is accelerating even more rapidly, suggesting that the pipeline for inflation is building,” said Berenberg chief economist for the U.S., Americas and Asia Mickey Levy. “If aggregate demand remains strong, as we have been forecasting, then businesses will have flexibility to raise product prices along their supply chains and to consumers.”

He added that the “acceleration” of the PPI and high CPI “are not surprising” and consistent with “a wide array of anecdotal evidence.”

“Some of the price increases reflect supply bottlenecks; however, more and more, the mounting inflation pressures at the producer and consumer levels are taking on characteristics of traditional cyclical inflation generated by excess stimulus rather than temporary blips that will conveniently dissipate,” he said.