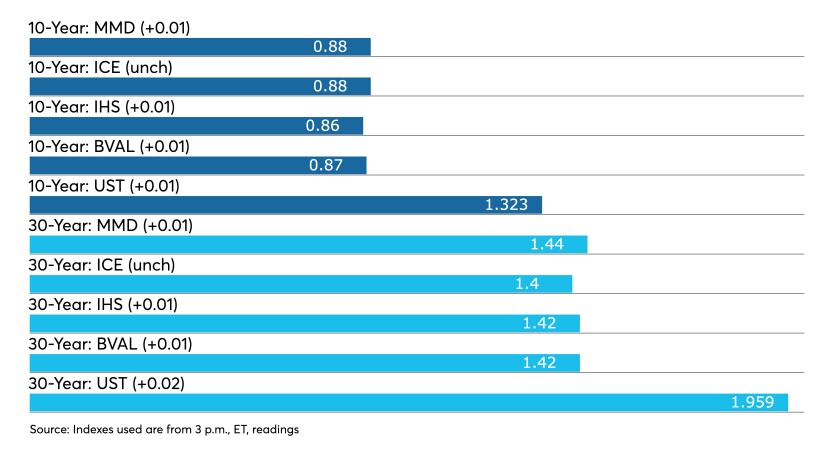 Municipals were a touch weaker to start the week as U.S. Treasury yields rose again, with the 10-year topping out at 1.32% and the 30-year creeping closer to 2% while equities were mixed on negative COVID Delta news.

Triple-A benchmarks saw cuts of one to two basis points across the curve, but still outperformed two days of UST weakness.

August returns are in the red so far with overall municipals returning -0.13%, high-yield at -0.06% and taxables at -0.50%, according to Bloomberg Barclays Indices.

Number of job openings hits record high
The number of people looking for work in the United States hit a record high in June, the Labor Department reported on Monday.

The number of job openings increased to 10.1 million in June as the job openings rate rose to 6.5%, according to the Job Openings and Labor Turnover Survey (JOLTS). The gain followed May’s 9.48 million level, a rate of 6.1% Economists surveyed by IFR Markets had expected 9.27 million new job openings.

The largest job gains were seen in professional and business services, which rose +227,000; retail trade, which was up 133,000; and accommodation and food services, which gained 121,000. The number of job openings increased the most in the South.

Also on Monday, The Conference Board reported its Employment Trends Index rose in July, the fifth straight monthly gain. The index increased to 109.80, up from 108.96 in June.

“This high mark comes off the back of nearly 1 million new jobs added in both June and July and a steep decline in the unemployment rate,” Gad Levanon, head of the board’s Labor Markets Institute, said in a statement. “However, recruiting and retention difficulties — and rapid wage growth — are expected through the summer, particularly in industries key to the reopening of the economy, such as food service and leisure and hospitality. The rapid wage growth is likely to lead to higher inflation in the coming year.”

Levanon said despite the still-high unemployment rate, many employers were having difficulty finding qualified workers.

“According to the National Federation of Independent Business, 49% of firms reported being unable to fill open positions in July — an all-time high,” he said. “For many of those currently unemployed, job-search intensity remains low due to an array of factors: enhanced unemployment benefits, fears of getting infected, a lack of childcare, and interest in pursuing and preparing for a different type of career.”

Meanwhile, consumers are expecting to see higher earnings with an easier time of find a job in the next year, according to the Federal Reserve Bank of New York’s Center for Microeconomic Data.

The Fed’s Survey of Consumer Expectations showed households’ expectations about earnings growth was positive and the likelihood of finding a job increased sharply last month.

The year ahead expected earnings growth rose 0.3% to a new high of 2.9% in July, the fourth straight monthly increase.

The perceived probability of finding a job rose to 57.0% from 54.2% in June, the fourth straight increase and the highest level since February 2020.

“I think there was a concern after the GDP number [second quarter GDP was reported up 6.5% on July 29] that we were going to start to see a little bit of drop-off in terms of economic activity and the jobs report took some of those concerns off the table,” he said on Friday.

“I think this also confirms some of the recent commentary [from the Federal Reserve] that looks to set the market up for a taper announcement over the course of the next couple of meetings,” Loh said.

He added that December or January would be a logical starting point for the start of tapering, perhaps with an announcement being made by the Fed to prepare the market after their gathering at Jackson Hole, Wyoming, or at the December meeting of the Federal Open Market Committee.

“It’s encouraging that the jobs market continues to add employment at a clip that’s pretty impressive over the course of the last two months,” he said.

He added that he thinks the recent rise in inflation will only be transitory.

“I would start to expect a slowdown in those year-over-year numbers. And from a month-over-month perspective, we think we will have seen most of the highest month-over-month prints in the last few months. So we are in the transitory camp,” he said. “It’s going to take longer than I think that we expected at the beginning of the year, but I think we’re going to continue to trend towards a more intermediate-term view where its closer to the Fed’s goals.”

Looking ahead, he said the Delta variant of the COVID-19 virus would be a challenge.

“It remains a wildcard,” he said, but added that he still expects economy activity to continue to improve.

“Longer-term, if it does have an impact of economic activity getting back to normal more slowly, I think the market will start to re-look at the rate hike schedule,” Loh said, “However it’s not going to change the taper timetable too much, barring something like another set of lockdowns, which we don’t expect.”

In the negotiated market:

The City of Lubbock, Texas (A1/A+/A+/) is set to price on Thursday $254.32 million of electric light and power system revenue bonds. BofA Securities.

The University of North Dakota is set to price on Thursday $130.4 million of certificates of participation. Stifel, Nicolaus & Company, Inc.