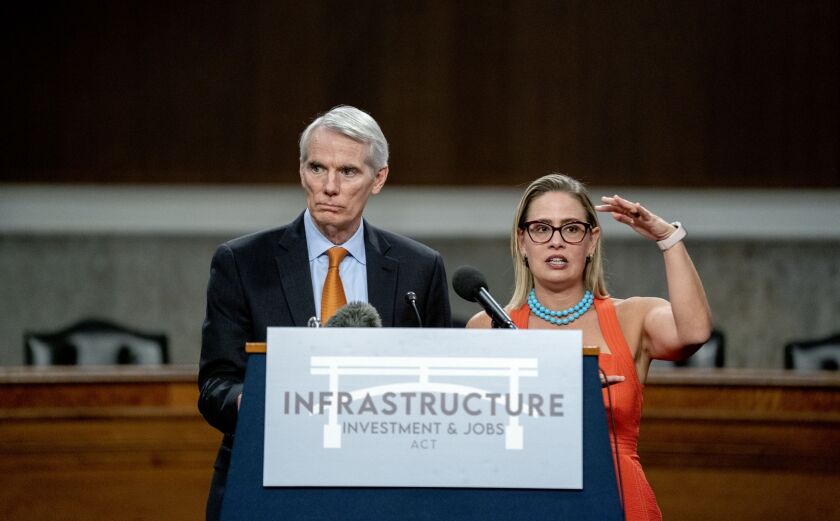 Municipal bond market participants got little of what they hoped for fromf the slimmed-down bipartisan infrastructure agreement the Senate advanced this week.

That raises the market’s stake in the outcome of Senate Democrats’ plan to move a massive social spending plan along party lines later this year.

Despite the inclusion of a few provisions applauded by public finance advocates, the Wednesday evening agreement on a bipartisan Senate infrastructure framework left the muni market disappointed.

The Senate voted 67-32 Wednesday night to advance discussion on the proposal, with 17 Republicans in support. The bill, negotiated by a bipartisan group of Senators and championed by the Biden administration, includes expanded private activity bond authority but not the reinstatement of advance refunding, a new direct-pay bond program, or other provisions considered top priority by muni lobbyists.

“While we are disappointed municipal bond financing was not further utilized in the bipartisan agreement, we applaud the Senate working group for expanding the use of private activity bonds, in particular increasing the national cap for highway bonds,” Bond Dealers of America told The Bond Buyer. “We will continue to work with our partners on the Hill, in the administration, and within the issuer community during the amendment process to promote additional vital provisions such as the reinstatement of advance refunding, raising the bank-qualified debt limit, as well creation of a new direct-pay bond exempt from sequestration and during debate surrounding the potential budget reconciliation discussions later this year.”

The $550 billion infrastructure deal, for which formal legislative text is still pending, is skinnier than the $579 billion agreement in principle announced in June. The agreement proposes to invest $110 billion of new funds for roads, bridges, and major projects, and reauthorize the surface transportation program for the next five years. It also includes $39 billion for transit, $66 billion in passenger and freight rail spending, $17 billion for ports, $25 billion for airports, and $55 billion for clean water infrastructure.

Sen. Rob Portman, R-Ohio, who was the lead Republican negotiator, said during a Wednesday night press conference that Washington has repeatedly failed to get infrastructure investment done despite overwhelming popularity with American voters.

“This time we’re going to get it done,” Portman said. “We took a first important step tonight. There are, of course, additional challenges ahead. We recognize that.”

The American Association of State Highway and Transportation Officials applauded the deal, with AASHTO executive director Jim Tymon calling it “a crucial demonstration of the solid bipartisan support for infrastructure investment.”

But the deal has its doubters. The Committee for a Responsible Federal Budget said the plan’s proposed offsets include some real pay-fors but also “phony offsets that will save little or no money.”

“Sadly, common-sense bipartisan measures like indexing the gas tax for inflation were removed from the package,” the group said.

The deal features an expansion to $30 billion the allotment of highway private activity bond authority overseen by the Department of Transportation. The original $15 billion of authority was essentially already exhausted, so this was a welcome development for issuers.

“Grants are great,” said Emily Brock, director of the Government Finance Officers Association’s federal liaison center. “And the strong focus of increasing direct aid for some traditional — and some new — infrastructure investments is exactly what the plan should do. Grants and other added funds have the potential to spur additional market activity — like if a new eligible project needs some other sort of infrastructure support, it will induce at least some issuance which is a good thing.

“An almost complete miss on bonds is extremely disappointing,” Brock continued. “Unfortunately this plan misses an historic opportunity to reestablish advance refunding and raise the ceiling on bank-qualified debt, which would have truly given a lasting resource to states and locals to make infrastructure happen.”

Charles Samuels of Mintz Levin, counsel to the National Association of Health & Educational Facilities Finance Authorities, said the muni finance community must now look toward the Senate’s plan to pass a massive $3.5 trillion “social infrastructure” agenda without Republican support later this year. Senate Democrats have stated they will use the budget reconciliation process to advance their agenda, which will allow them to pass major legislation without needing the ten Republican votes needed to reach 60 votes and prevent a filibuster blocking the bill.

“The Senate Democrats agreed, as part of paying for this package, to drop some of the private activity bonds, the direct pay bonds and the federal infrastructure bank,” Samuels said. “So we have expanded surface transportation bonds, carbon capture bonds, and broadband bonds. These are very important projects but none of the municipal finance community proposals —- advance refunding, bank qualified/small borrowers and an appropriately structured direct-pay bond provision appear to have been in play. Therefore, at this point we need to be part of the bigger budget reconciliation package.”

Muni advocates remain hopeful that the reconciliation approach and House legislation will address the public finance community’s needs. House Speaker Nancy Pelosi, D-Calif., has said she won’t take up the Senate proposal until the upper chamber also passes the larger social infrastructure bill. The House is considered very friendly to muni provisions because the tax-writing Ways and Means Committee is chaired by Rep. Richard Neal, D-Mass., a former mayor who has been consistently supportive of public finance initiatives.

“GFOA together with the rest of the public finance coalition have set our sight on our champions in the House — including House Muni Finance Caucus members and Chairman Neal, among others — where we may have the opportunity to enhance the current plan or think strategically about how reconciliation can fill the void of bond provisions that this plan has left behind,” Brock said.

In an interview earlier this week, former Clinton administration Housing and Urban Development Secretary Henry Cisneros, now vice chairman of the board of directors and equity owner at the investment bank of Siebert Williams Shank, struck an optimistic tone.

Cisneros said the stakes are very high because without these investments, American infrastructure will lag the rest of the developed world which will hurt the economy and potentially become a national security issue if potential rivals like China gain an upper hand with superior infrastructure.

Cisneros, a former mayor of San Antonio, said he believes it’s also important to approach infrastructure in a way that gives states and localities a seat at the table, because they know their needs better than the federal government does.

“We need to approach infrastructure in a way that takes those priorities and goals into account,” Cisneros said.

Developments may occur very quickly in the next few days. Senate Majority Leader Chuck Schumer, D-N.Y., has said he wants to pass the bipartisan deal and the budget resolution containing the Democrats-only proposals prior to the August recess scheduled to begin the second week of the month and run until after Labor Day.