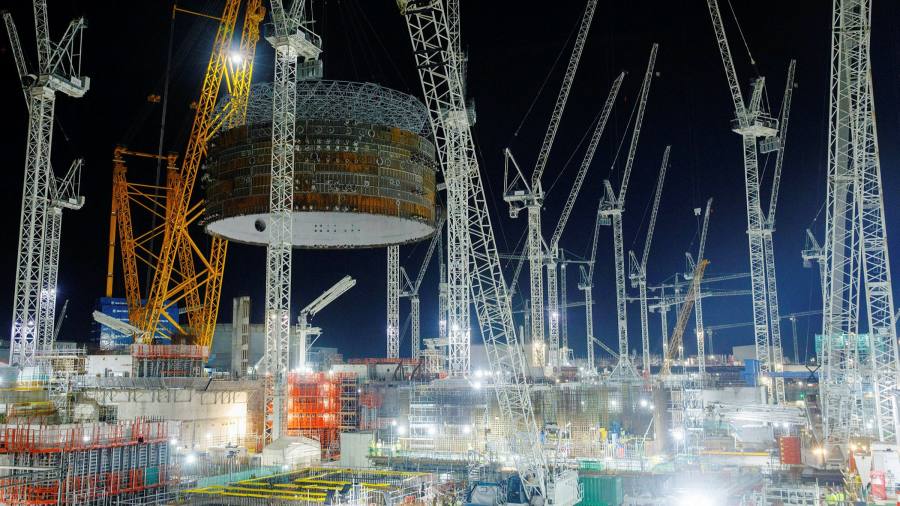 The British government is exploring ways to remove China’s state-owned nuclear energy company from all future power projects in the UK, including the consortium planning to build the new £20bn Sizewell nuclear power station in Suffolk, according to people close to the discussions.

The change in mood at the top of government also affects proposals by China General Nuclear (CGN) to build a new plant at Bradwell-on-Sea in Essex using its own reactor technology and raises questions about the UK’s future nuclear energy programme.

It follows the chilling in relations between London and Beijing in recent years over issues ranging from China’s clampdown on dissent in Hong Kong and the treatment of the Uyghur minority to its handling of the original Covid-19 outbreak in Wuhan.

Foreign secretary Dominic Raab said last year the UK could no longer conduct “business as usual” with Beijing. The most high-profile action so far has been the government’s decision to force Chinese telecoms equipment maker Huawei out of Britain’s 5G network.

The move comes as the US and its allies in Europe and Asia are increasingly discussing ways of preventing China from obtaining sensitive technology, and also making sure that they are not overly reliant on China for technology in their own supply chains or critical infrastructure.

The collaboration on nuclear power dates back to a 2015 agreement with China that was endorsed by David Cameron, the British prime minister at the time, and Chinese president Xi Jinping.

That deal envisaged that CGN would become a 20 per cent partner in the development of the planned Sizewell C plant on the Suffolk coast along with an option to participate in its construction. It also sealed Chinese investment in the 3.2 gigawatt Hinkley Point C nuclear power facility, which is currently under construction in Somerset.

Under the agreement, CGN also became the lead developer of the proposed Bradwell B plant in Essex, in which it plans to install its own Hualong HPR1000 reactor technology.

The design is currently going through the UK regulatory approval process. But one person familiar with the matter said Chinese plans to build the power plant on the coast just 50km from London were now a non-starter.

“There isn’t a chance in hell that CGN builds Bradwell,” they said, adding: “Given the approach we’ve seen to Huawei, they [Downing Street] aren’t going to be letting a Chinese company build a new nuclear power station.”

Discussions were already taking place with the lead developer of Sizewell C, the French state-backed utility, EDF about whether it could find new partners for the project, the person added.

Another person close to the discussions said Number 10 did not want CGN in either project, but was hoping the company would withdraw without any confrontation. Both CGN and EDF declined to comment.

British ministers are concerned about CGN‘s involvement in critical UK infrastructure and believe Sizewell would be viable without the involvement of the Chinese company.

This is despite EDF using the technical input of CGN engineers on Hinkley Point C, which will operate using European Pressurised Reactor technology, a Franco-German design.

CGN’s Taishan nuclear power plant in southern China is the first in the world to operate using EPR technology and more than 100 CGN engineers have been involved with Hinkley Point C, around 50 on site in Somerset.

But one nuclear expert expressed nervousness about a lack of CGN involvement in future projects involving EPRs: “It was the Chinese who built the [first operational] EPR.”

The removal of CGN from Sizewell could nevertheless help EDF attract North American infrastructure investors to the project, which nuclear industry leaders say would otherwise be problematic with Chinese involvement.

The US put CGN on an export blacklist in 2019 alleging it had stolen US technology for military purposes, while the Trump administration warned the UK against Chinese involvement in nuclear power.

Theresa May, the former prime minister, came within a “whisker” of forcing CGN out of Hinkley Point C, according to one UK government figure. May ordered a review, which allowed the Somerset project to go ahead but only with certain stringent conditions attached.

The government refused to confirm or deny that the government no longer wanted CGN taking part in the nuclear programme. “All nuclear projects in the UK are conducted under robust and independent regulation to meet the UK’s rigorous legal, regulatory and national security requirements, ensuring our interests are protected,” a spokesperson said.