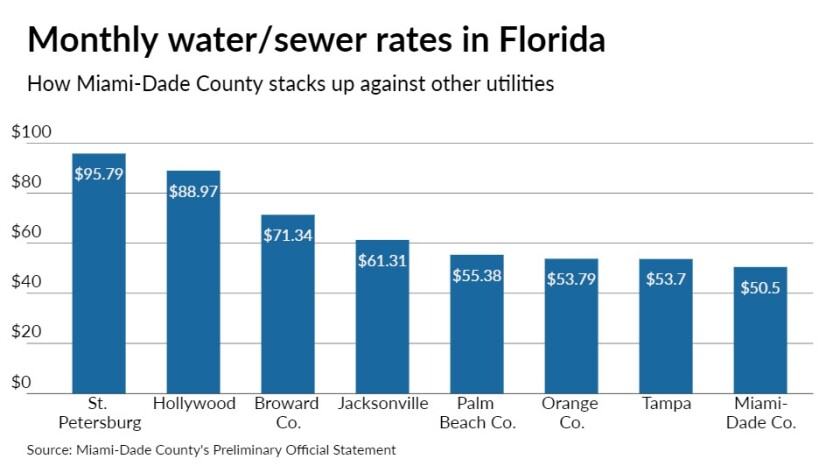 Miami-Dade County, Florida, is selling $622 million of revenue bonds this week to finance improvements to the biggest water and sewer system in the southeastern United States.

The deal arrives with a boost from Fitch Ratings, which ahead of the deal revised its outlook to positive from stable on the county’s water and sewer revenue bonds, and affirmed $3.2 billion of outstanding bonds at A-plus.

The Miami-Dade Water and Sewer Department is managing service to a rising population. It already serves almost 2.8 million county residents along with many thousands of visitors each year.

“The area continues to grow, and given the tax increases that are going to be put into place in New York, it’s reasonable to think that the area is going to continue to grow,” said John Hallacy, founder of John Hallacy Consulting LLC.

“The Miami-Dade Water and Sewer Department has made significant progress in executing its multi-billion-dollar capital improvement plan — the largest in Miami-Dade County history — which will provide system-wide capacity, assist the department to fulfill state and federal requirements, as well as hardening infrastructure for enhanced resilience,” Interim Director Josenrique Cueto, P.E., told The Bond Buyer. “The current bond sale will ensure that the department will continue to deliver on these objectives well into the future and meet our commitments to ratepayers.”

Proceeds will fund various improvements to the water and wastewater facilities and to make a deposit to the reserve account.

“The change in outlook to positive from stable is driven by expectations leverage will only modestly exceed 10 times over the next five years as a result of stronger than anticipated FADS (funds available for debt service) beginning in fiscal 2021, compared to prior expectations that suggested higher leverage of over 11 times,” Fitch said.

The bonds are rated Aa3 by Moody’s Investors Service and AA-minus by S&P Global Ratings; both assign stable outlooks.

“The significant debt plans are counterweighted by the system’s substantial customer base, low rates and good management,” Moody’s said.

In 2014, the county agreed to resolve allegations by the EPA and the state Department of Environmental Protection that it violated federal and state water pollution control laws at three wastewater treatment plants. The county agreed to make improvements to the wastewater collection and treatment system totaling $1.6 billion over 15 years. The county says more than 50% of the needed upgrades have already been completed.

Moody’s added its stable outlook reflects “management’s commitment to incrementally increase existing low rates compared to its peers on its very large customer base will enable the system to maintain its debt service coverage levels and satisfactory financial position.”

The average water bill a county resident pays each month totals $50.50, according to the POS, one of the lowest in the state. This compares to $95.79 a month for residents in St. Petersburg and $53.70 for those living in Tampa.

The capital improvement program will upgrade thousands of miles of pipes, pump stations and water and wastewater treatment plants, over the next 20 years, using new technology.

The department says the plan is expected to create about 17,000 jobs in the next 10 years, increase service capacity, improve the reliability and sustainability of the system and generate an estimated $24.9 billion in economic output.

“In terms of bonding, they have a great deal more to do on the wastewater side of the enterprise,” Hallacy said, adding that “they have all these projects scheduled so that they fully comply with the consent decrees.”

Later this year, the county expects to issue around $262 million of subordinate Series 2021 bonds for required matching funds for existing federal Water Infrastructure Finance and Innovation Act loans and for upcoming project costs, according to the preliminary official statement.

In March, County Mayor Daniella Levine Cava broke ground on a new $7.5 million drinking water laboratory at the Alexander Orr Water Treatment Plant in Sunset to increase the size of the current lab by almost three times and let the water department expand sampling and testing of the county’s drinking water supply.

The new lab will meet the state’s building code criteria and be able to withstand severe hurricanes to ensure uninterrupted operation.

The building will be LEED-certified and the construction company will use sustainable and resilient building components. The project is expected to be finished by June 2022.

The EPA requires all water utilities to produce an annual CCR which provides a snapshot of drinking water quality based on the previous year’s testing results.

“Safe, reliable drinking water has never been more on the forefront of people’s minds than these last 13 months throughout the pandemic,” Cueto said. “Not only is it necessary for drinking and cooking, but as a vital part of cleaning, disinfecting, and helping to contain the spread of communicable diseases including COVID.”

Still, Hallacy noted that one of the potential challenges WASD faced was that total account receivables increased by about $30 million, with $20 million of those unpaid bills being outstanding for over 90 days.

Under the COVID-19 State of Emergency, the disconnection of water service and late fees due to non-payment are suspended.

“They attribute that to the COVID-19 impact,” Hallacy said. “So it will be interesting to see that as the economy recovers whether that receivable backlog will improve.”

The water authority wasn’t the only Florida agency in the market this week.

On Tuesday, the Central Florida Expressway Authority issued $548 million of Series 2021 senior lien revenue refunding bonds priced by Wells Fargo Securities. The CSX deal was insured by Assured Guaranty Municipal Corp. and was expected to be rated AA by S&P based on the Assured Guaranty wrap.

The CSX, created by the state in 2014, took over control of the former Orlando-Orange County Expressway Authority. It is an independent authority and responsible for operation of toll roads and the construction and maintenance of roads in Seminole, Lake, Osceola, Orange and Brevard Counties.

CFX is also responsible for the operation of the CFX road system, which was created in 1963 and serves about 4 million residents.

So far in earnings season, companies are reporting numbers way above what Wall Street expected
US and China pledge joint action on climate change despite strained ties
Fed’s Waller says U.S. economy is ‘ready to rip’ with strong growth
Kimco Realty Adds Weingarten Realty To Its Shopping Cart
Addressing The Housing Needs Of The Returning Veterans With Symptoms Of PTSD